They don't really have a match for all the output rails in the same form factor, but it's not a bad source of current

Speaking of which, it is about time I pick up this project again... 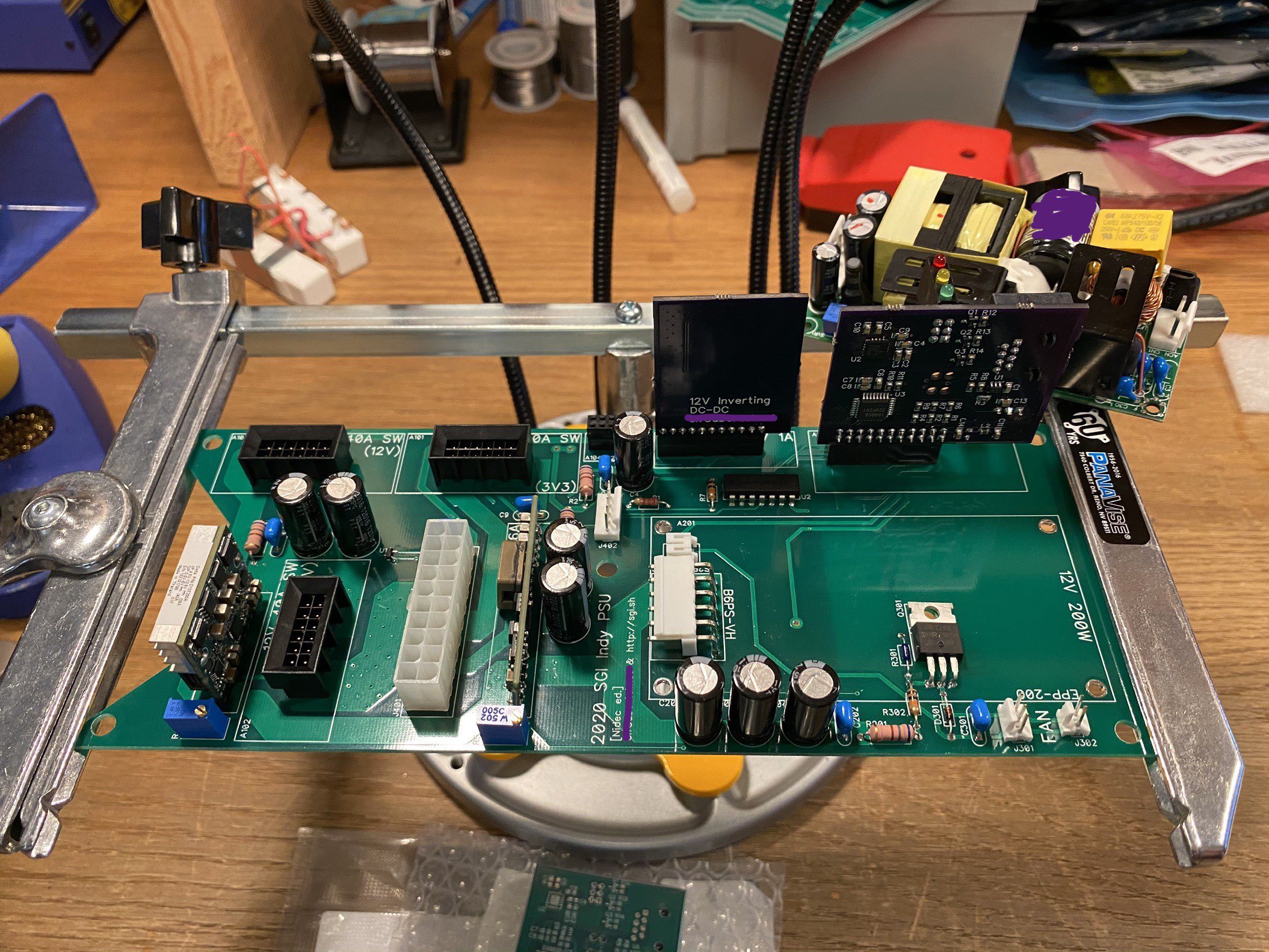 Cool, it looks like you've made a kind of power distribution backplane where you have individual modules produces the other voltages? At least that would easier to troubleshoot in the future. So you're basic plan was the get a main 12V AC-DC PSU module, then design a board that passed that 12V through and took needed 12v power to produce the other voltages. Did you have a plan to modularize the "system specific logic" of this PSU in one of those neat edge connectors? Like a plan to create a basic platform you could refactor in size and shape (for other SGIs, like the O2), and use a module to emulate the non-standard signalling lines?

Yes, more or less that

Once I get this sorted I will be reusing the same modules for an Indigo 1 supply, most likely.
Reactions: LarBob

Well, this is starting to come together. 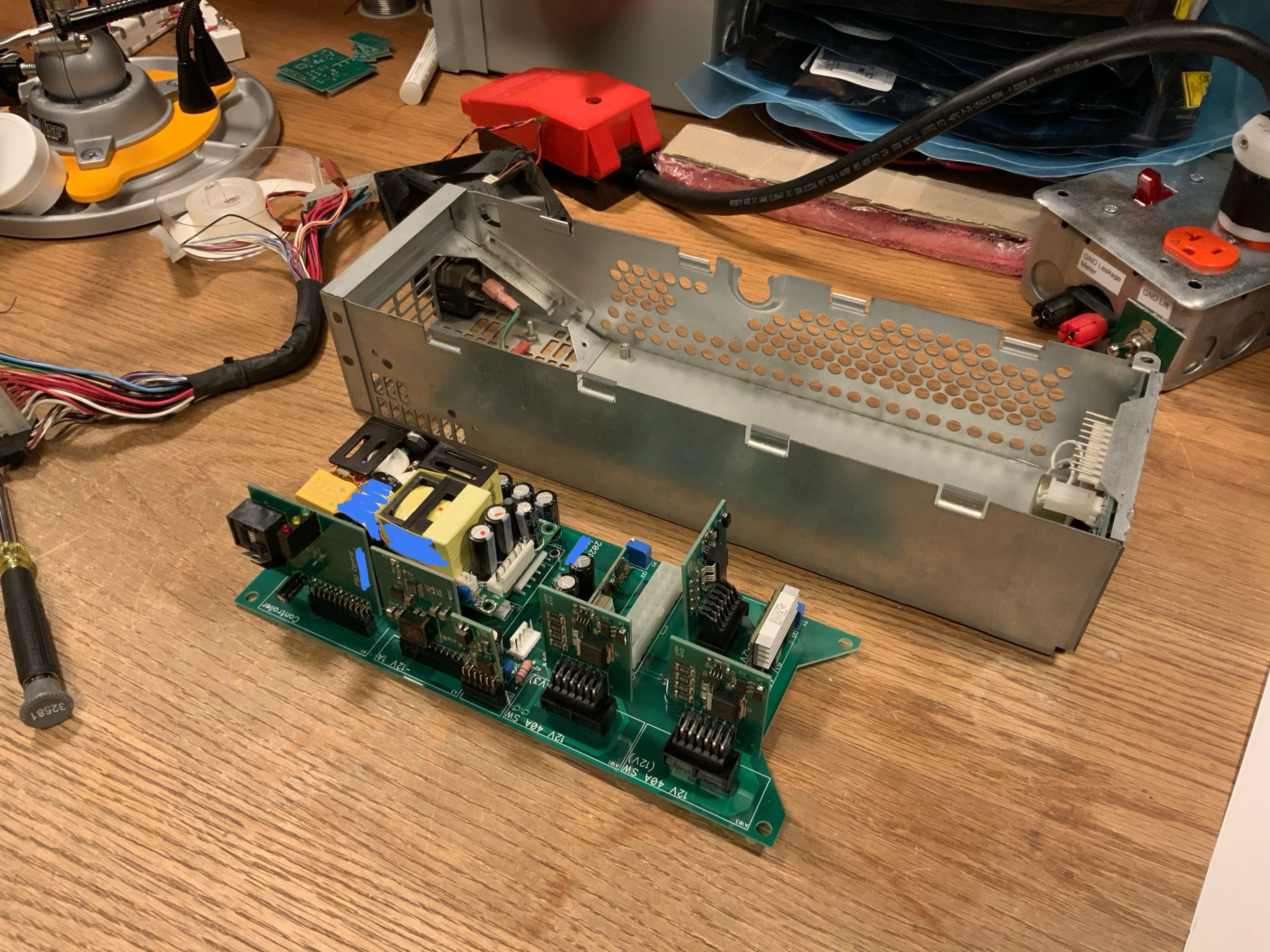 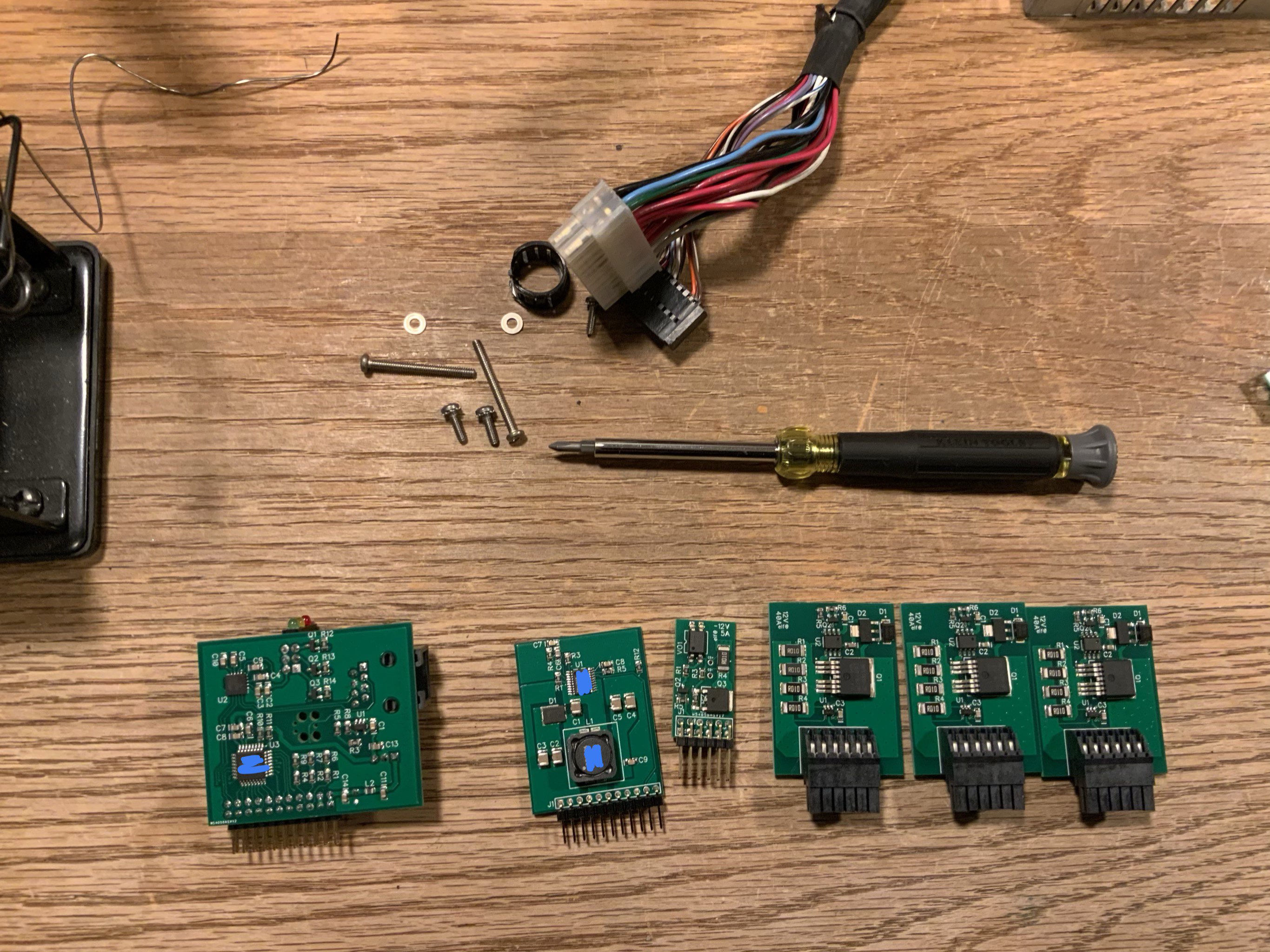 Slightly off topic but thanks for all your work measuring the outputs of the Indy PSUs!

I've been repairing a Nidec PSU which had a bad failure on the input circuitry due to a dead electrolytic. After replacing just about every semiconductor in the input side of the PSU, it seemed to work but I spent hours trying to figure out why the +12V output was only about 8.5V. Then I came across your measurements that the 12V output is low until loaded, and sure enough with a load mine is right on 12V.

Without your post I would probably never have figured that out...
Reactions: Elf

Glad I could help

I just grabbed an Indy with a Nidec power supply that's behaving strangely. PSU seems to be in OK shape; nothing visually wrong. The machine boots just fine if I don't connect the aux connector, but I get spammed with a stream of "power failures" during irix install because it's not getting the Pgood signal. If I do connect the header, nothing happens when I press the power key or anything else. Luckily, SGI used a boring header for this, so I have a bunch of jumper wires.

If I connect just Pgood (pin 4), system turns on as normal (and importantly I don't get the power failure any more, so the power supply is asserting Pgood correctly).

(At this point I also connected the speaker pins, because I wanted the startup chime!)

I'm kind of confused. The power switch is not a switch, it's just a button; it's only going to temporarily make the power switch connection. I can believe that the switch itself is somehow dead, but even if it wasn't, I'd expect it to have the same behaviour of powering off when released that I get when I just short the connection. Any thoughts?

I just repaired a couple indy Nidec PSUs, I did find ONE failed PSU power button. I did find a replacement button that works fine, I also found that when I unsoldered the button and clicked it for FUN 100+ times, I later found out the button started working again! I literally did recheck the button several times with a multimeter and provide it didn't work...yet after "playing with it". It consistently worked...

So try that, pull power to the Indy. Take the cover off, the click the power button...a lot...then a lot..then try it again with a multimeter. I might "come back to life". If you need it I can tell you what button I got, however it has a different plunger so I'm unsure the case button mates up yet...it meets all other dimensions and heights, but plunger design has a small hole on a center and has a square head, while the button height is the same as the old one. So I still have to test the mating be 100% confident.
Reactions: Elf

Will try that, thanks! I guess I assumed that the switch was a momentary switch and not a toggle, given that it just depresses and releases, but I guess that's not the case?

vvuk said:
Will try that, thanks! I guess I assumed that the switch was a momentary switch and not a toggle, given that it just depresses and releases, but I guess that's not the case?
Click to expand...

No, you’re correct. It’s a momentary switch, in my case I don’t know if it was like carbon from arching but the switch “may” have a cleaning feature so tons of actuations may have finally scrapped it off? You obviously cannot disassemble it to find out so it’s a guess.

The Indy holds a signal line to ground to prevent startup the switch just latches some kind of circuit on the Indy to float the start line (according to Elf’s docs).

if you don’t end with a working switch after playing with it, PM me and I'll send you one of the new switches I got at cost.

Also consider that as long as you’re switch is busted in the OPEN position, that all the switches on that front board are identical so I’d suggest swapping the power-on and reboot switch, as no one uses the reboot switch anyway. That would give you a working power switch.

Keep us up to date.

UPDATE: If you're uncomfortable desoldering and installing the new button, I've done it several times, and if you want I can just do the board for you at cost (assuming you're in the continental USA, shipping-wise). The biggest issue for that is getting the board out of the PSU case, there are three screws and one is kind of blocked by the PSU daughterboard, it's hard to get there, you can kind of do it with a 1/4 bit phillips bit and a 1/4 ratchet. Only one of the three screws is hard to reach, but it's the one behind the power/reset switch. You could then mail me the board and I can just do the work and ship it back to you, takes 15 minutes in all so, no labor costs, just pay for the switch and shipping.
Last edited: Aug 29, 2021

No issues desoldering Haven’t tested it yet, but I’m surprised by the behaviour I saw (not with the switch) of the Indy powering off when I stopped connecting the power switch & switch common. That's the bit that confuses me; I'd expect it to just power on and stay on.

Everything else seems to work including thankfully the temperature sensor, so worst case I can wire up a different switch. But.. just weird. Will report when I can investigate tomorrow.

Sorry, it's hard for me to tell what's going on based on the description you gave, as I cannot tell what you've connected and what you've omitted. All I can say is:

1. The power button works by shorting the two CLOSEST legs/pins together on a single side/edge of the square housing of the button (NOT the ground leg/pin, it's not ground, it's body ground for shock purposes), pin pairs are on opposite sides of the button, but same elevation, they are the same pin (on each side of the button they are duplicated) and electrically connected all the time (lower R to lower L , higher R to higher L on L/R sides). So you're shorting a pair of pins to another pair (higher to lower pair). Each side of the button has half of each pair (that short together, i.e Lower R shorts to Higher R, just like Lower L shorts to Higher L when button is pressed). So when you're testing it, it needs to be the two of the legs on either side of the button that should short together only when pressed.

2. Assuming you fully connect both connections from the PSU to the Indy, I would agree that shorting what the power button shorts (above statement) should correctly turn it on and off as you intend...if you're jumping wires and not placing the entire IDC connector onto the board, I cannot say.

3. Also assuming your button failed OPEN and not closed. Closed would hold it the signal line incorrectly.
Reactions: Elf

Quite possible the switch contacts have just oxidized over the years as well. I would second @weblacky 's advice about testing and/or replacing the (momentary) switch. Regarding the Indy turning off when the lines are disconnected, you might look to see if there is some sort of pull-up or pull-down arrangement on the board, which could explain it. I'd check myself, but I don't have one accessible at the moment! (Not at home)

Are there any visible or audible signs to look out for that indicate when a Nidec PSU is dying? Or do they just go kaput with no warning?

Sometimes they will whine/hiss which can certainly indicate impending failure, however I would not say that an audible indicator of failure will always be present (or is even likely to be present) for ones that are dying. The best way to tell would be electrically, or just to do preventative maintenance.
Reactions: GameBreaker64

Thanks for the detailed write-up @Elf. I have a somewhat related question: the fan in my Sony PSU is running at full speed constantly. No temperature-specific throttling is happening, even though CPU / memory / main board are barely warm to the touch.

Any idea how to start debugging this? I think I have identified the thermistor you've mentioned - it's labeled "U8" on my R5000SC CPU board. Is there a way to check if it is still "good"?

I have a multimeter, a soldering iron, and a nonexistent background in EE, so any pointers would be greatly appreciated

Ah, you could measure:
All in all though it may not be worth debugging, you might want to just connect the fan directly to 12V with some sort of speed controller and set it to your taste. If you set it to a speed with reasonable airflow it will usually be faster than the Sony supply will spin it anyways.

Well, I just opened up the PSU and even to the untrained eye *this* didn't look quite right... It certainly was an easy fix though.

But now that Indy is all nice and quiet again, I hear quite a bit of static noise coming from the built-in speaker every time I move the mouse and with certain GPU operations. I expect this to be an RF shielding issue somewhere... ? 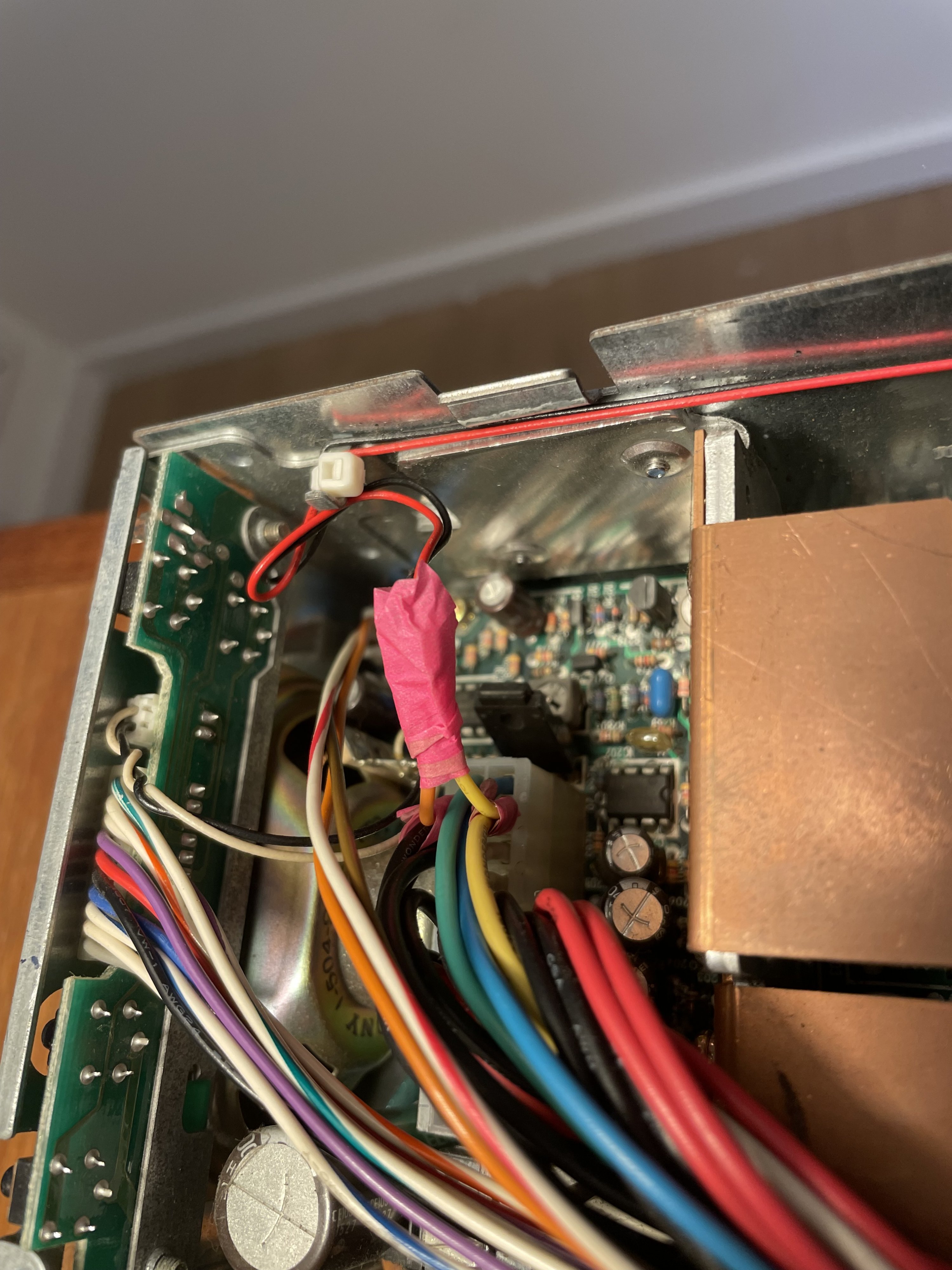 Regarding the static: possibly, or just the power supply or something on the motherboard getting old (electrolytics drying out etc.), where varying current draw will cause some noise and sag. It might be worth looking at what the rails are doing, ideally on a scope, or at least measuring the AC component while this is going on. At that point one could also probe around the audio amplifier.
You must log in or register to reply here.
Share:
Facebook Twitter Reddit Link
Top Bottom