I've got a little story to share.. about a month ago I bought an Octane2, unknown specs and unknown condition, but well, you rarely find SGI hardware in my country so I just had to buy it.
Today I drove all the way down to the french speaking part of Switzerland to pick up that machine.

On the way to the sellers home address, I suddenly noticed that his location is not that far away from the place where the SiliconGraphics factory and office used to be, where they assembled SGI machines for europe. I started thinking about this.. is the seller aware of this coincidence.. or.. maybe the seller could be an ex SGI employee..? How cool would that be!!

And yes.. turns out that nice guy used to work for SGI Switzerland in some kind of "tech pre-sales" team, and the Octane2 I acquired was owned by SGI! It even has the original box, packaging, and the DHL packing slip.. it was shipped almost exactly on this day in 2004 between SGI offices. 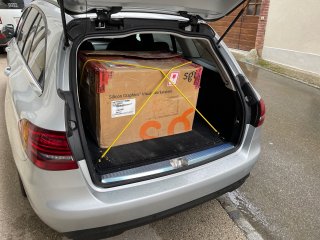 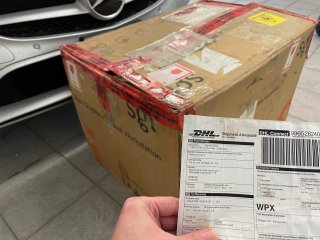 The Octane2 was an "SGI Loaner" demo machine, even has that sticker on the back panel. On the way home I was pretty excited, because I didn't assume their loaners had the cheapest specs

I chatted with him for quite some time and it was fun to hear some old SGI stories.. for instance, when they closed the factory in Switzerland (before SGI filed for bankruptcy), it was too expensive to ship all the remaining machines back to the U.S. and throwing away was also no option because the recycling fees in Switzerland were too expensive. So they just gave away all those machines for free.. and one ended in his cellar, untouched since. 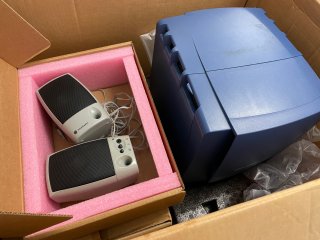 This evening I just did a quick test.. the octane2 does not start up yet, but the PSU is ok. I have not yet done any further research.. I'm too tired after a whole day of driving.
I hope it's nothing serious as the motherboard is fully loaded with dual CPU and all RAM banks filled. If I'm unable to figure out what's wrong, I might come back asking for some clues.. 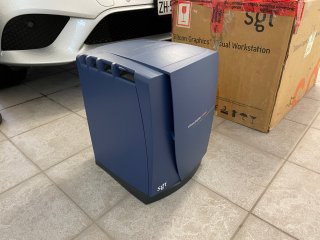 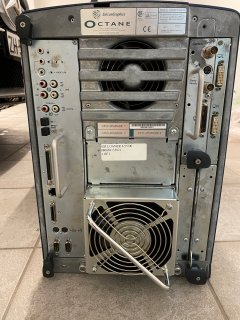 At minimum you have a VPRO with DCD card! Very nice. As it was a demo machine I suspect V10 or V12

Looks very nice! Congrats.... I'd carefully pull all the backplane connectors and given them a good cleaning, inspect the boards and go from there. I assume it's been sitting for some time (like decade plus) so make sure nothing has exploded with age. the time keeper is almost certainly dead.

quick update: PSU is OK, mobo is OK, but the GFX card seems to have issues. With this GFX card inserted, the power button has no effect. When I insert another GFX card, the machine starts up!

the gfx board does not contain "user serviceable parts".. no clunky condensators or such that could go mad, to swap like in a PSU..
any idea what I could check? the (fragile) connector has no visible damage, and besides that I'm out of ideas what to look for.. it's just SMD pieces everywhere, nothing that looks suspicious..

btw I found a spec sheet printed by SGI where the gfx board is listed as "V8" with a hand written note "(original)", so I'm not sure yet if this is a V8, or if the V8 was exchanged later (don't have the experience by looking at the boards and can't verify in hinv yet..)
the spec sheet also mentions dual 300MHz R12k and 2.5 GB RAM.
Reactions: Geoman

Wow - a very unique machine - with a rich back story and even a DCD-module!

and it was a

@flexion - seems to be a bit of moisture corrosion on the outer casing so I may suspect the power rail connectors on the graphics board... Perhaps lay your Octane flat on a soft surface, like a sofa, then pull the graphics / put in / pull / put in a few times. I had to do this once on mine and it fixed it for me

Yes I hope it was not this kind of loaner

With the faulty gfx board inserted, when you press the power button, you can hear that relais „clack“ sound from the PSU and like a second or two later the clack sound again and PSU shuts off.
I think the gfx board is drawing too much current and causes the PSU to stop. There is a slight burned smell coming from the gfx board after this procedure.

I looked with the magnifying glass but could not see any suspicious smd parts.
Last edited: May 3, 2021

Perhaps you could remove the DCD board from the graphics card. If there is a fault on the DCD then it might work.
Reactions: flexion

stormy said:
Perhaps you could remove the DCD board from the graphics card. If there is a fault on the DCD then it might work.
Click to expand...

Good idea, thanks! I tried it, but unfortunately still the same problem.

Maybe that "cooler spray" trick would be nice now to find out which region on the card is heating up.
Reactions: Elf

V12's have a huge power draw on them and a flaky power supply might not be able to handle it.

I'm not 100% sure about the source of the smell. It was hardly noticeable.

I have tested again with another PSU.. it also does not start, although the relay click sound is slightly different. took more than 2 sec for the second relay click.


- the machine won't start with this card inserted. no LEDs. no spinning fan.. just two times the relay clicking noise.
- without this card, or with a different card -> starts up, LEDs on and fan spinning and display output is OK

Coolant spray, thermal camera, or (more guesswork) an IR thermometer might reveal the area of the issue. Great find by the way!
Reactions: flexion

I had a closer look again after yesterdays attempts and noticed two of the connectors pins are now slightly "burned". this wasn't the case before and I'd better don't try to start again with the card inserted.

That thing mounted on the backside of the card with a large heat sink looks like it contains copper wires that could go bad over time. It's attached to the board on at least 8 rather heavy soldered points, not sure if it's worth removing that one for further investigation? 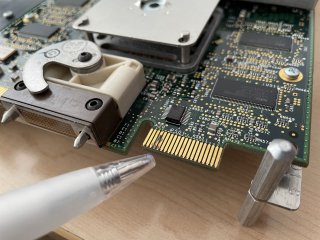 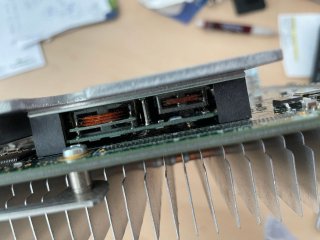 That looks to be a VRM.

Does there appear to be any damage to the connector on the front plane?
Reactions: Elf

Irinikus said:
That looks to be a VRM.

Does there appear to be any damage to the connector on the front plane?
Click to expand...

so this could be the part to investigate further. Sticker says "International Power Devices Inc. SG2S2402.5". I'm not yet sure if I should attempt to unsolder it.

connectors still look ok.. I was able to clean them. 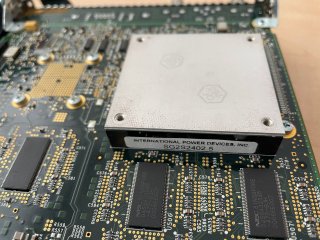 Just another data point to add to the conversation...the Vpro graphics boards require 24V, whereas none of the other graphics boards for the Octane do. I used to have a pinout of the XIO power connector in the Octane somewhere, but it was handwritten on paper and I have moved three times since then, so I wouldn't hold your breath that I can find it. I compiled it myself by very carefully probing each pin of the connector on the backside (non-connector side) of the frontplane. I used this info many years ago to get an Origin 3000 X-Brick to accept a VPro graphics board, essentially turning it into a V-Brick.

I get video out when I insert an IMPACTSR. unfortunately I don't have another VPro to try.
but lack of 24V from the PSU would probably not cause a burned connector? I rather think there is a short circuit somewhere in the power regulator on the card?
A pinout diagram would be very cool for testing. I'm scared to put the card in again, I've just ordered another spare PSU from the US, where shipping is almost as expensive as the PSU itself, and don't want to ruin it

Might be a good idea to spray some contact cleaner into the slot where the card goes, where the burn happened. This suggests there could have been debris in the slot that caused a temporary short, which would explain that burn.

thanks everyone for all the suggestions.

Checked and cleaned connectors again, also the four golden PSU pins, tried the card in two different Octane models (Octane1 and Octane2), with two different PSUs (both are VPro compatible according to part numbers 060-0035-00x). Same symptoms.
I assume this card would also run in an Octane 1 model? I don't want to put this new Octane2 at risk while testing and I've got more than one Octane1.
Last edited: May 4, 2021
You must log in or register to reply here.
Share:
Facebook Twitter Reddit Link
Top Bottom