After a bit of research I managed to patch the Advanced Visualizer 4.2 "build_key" to make any time period (10 year etc.) or no expiry licenses. This is great, as build_key works for several packages, including older versions (19 are listed when running build_key).

First use the previously mentioned patch to get the password to generate demo keys:

Time limited:
For time limited licenses you need to patch the demo key time, here I change the 1-day license which "Licenser" uses when you enter "demo" in the code field.

Even easier - with this patch "no expire" licenses are always generated.

You are our new hope for rescue old software. When I have some free time I'll try again install this awesome TAV 4.2.
Last edited: Aug 13, 2020

Finally I'd make a fresh install of Irix5.3 and TAV4.2 and finally I can make it works. First I have a stupid problem with date, my batt is out and my SGI lives in 1970 by default, I need change date to 1996 to correctly make demo key. My other stupid problem was I'm using "./build_key -D" and the correct is "./build_key -d" the ID is different when you use -D or -d , in your guide you write "-D".
Now I need try with unlimited time patch.
Last edited: Aug 12, 2020
Reactions: Ginzanix

kikems said:
Finally I'd make a fresh install of Irix5.3 and TAV4.2 and finally I can make it works. First I have a stupid problem with date, my batt is out and my SGI lives in 1970 by default, I need change date to 1996 to correctly make demo key. My other stupid problem was I'm using "./build_key -D" and the correct is "./build_key -d" the ID is different when you use -D or -d , in your guide you write "-D".
Now I need try with unlimited time patch.
Click to expand...

Great, let us know if you can get it to work. I had a lot of problems setting up correct paths and got some strange errors - though I'm running it on an emulated Indy. Will try to install on my O2.

build_key -d generates 1-day licenses. I modified this option to generate a custom time limit (20 years or whatever you like), and also the patch for "no expiry" licenses modifies this option. The "Licenser" tool also uses the "1-day" option (or patched version of the 1-day license) when you enter "demo" as the encryption key.

build_key -D generates 30-day licenses. I don't think there is any point to use this when we can generate longer time licenses, though maybe I was unclear earlier.

It seems "build_key" may set a flag in the demo licenses which I have not patched - when starting the software I get a "warning: license will expire in X days", even when generating keys expiring 10 years in the future or with "no expiry". Should be possible to fix this, though I think its just cosmetic, and the software still runs.

Great, I didn't notice you have to set up the Wavefront account using the setup program/utils. This was causing some errors when I tried to set up the user environment manually. I also changed the date from 1994 to 1996, and now I get no warnings regarding license expiry... seems everything works!

I'd also note that there are some bonus licenses which are not included if you run "Licenser" and enter "demo". These can be made manually later by running build_key -d.

There is also a small mistake in the patch script - the first patch does not "# remove "interrogate security key" function and license checksum error", but prints the password for generating demo keys. 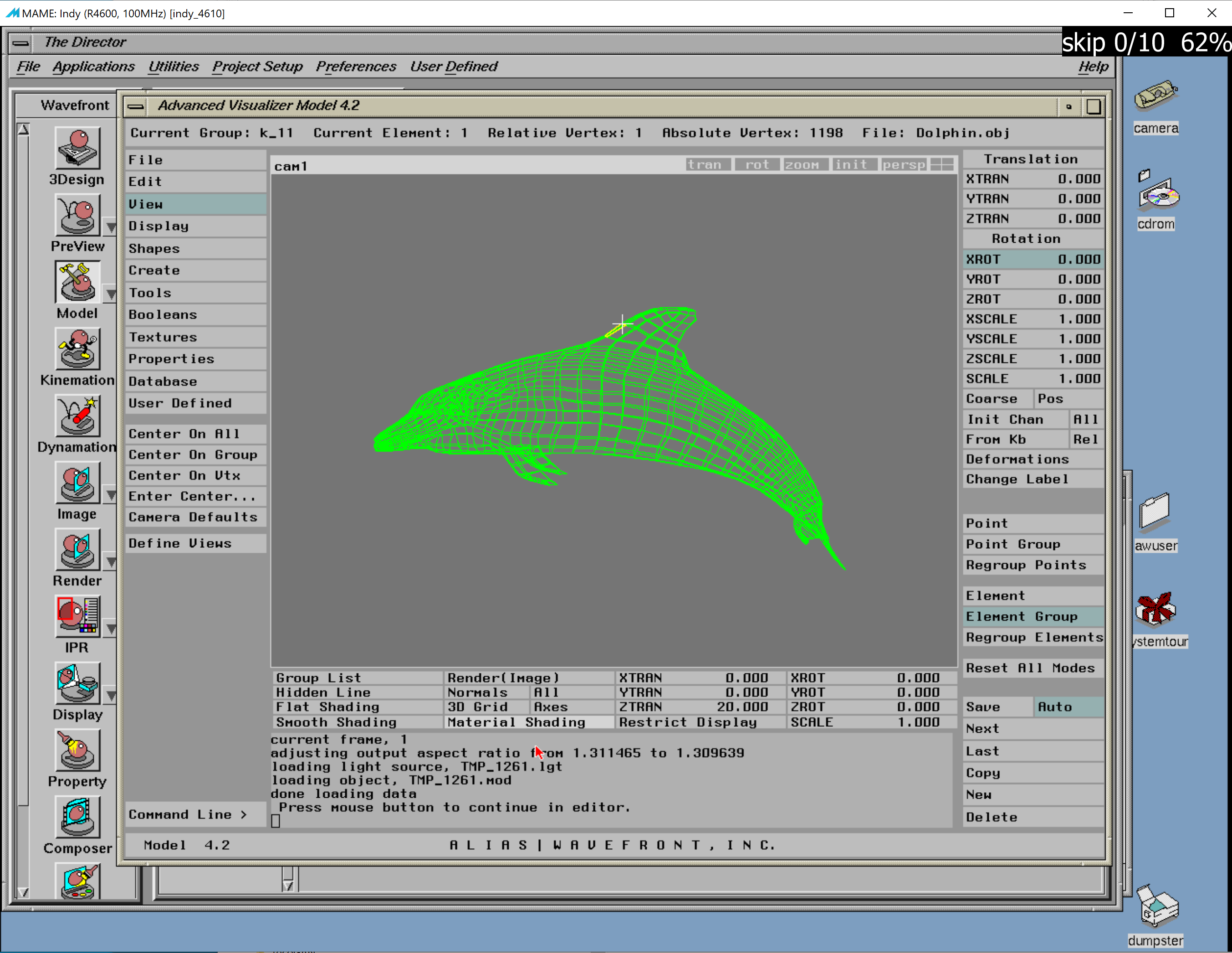 I found some executables not licensed in the Alias3 patch, tomorrow I'll test it on Irix 4 and explain the errors. For example not possible show rendered images because exe file used for it is not licensed and not work Raycaster mode because not licensed module. All other features of Alias3 apparently works.
Reactions: Ginzanix

After few test, final render not works in Raycast mode ( exit render with error code -1) , raytrace works but when try to show rendering image the alias app try call to usr/alias/sys/install/en for a valid encripted string .

For try it , load a model, go to Main menu -> render tab -> in render button open "control" window -> in render button choose raytrace or raycast. When render starts try use "show" button in control window ( this will be show rendering image in progress ) .

Here is a new version of the Alias 3 (actually PowerAnimator v4) patch, now including patches for all the binaries with licensing! There are still some tiny licensing complaints from one or two binaries regarding the user interface (printer settings?), but I don't think it has any effect. Also need to fix the beta/time limit messages on starting Alias3, will see in the next version.

Rendering seems to work now (ignore the errors due to MAME emulation!). 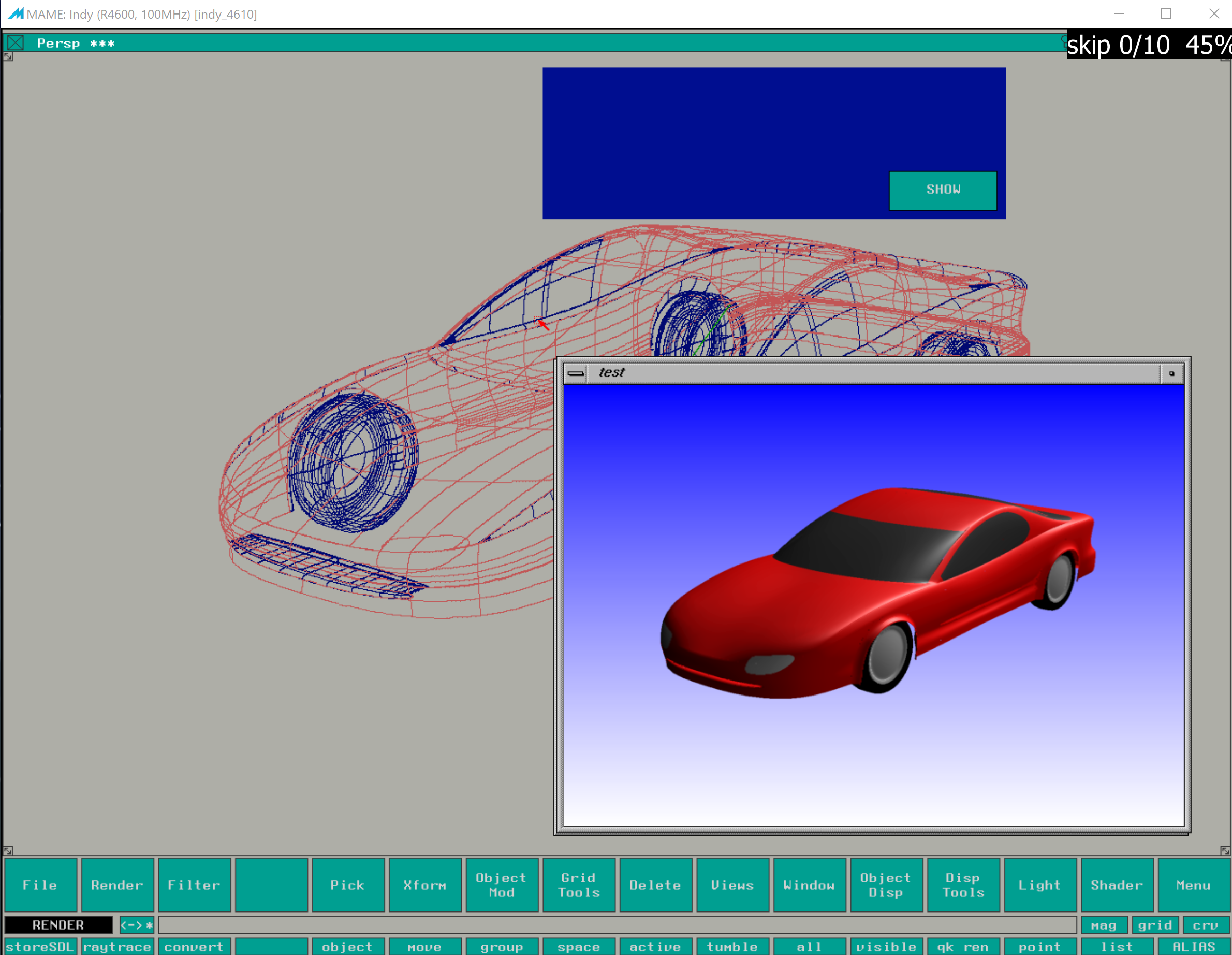