Since laptops are much lighter than an Octane, the only real way you can sit on the couch and fiddle is by trying out X11 forwarding. Here are some of my notes!

Toolchest, system manager, and a few of the preference apps work fine. Icon catalog does not launch, and leaves us with this error:


Code:
Looks like another Mac user trying to talk to an SGI is having trouble as well. At this point I thought, let's see if it's XQuartz -- so I grabbed the latest Ubuntu OVA and loaded it up in VMware Fusion.

Maybe not directly related, but if you don't want to go digging around for a flash disk and/or reboot just to try out Xorg:

Launching toolchest again yields this, which is not the most fun discovery after sinking about 40 min into getting the VM guest on my LAN. 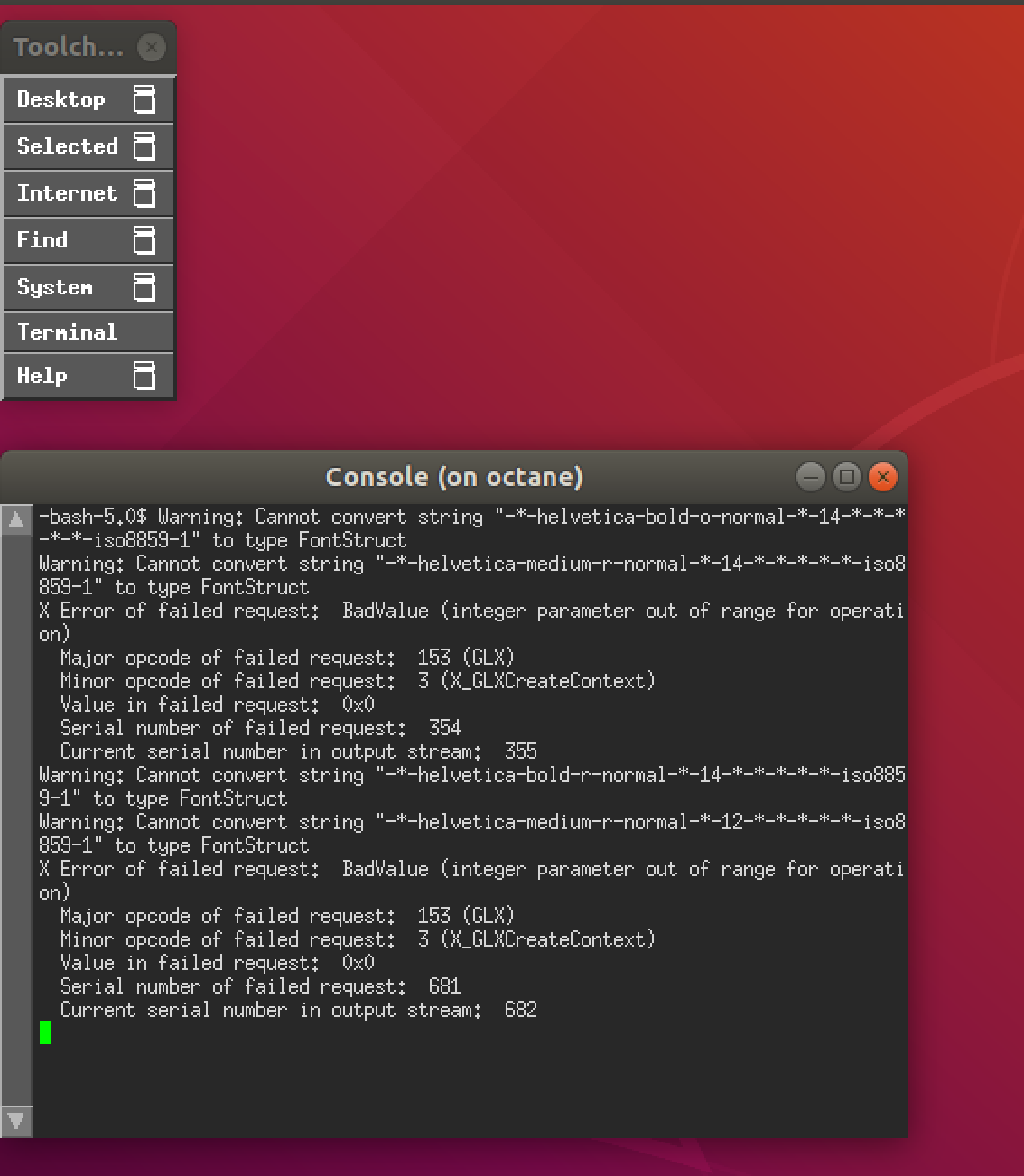 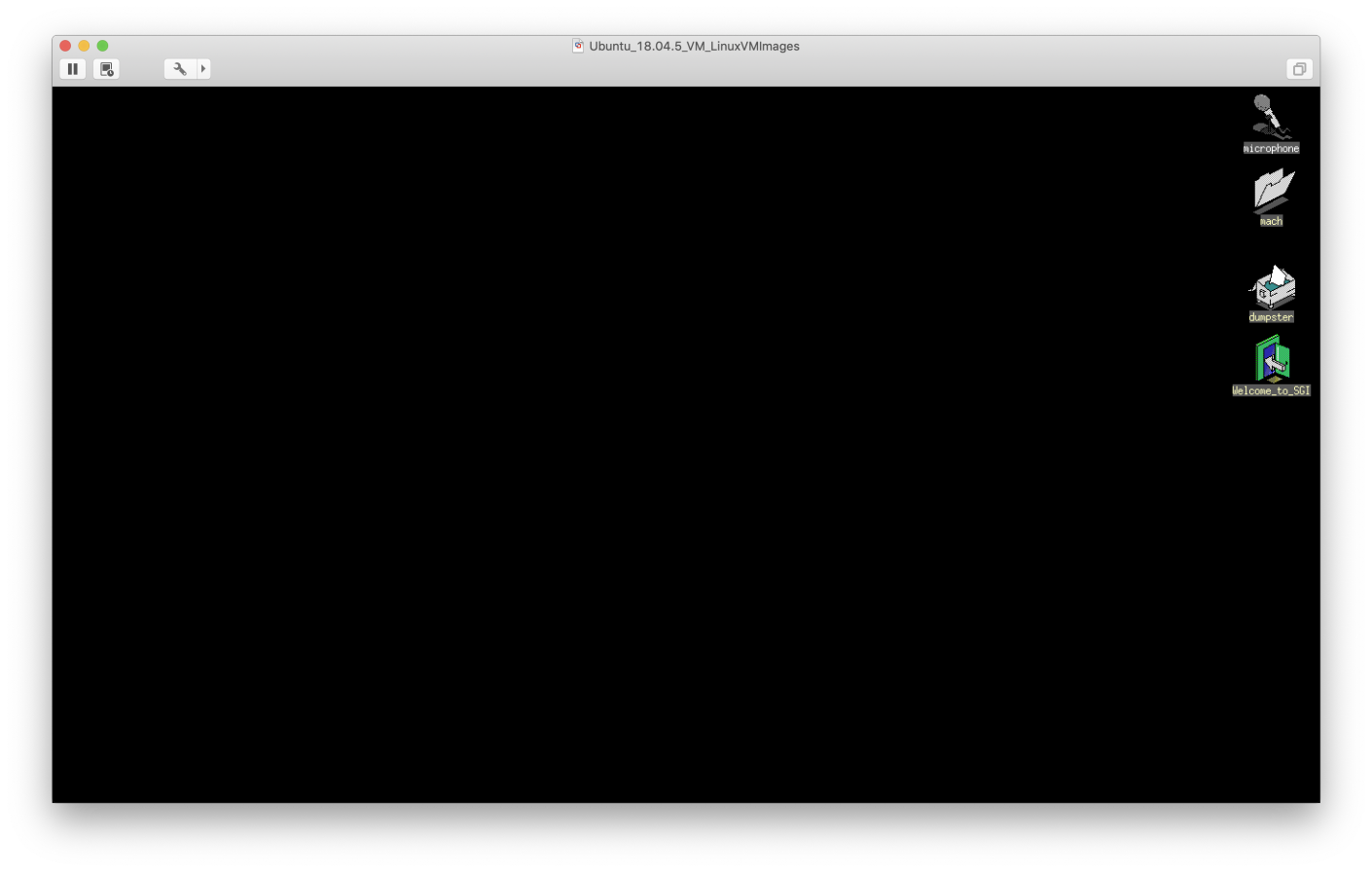 It launches, but takes over GNOME in a spectacular (read: terrible) fashion. The system is unusable and I can't even switch to a tty, so I kill the VM. On reboot, I decide to install Fluxbox: there's no fancy compositor to upset. Upon restarting gdm, something good happened:

After killing the VM a third time I decided to try again after logging into Fluxbox. And would you look at that! 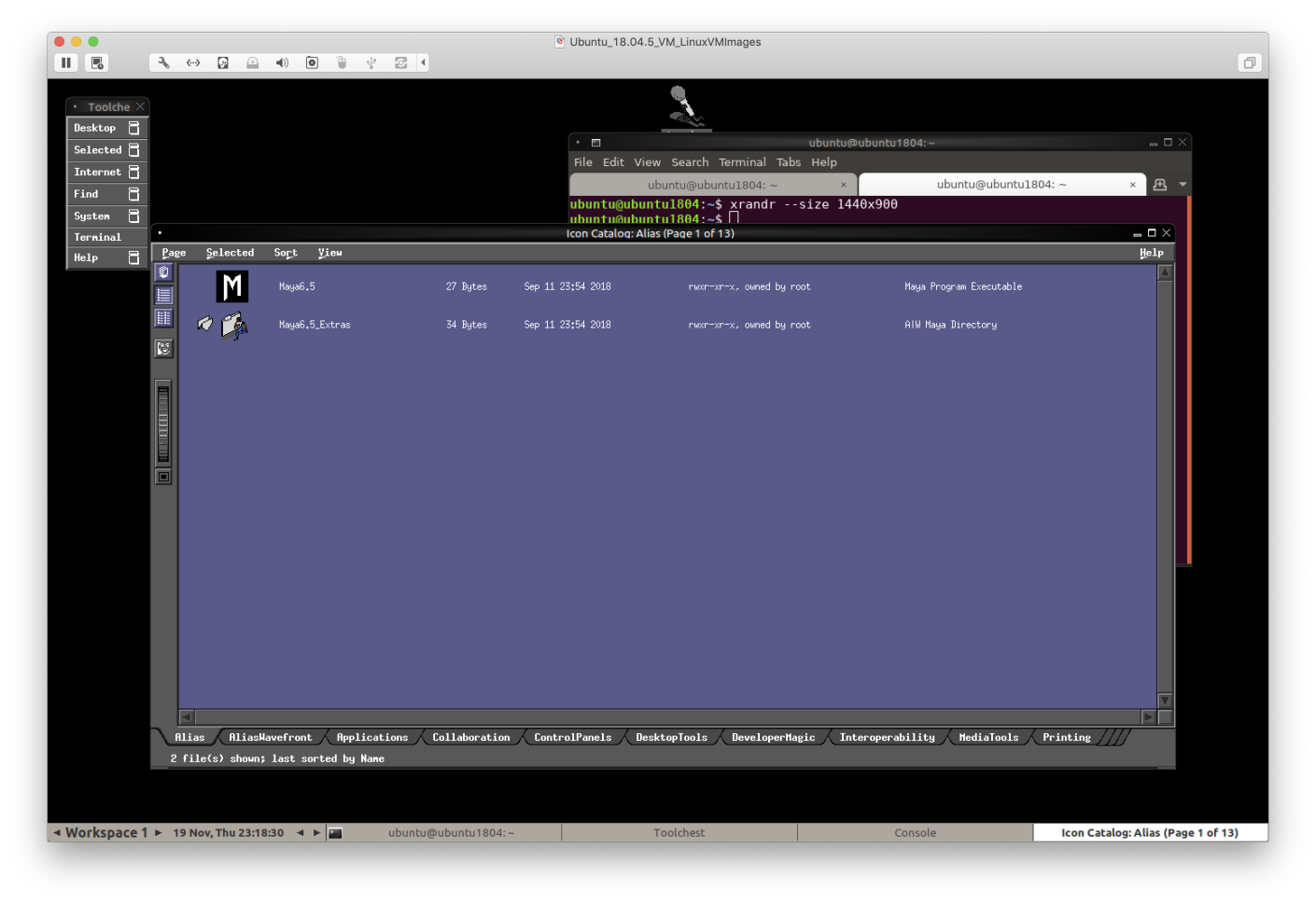 There's the icon catalog in all its glory! I did try the XQuartz instructions to no avail, but it would be nice if we could get this working with native macOS X11. Otherwise, if anyone is interested in taking this journey, hope that these notes helped!

Very cool; how is performance in general?

Elf said:
Very cool; how is performance in general?
Click to expand...

Pretty decent, widely varies based on application. Mozilla works unless you resize the window. Everything else is pretty snappy surprisingly!

Tried this suggestion just now for XQuartz but no dice: https://bugs.freedesktop.org/show_bug.cgi?id=96261

There is also this doc here, which lists a last working version of iglx + XQuartz: https://www.visitusers.org/index.php?title=Re-enabling_INdirect_glx_on_your_X_server
Reactions: Elf

nice! I simply use Xnest in ubuntu to launch a remote x-session. works quite well, but of course only for "2D" apps.

Yes- Mach your suggestion to use fluxbox finally got XDM working. It's GDM and gnome which has been blocking things for a while and preventing a working XDM login. I setup a more classic Ubuntu one that is a little more light-weight (Ubuntu 10.04) and it works great. By setup I mean I created this in Vmware Fusion on my MacPro. I used bridged networking.

After you install the VM and re-direct the repos to the 'old-' urls and install fluxbox, you choose it when logging in. Then use xrandr to setup a proper screensize for the VM on the Mac. Then use Xnest with a good geometry setting and you have the entire 4DM experience ready to use!

Then you get this: 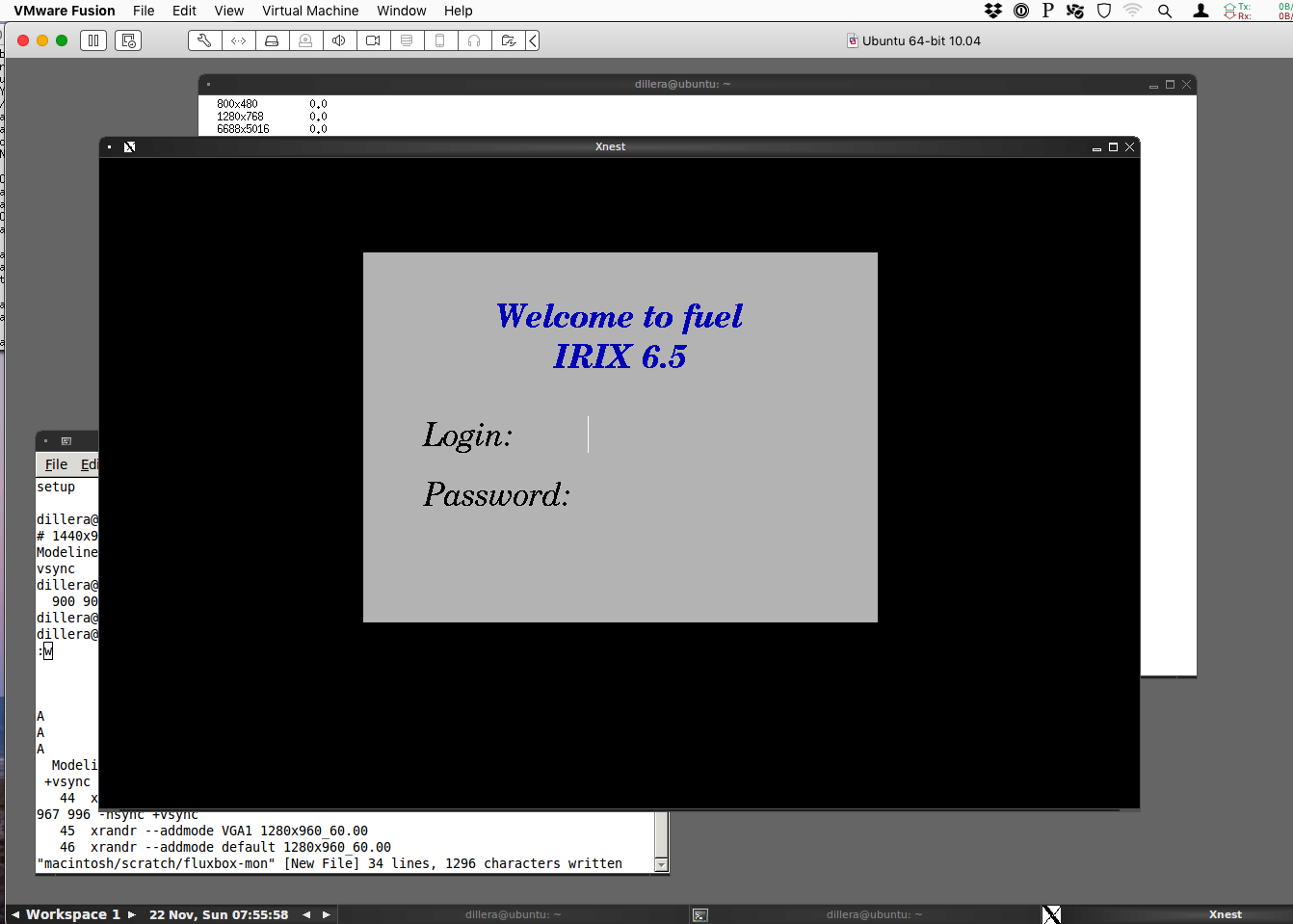 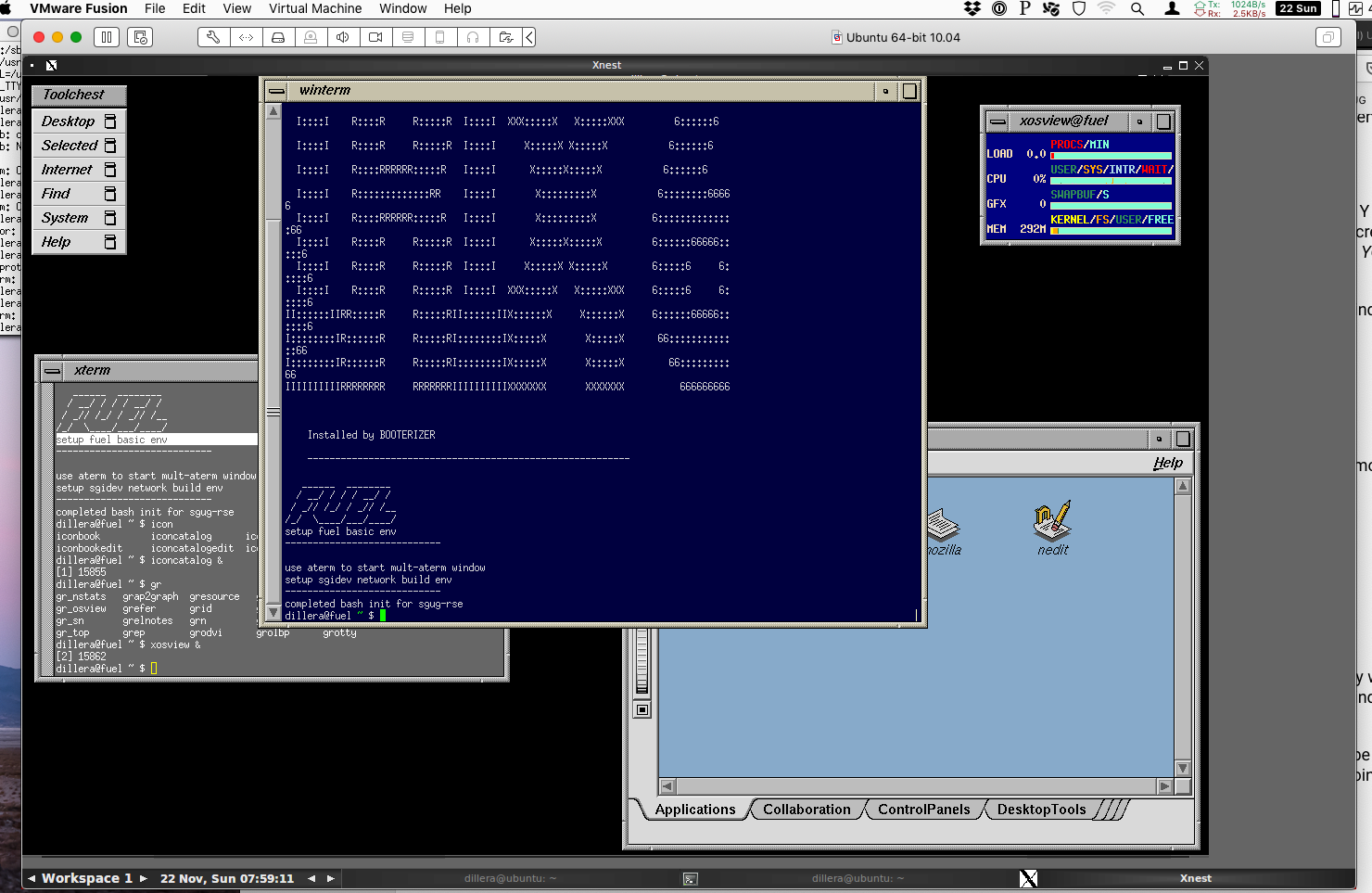 Thanks Mach for the breakthru!