More hands are contributing to RSE, and I wanted to shoot around some ideas for managing our WIP packages. I think that everybody pushing to a wip branch with this many members may be reaching its ceiling. I don't know if this is just me (everyone, please chime in!), however I think the following may be things to look out for:
Things we've tried:
Also -- I guess it would also be worth talking about what we do before cutting a new release? What's the strategy to move packages from WIP to a (probably protected) RC or next release branch?

For a little bit of background: (and of course we are free to change things / alter the deal as we see fit, Han).

Here's the criteria that was used to get packages into 0.0.5 (criteria to go from WIP to a "released" package): 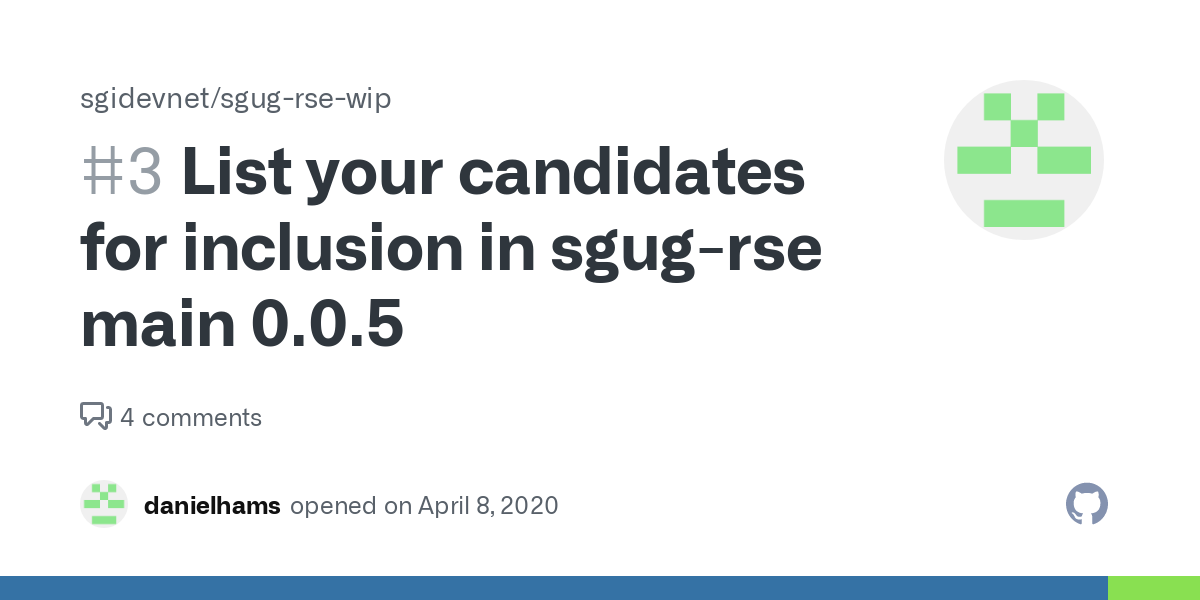 List your candidates for inclusion in sgug-rse main 0.0.5 · Issue #3 · sgidevnet/sgug-rse-wip

A place to track what we'd like to see moved from here (sgug-rse-wip) into main (sgug-rse) for the 0.0.5 release. I'd personally like that sgug-rse isn't quite the free-for-all that sgu...

I'd be lying to say that the packages in 0.0.5 were properly reviewed by a second person -> so maybe we want to get rid of the review?

So that's the principle behind the "release" trees - WIP was created as a dumping ground for `.spec` files that didn't meet the quality bar for the above. Original as a repo, and then today as the WIP branch itself.

Because WIP project has traditionally had no barrier, that's exactly how it has been on the branch, too -> everyone takes whatever approach works for them on the WIP branch.


mach_kernel said:
Sometimes more than one head is needed to debug a package because stuff is tedious. People will want to finish a package locally before pushing to WIP -- sending one another snippets isn't a super scalable process (as opposed to collaborating on a new branch for that package). Going back and forth with commits on WIP to debug one thing specifically may also not be the easiest workflow (plus, makes a lot of meaningless history).
Click to expand...

Yep, branches work great for that - other options are personal repo + the branches there too


mach_kernel said:
Pushing incomplete packages to WIP may make it difficult for us to "cut" a new release once we are satisfied with what is staged: we need a second round of QA which IMO could be done making PRs on a pkg-by-pkg basis
Click to expand...

Define "incomplete" .-) By that I mean it's a perspective thing about what is complete or what varying levels of broken are, right?

The only place where we've historically had a minimum quality barrier is for the moving to a release. If we make it so that nothing can get into WIP without a "quality review" - IMO all that will do is push the WIP bits somewhere else.

I see your motivation - my concern is that WIP becomes a new "reviewed packages only" place - and thus we push WIP somewhere else.


mach_kernel said:
Staging packages for merge into WIP would put pressure on completing them, making it easier to depend on other things in WIP with some degree of confidence
Click to expand...

Dunno - maybe we have different expectations of what WIP is or is not. Maybe your beef here would be solved by people putting more effort into getting packages "cleaned up and pushed to release N+1" ?


mach_kernel said:
Also -- I guess it would also be worth talking about what we do before cutting a new release? What's the strategy to move packages from WIP to a (probably protected) RC or next release branch?
Click to expand...

Cutting a release has previously worked like this:
The above approach isn't going to work any more I'm afraid. Each package needs to be built "clean room" - so we'll need a new approach.

(By clean room - I mean I've noticed that you can't install all the SRPMs at the same time - some of the SRPMs have collisions in the files they place in ~/rpmbuild/SOURCES - which causes build errors).

Q1) Are we in a state in WIP where we feel it's a good time to make that snapshot?
Q2) Off the top of my head, what's the status of:


Code:
There may be more, feel free to chime in. It'd be nice to make a snapshot after these, but maybe we just go ahead and create the 0.0.6 branch anyway.

Feedback welcomed, including "how about doing this another way, ass" .-)

FYI - for the automated check ins:

1) Are these automated check-ins actually of fc31 stuff? I found the version of python-decorator (auto) checked in looks like it is fc32 -> maybe there are others?

For now I've created the branch "wipnonautomated" where I'm basing my commits until we resolve the issues above. 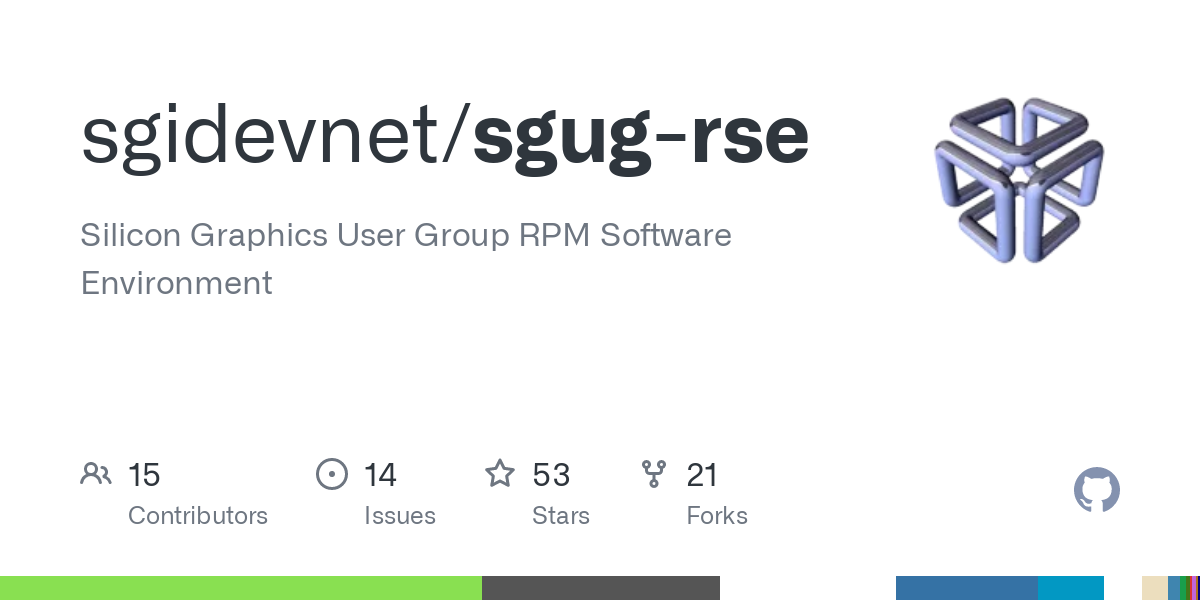 @hammy: the automated checkins are mostly @mach_kernel and lately @Unxmaal I believe. I'll point them this way

Regarding copying things between branches, this may be a naive question, but are they not mergeable? (merge WIP branch into mainline branch and cut release branch)

@Elf yeah, it's no biggie, I understand the joy of wanting to get more stuff included. We'll work something out. Let's give the guys a chance to see if I'm talking crap about the fc32 versions .-)

Far as I can tell at a minimum we might need to re-org our github layout a bit to not have quite so many packages all at one level.

We very much need acceptance criteria for 'stable' specs. Here's some:

If we can agree on some of these criteria, we next need a script to scan potential packages for meeting criteria.

Elf said:
Regarding copying things between branches, this may be a naive question, but are they not mergeable? (merge WIP branch into mainline branch and cut release branch)
Click to expand...

@Elf - sorry I did mean to respond to this, but got distracted with trying to work out how to cherry pick stuff in git.

Indeed they _are_ mergeable, and that's exactly how I propose we do the "merge to master" when 0.0.6 is ready.

But to _create_ the 0.0.6 branch, we just create that branch from the point in the WIP branch we want to (or, as I'm feeling right now, from the wipnonautomated branch).

Mainline branch doesn't get updated until 0.0.6 is ready + released - until then, it represents "last stable".

Unxmaal said:
We very much need acceptance criteria for 'stable' specs. Here's some:
Click to expand...

Are these intended to replace / supplement or other the criteria I linked we used for 0.0.5?

(And I'm not certain I agree with "the spec does not have items commented out. they're removed instead").

1) Are these automated check-ins actually of fc31 stuff? I found the version of python-decorator (auto) checked in looks like it is fc32 -> maybe there are others?

For now I've created the branch "wipnonautomated" where I'm basing my commits until we resolve the issues above.

We've rolled back the automated commits and have parked that effort for now.

I feel having multiple WIP branches can be confusing.