So at some point within the last week or so while my machine was off, it seems that my Octane2's 747W Cherokee PSU decided to die. The machine just won't power on, no fanspin or anything. After pulling the PSU out, it seems that the death was caused by some sort of a short to GND by these 3 pins. There 3 pins are connected to some sort of +V red wires internally, although I'm unsure of the voltages. 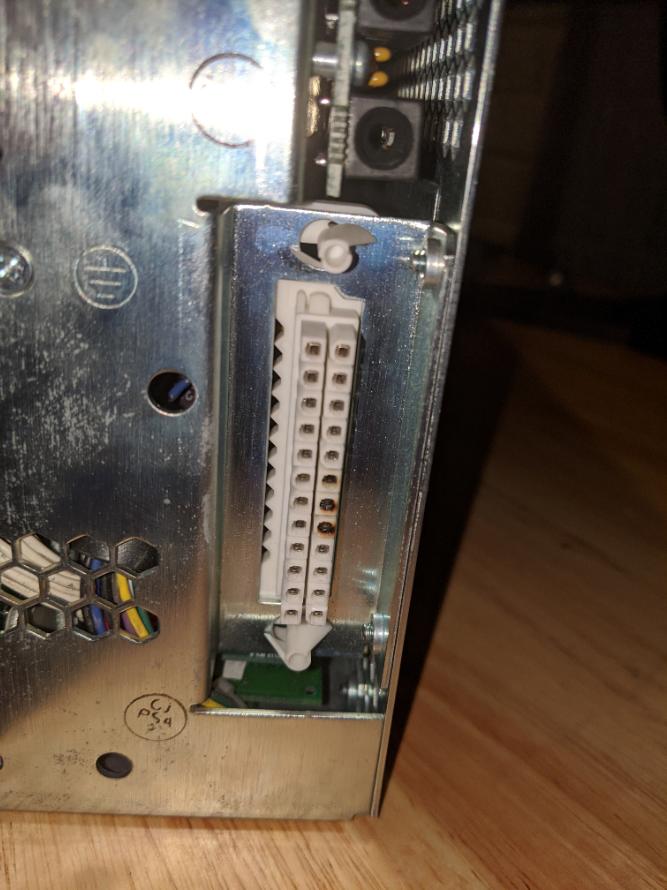 As for the internals of the PSU it doesn't seem like any of the capacitors have been damaged and they look rather clean. No leaking capacitors. However, I did notice that one of the two fuses on the AC input had been blown, as it had a resistance of 490kOhms when measured in-circuit. 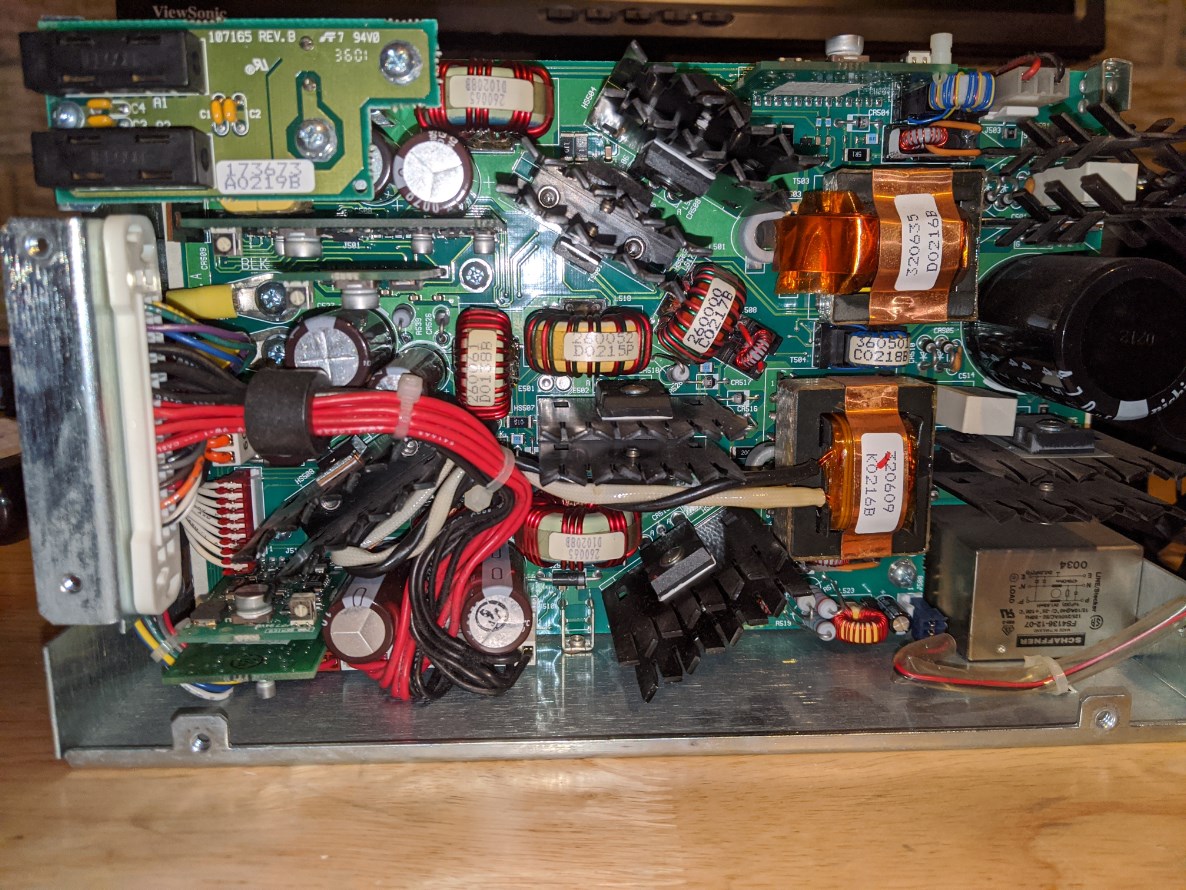 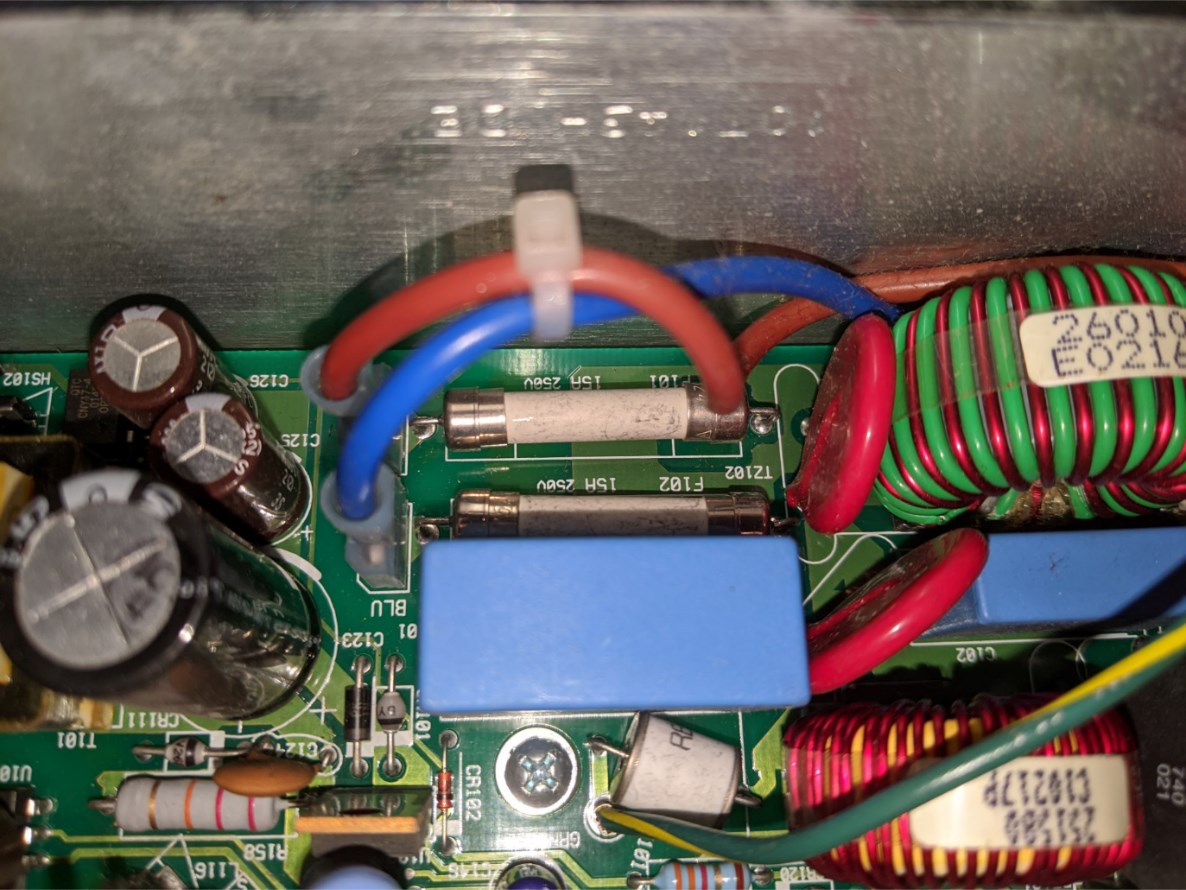 As for what actually caused it, I don't know. All the components on the frontplane look fine. The one exception to this is this tantalum capacitor, which had a fair amount of black residue on it, most of which I scrubbed off with isopropyl alcohol in an attempt to read the bottom number. Conductivity tests with a multimeter show that this capacitor is tied to the pins that were burned (through what, I don't know, however). Perhaps this capacitor developed an internal short of some sort? I'd have to pull it off the frontplane to measure the capacitance.

I've got a few different ideas so far:
1. Buy a new PSU. This is probably the simplest option. My main concern is that if there's something wrong on the frontplane, it'll burn out the new PSU.
2. Try and repair the PSU and/or replace the cap on the frontplane. Other than the fuse, I'm not sure what needs to be replaced yet - possibly a MOSFET?
3. Just replace both the frontplane and the PSU. I really don't want to have to do this and would prefer if I could fix at least one of them.

Does anyone have any suggestions of what I should try and look for when trying to repair this? It's a fairly good Octane2 so I'd really like to try and save it.

Those red lines are almost certainly the main +12V switched power lines. The main 3.3V and 5V power are carried by the large spikes that interface the frontplane. It doesn't make sense to me that there would be a short between those two 12V lines, more likely is there was an overcurrent draw on the 12V bus somewhere downstream.

Have you pulled the frontplane? If there was enough current to blow that fuse and melt those connectors, there will more than likely be traces of damage to the power traces on the backplane that could help you trace the fault. With any luck it's limited to the frontplane.

Sorry for your loss!

Edit: After re-reading your post, did you actually see a short to ground (or evidence of it) internal to the PSU from the two red lines? In the photos the wires looked great and the damage appeared limited to only the pins for the two red wires.

I would be very suspicious of the frontplane until you pull it, visually inspect it, and test for ground shorts on the 12V lines. Unfortunately, it may be something that's only shorted when the standby power is present, which is very difficult to test in-situ on the Octane without tearing into the front of the case.
Last edited: May 5, 2020

As @callahan suggested it can be difficult to discern if something else is shorting things out, but, that said, if there is an easy short it will be immediately apparent so it is worth checking. Tantalums can fail short although they also usually accompany that with some fireworks from the capacitor itself.

As an initial step I would:
I don't currently have one of my PSU summaries for the Octane, but it might nearly be time for me to make one if only to assist with things like testing the PSU you have there. @onre wanted me to characterize the fans as well, so I can probably do both while I have one disassembled...
Reactions: jenna64bit

Have you pulled the frontplane? If there was enough current to blow that fuse and melt those connectors, there will more than likely be traces of damage to the power traces on the backplane that could help you trace the fault. With any luck it's limited to the frontplane.
Click to expand...

Yes, I've pulled the frontplane out, but as I said, I don't see any obvious signs of damage, other than that weird blackening on the one capacitor which I apparently forgot to post a picture of, so here you go 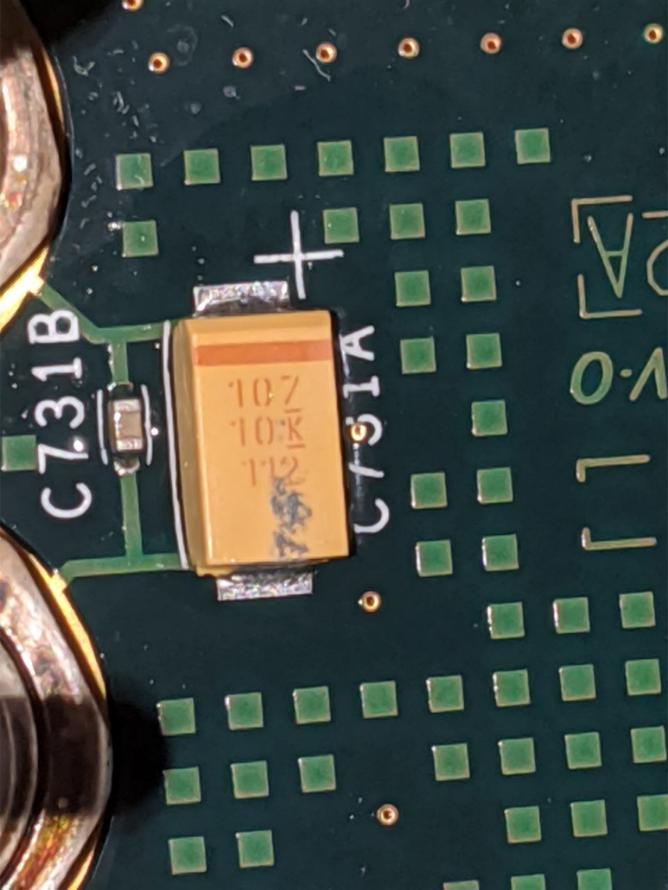 However, assuming what you said is correct

I think that it's rather strange, as there's apparently a connection between those 3 pins and that tantalum cap, despite the cap being off one of the pairs of large spikes. The codes on it would also say that the cap is only rated for +10V, so that's rather odd. Perhaps something on the frontplane shorted that connection, so that seems mildly concerning.

I don't know if I really made this clear either, but the whole thing died while the system was off. I turned it off sunday night about a week ago, and by the time I got back to it on saturday morning, it wouldn't turn on.

On my late-ish model Octane (new "sgi" logo), the stock fans were:

@Xav101-- Interesting follow-up. I assumed those were 12v because the large posts carry 3.3v and 5v. I could be wrong of course. Also missed that the tantalum cap was on the frontplane, my mistake. Looks like that cap is between 5V and ground, right? Pulled out an old picture of my (working) frontplane (not nearly as zoomed in) and funny enough it had a smudge/scrape at a about the same spot, but was free of any other residue. Probably a coincidence ... but I wonder if it has come into contact with a case rivet or something.

Would love to find a wiring diagram for these (or any other SGI PSU) some day. Until then, massive kudos to @Elf for reversing the PSU pinouts.

Interesting follow-up. I assumed those were 12v because the large posts carry 3.3v and 5v.
Click to expand...

Yeah, I've read that there are in fact 12V and 24V rails on the PSU, but I think there are also other 3.45V and 5V rails as well. I also know that a lot of these old PSUs don't tend to function the best when there isn't much of a load on them (hence the resistance heater in the Vault M). In that case, maybe these pins are bridged to those rails to provide a stable voltage that the system can use to start up all the components, then once the system is up enough that there's enough of a load for the main rails to function correctly, the majority of the load would be drawn from them?

I think the easiest way to confirm or deny this would be for someone with a known functional frontplane to test the conductivity between those pairs of pins and that cap/the large spikes by it. If anyone could do that for me it would probably help me narrow this down.

Here's another image of the burnt pins on the frontplane, if it helps. 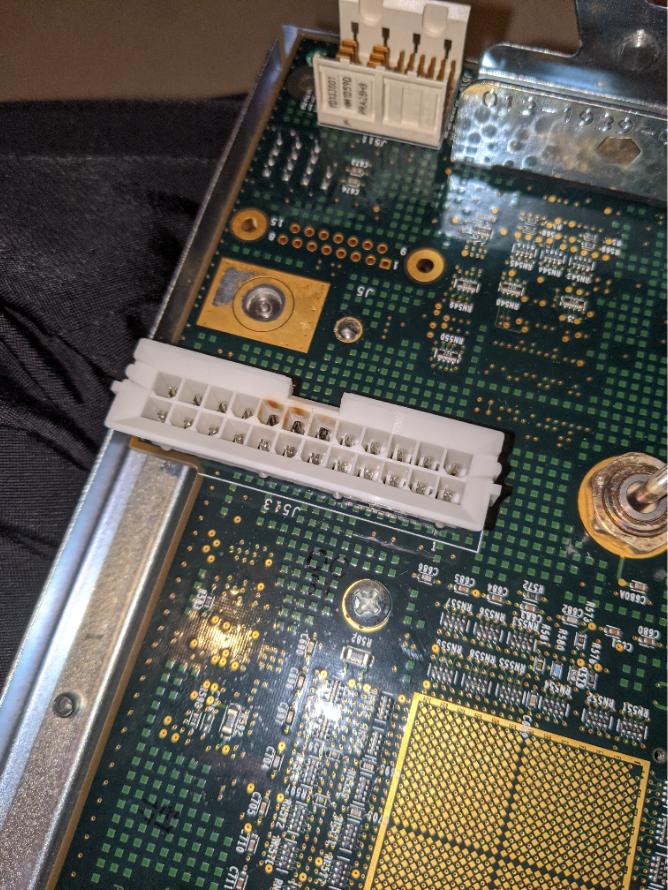 Just pulled out my spare (mostly working) Octane to test. The results were ... odd. Hopefully someone with more experience with PSU's can chime in.

I found fairly low resistance (all in the fully powered off state) between the frontplane pins corresponding to the red wires and both the +5V and ground lugs. Circa 30-40 ohms to ground (the top lug) and circa 150 ohms to the +5V lug. Same resistances to the cap, unsurprisingly. I used the black lead on the PSU socket and the red lead on the large lugs (despite having a graduate degree in physics, the customary +/- notations for different circuit types vex me to this day). I did measure ~2M Ohms to the chassis, so that's nice.

On a whim, I also tested continuity of the PSU itself (when disconnected from the frontplane) and found ~30-50 ohm loads between pretty much every power rail, other power rails, and the female ground lug connectors. Makes no sense to me, but it works when I turn it on.

On the power supply side there are also generally various different paths between rails that either have some sort of resistance or are sinking current (e.g. via capacitors). In general the resistances are not really too meaningful, as long as they do not indicate a short. For example, see the complex network of components between rails in the attached (random) forward converter PSU schematic, and all the non-linear components involved.