A while back when visiting an ex-SGI employee, I obtained three NTT Indys. These were not the usual "branded" configuration of the Indy, but instead are black with the NTT logo, and are in a set-top box configuration with an IR port on front and a custom video board, with composite outputs and an ATM network connection.

The story about these NTT Indys that I was told, was that SGI collaborated with NTT (the Japanese telecom) to develop them as an ATM video conferencing solution. NTT would provide the ATM network, and SGI would provide the hardware. The ex-SGI employee I talked to was a member of the project (as well as the WebForce project, etc.). Apparently the video conferencing initiative never panned out, but he still had three of the prototype units.

I will put up pictures eventually (and Ciao has some, as well as one of the units I gave to him), however it's worth noting that it's not just the hardware in these units that is custom, but also the boot PROM as well.

Here is what is presented over the serial console at boot time:

Code:
The machines want to boot over the network and do not contain a hard drive or any local IRIX installation:

Code:
They also output a bit of video out from the composite graphics port, which I will capture and upload here along with pictures of the unit, at a later date.

It's also worth mentioning that Ciao's unit has some problems with the serial console that mine does not. I suspect timing issues, as the text is often corrupted / garbled, with occasionally readable sections. Perhaps a slipping UART clock? 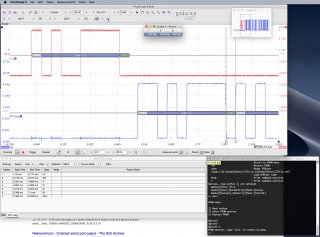 Would be good to get a dump of this to MogMiner/Moogly so we could get the ROMs added into MAME.

It is definitely on my to-do list to dump ROMs before I let any more prototypes/oddities go.

@Elf Have you gotten around to taking photos of the NTT Indy's boot menu?

From what I saw it doesn't output any video over the 13W3 connector but it's worth a 2nd look.

Well, you said it works with Composite so that's another way

The composite output comes from a separate board that isn't a regular graphics adapter and thus would not show the PROM boot menu or any IRIX boot messages / login screen. There is likely special software and drivers on whatever the netbooted image would be that determine what to display from the composite output and how to deal with the inputs.

Ciao took a picture of the composite output, below: 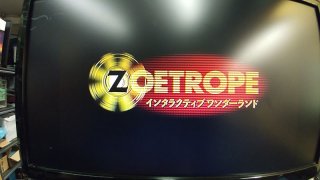 Ah okay. I saw you posted that in the Discord recently

I had one of these set top boxes, back in the day, but it didn't have a black case. The case was normal Indy blue but zero badges or logos. At the time I was looking for R4400 and R5k cpu modules and remember being quite dis-appointed with both the R4600-133 and the video board not being usable in Irix.

Good evening! It's been a few months since I've played around with the NTT Indy system, but I'll share some of my experiences with it here. Let's start off with a picture of the case.

Internally, the NTT Indy is a stock Indy for the most part: the motherboard and CPU are normal, and predictably rather low end. (R4600, 133mhz, 16mb RAM.) There are no physical provisions to install a floptical drive nor a hard drive internally: the normal mounting cage for a hard drive isn't present inside.

Beyond the custom boot ROM, the main component that makes the NTT Indy special is the "Bambi" daughterboard, which is a large single-height GIO32 board that takes up much of the space inside of the system. It provides composite video input/output/passthrough, an integrated Fore ATM network interface, an infrared receiver (presumably for some sort of remote control), and a few other functions. Here's an internal picture of the system with the Bambi board installed. 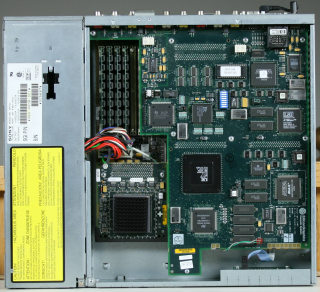 Here's a close-up view of the ports at the back of the system.

The ports on the top row are all connected to the Bambi board. Ports A1 and A2 are intended to be connected with an audio patch cable, and ports B1 and B2 are also wired together via a separate cable. Elf thankfully has one instance of the B1 to B2 cable, which I was able to pin out while I was visiting. It's also worth mentioning that the usual keyboard and mouse ports are present on the motherboard itself -- but they are blocked by the sheet metal of the case!

Beyond that, the system waits for a serial command once it's initialized. As Elf had mentioned, the only options are either to enter the PROM or to attempt to netboot off of an as-yet unknown device.

Unfortunately, my particular Indy has an issue when connecting to it over serial, which leads to some rather... interesting behaviors, in the PROM.


Code:
So, it's a bit of a mess, and makes it impossible for me to easily dump my particular system's ROM at this time. It's only an issue with serial transmission and loopback: the system itself does seem to receive serial inputs perfectly well. Strange stuff.

I haven't yet tried to install the Bambi board in a system running IRIX yet, though I have doubts as to how much of it will function without drivers and/or the custom boot ROM.

To end off, here's a link to all of the pictures I've taken of the machine, as well as some other prototypes from Elf's personal collection. Happy hunting!
Reactions: Elf