Finally I can found and Indigo2 teal, but ...

To make more progress, I'd suggest (assuming you have a desoldering gun) to remove the main transformer. Then check the transformer out of circuit (to verify all the windings!) , then with the hole that provides, you can access both sides of the PSU while they are exposed. This will give you better physical access and also remove the inductor at the end of circuit you're trying to isolate/check.

weblacky said:
To make more progress, I'd suggest (assuming you have a desoldering gun) to remove the main transformer. Then check the transformer out of circuit (to verify all the windings!) , then with the hole that provides, you can access both sides of the PSU while they are exposed. This will give you better physical access and also remove the inductor at the end of circuit you're trying to isolate/check.
Click to expand...

Quick update: I've been trying to familiarize myself with the board, looking for shorts, and tracing the circuit. So far nothing stands out as obviously shorted.

There are a few things that surprised me though:
The rectification seems to happen before the transformer lowers the voltage. Does that make any sense? I'm only familiar with much less sophisticated power supplies that first lower the AC voltage and then rectify it. This is my initial tracing of the circuit. 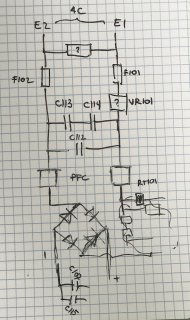 There's that nebulous area to the right that I haven't fully traced and it even corresponds to some of those cables that go to the other board (which I don't even know what they do there, since it goes into that coil-looking device with the red cylinder on top--any idea what that is?) 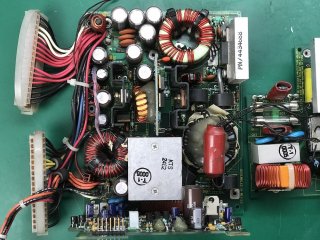 The part that makes sense is that the big capacitors (and the one that blew up C115) seem to be after the rectification, but before lowering the voltage, so that explains their ratings. 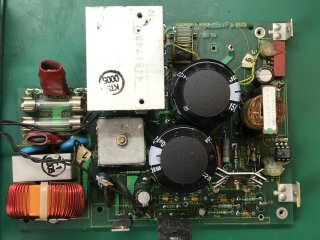 But also, if that's the transformer, its output goes straight into that connector on the top right, which goes to another panel. A transformer only works on AC, so that must be getting the signal before it was getting rectified.

It's frustrating not being able to turn it on and follow the signals along! I don't imagine it would be a good idea to try powering it on (even with a current-limited source) without connecting it to the rest of the PSU, right?

Anyway, I'm out of time for this week, so I'll have to pick this up next week. Thanks again for all the help and insights!

Just as an FYI, rectification always occurs before the transformer, and while you’re kind of right about Transformers working with AC only, that’s not true in this case.

You’re confusing step-down transformers in the local AC power grid for being the only thing going.

Under normal circumstances, if you plugged a transformer into a battery it would quickly saturate, then heat up, then burn out....unless you turned it off and on a bunch of times, then it that’s different.

See the way an SMPS works is actually not conceptual hard to envision (discounting different techniques to achieve each step). I’ll describe a very basic SMPS to help you visualize the major workflow steps, this is by no means complete, it’s not conclusive, it’s the basic steps in order to go from AC to DC using high speed oscillation and a transformer. That’s all an SMPS is, a high speed, self tuning, oscillator.

AC goes into filters to protect again line pollution (back flow of PSU noise into outlet). Then gets rectified and possibly doubled, so it now goes from zero to higher than line voltage (but it never crosses zero anymore, just humps on a graph instead sinusoidal), so technically it is really crappy DC. The crappy DC goes through the huge filter caps so they charge and discharge in the same cycle and after startup they now provide a lot of the filled in or missing voltage between these DC humps. Pfc occurs somewhere afterwards (I won’t get into it), afterwards you have much less crappy DC that goes into the MOSFET source leg. When a management chip (runs off a resistor diode circuit that makes a small crappy and inefficient DC on its own just to run the management chip until the PSU IS ACTUALLY RUNNING, then it runs off PSU-made DC power) tells the MOSFET gate when to fire.

The MOSFET(S) firing literally take the place of a variable resistance (that something like an old linear PSU would use). MOSFET firing varies in speed. So the very fast on/off switching looks like a perfect variable resistance before the transformer.

The transformer is literally having its main winding disconnected and reconnected (by MOSFET source to drain). When connected the transformer quickly saturates and produces an electromagnetic field, when the MOSFET(s) switches off the power stops and Transformer’s electromagnetic field collapses, producing a larger inverse voltage spike and inductively energizing the secondary windings. The speed or duration of MOSFET on and off create like a Morse code of DC. The rates of MOSFET switching (as dictated by the management IC) is based normally on some kind of feedback circuit reading the final output voltage at the end of all this. As voltage drops the rate of ON increases in switching, as the voltage rises too high the rate of ON slows down (more OFFs than ONs). This basically follows ohm’s law.

This is why you can use the transformer with DC, it’s the on and the off causing rapid field expansion and collapse to inductively power several secondary windings on the low voltage side of the PSU. The final critical steps are that once the transformer’s secondary windings have energized in the collapse of each winding or series of windings they are always tied to an output voltage rail (for lack of a better term). The first item in that rail is a fast recovery diode (each rail has it’s own diode) that block the energizing flow of current from the secondary windings in one direction but allow the flow on reverse voltage when the field collapses.

You get rapid on/off DC from a working secondary diode that the output filter caps help smooth out (possibly a few coils too) that then comes out the pins on the connector as your stable DC.

Each voltage rail is basically a pre-calculated secondary winding size connected to fast recovery diode to caps and coils to wires to PSU plug. Yeah, there’s a bunch of optional circuits that run voltage dividers and logic semiconductors and PSU signals and more that I didn’t cover.

But they are more PSU features, protection, monitors, feedbacks, etc

But aside from supporting logic it’s really that simple. However in SGIs a lot of that logic is done by passive components (resistors networks and such). That predate simple discrete logic ICs on the market.

So if these things are out of spec, then the logic that makes PSU decisions won’t run right (hassle). That’s why checking resistor values is so critical on PSUs.

A large-value resistor on the HV side drifts off and the PSU will never startup! Same on the LV side. Voltage monitors that are wrong due to bad resistors make bad decisions to shutdown the PSU, incorrectly.

Also if it wasn’t clear the high voltage side (HV) is everything from the AC to the primary transformer winding. The low voltage (LV) side is the transformer secondary windings all the way to the PSU output plug.

Both sides have different ground concepts and that’s why you differentiate. While running power don’t cross or mix up grounds, you’ll be injured. LV side has a normal body ground that you’d expect, HV ground is referenced from the negative leg of the filter cap, not the body ground!!!!

From those basics you can study more, but that’s all you need to see the basic path, isolate parts and check.

Research parts for replacement, learn how to attempt IC checks for protection diodes inside IC bodies. It’s not foolproof, but you may find damaged ICs without the need for more equipment that way.

Keep checking, I’ve not heard if you’ve checked the MOSFET(s) yet, so that would be my next major step.

I’m still of the opinion you have HV side problems, but of course you could have compounding LV side issues with it.


weblacky said:
Since you had a brand new cap just pop and smoke, I still think you have VERY high voltage on your voltage doubler.
Click to expand...

Also worth noting here an active power factor correction circuit is basically a (high voltage) boost converter, rather than just a voltage doubler per se. If its feedback loop was off somehow then that could lead to generation of higher voltages. It's so hard to tell at a distance and without measurements, though!


weblacky said:
So this could be the source of the higher voltage and the loss of the TVS diode (not failing open) exposes the filter caps to very high reverse voltage every time the MOSFET fired.
Click to expand...

It's true you would get an inductive spike but I think we'd need to see more of the topology to say whether it was across the capacitor; also the capacitor has the nice effect of having an extremely low impedance for the high frequency of those impulses, so the voltage may not sustain across it even if so.


llopis said:
But also, if that's the transformer, its output goes straight into that connector on the top right, which goes to another panel. A transformer only works on AC, so that must be getting the signal before it was getting rectified.
Click to expand...

Indeed, transformers only have effect with alternating current, but the incoming 60Hz AC is not the only AC around

As referenced in @weblacky's explanation, the basic operation of a switching power supply (as opposed to a linear power supply) is to take high voltage DC (the rectified product in the HV stage of the supply) and switch it at high frequency to increase or decrease the voltage, with a feedback loop to accommodate for load. That high frequency switched product is the AC that the transformer sees.

For reference, along with most computer power supplies, what you are looking at is a Forward Converter.

Also without having looked too much at the topology of that board (at least recently), I would suspect that small transformer may just be for powering the switching circuitry? I'd need to look further on my own to really say. The toroidal transformers strapped to the other board are, I believe, involved in handling the majority of the load.
You must log in or register to reply here.
Share:
Facebook Twitter Reddit Link
Top Bottom