I saw this reviewed earlier today for other PCs of the old era, and did not see a discussion yet.

It looks like it can be the cheaper solution than SCSI to SD, if you have the interest in checking it out.

Open Source, you can do by yourself, as a kit, or pre-assemble. 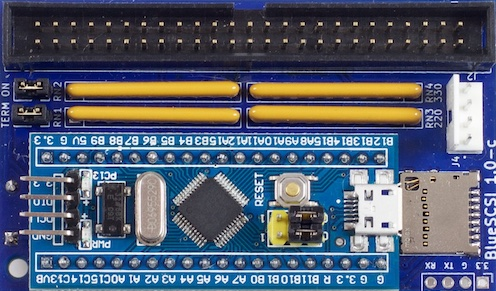 It should work, the downside is I'm seeing reports of <=- 1 MB/s transfer rates.
For comparison it looks like an Indy with SCSI2SD v6 can achieve 4.5 MB/s.
And a spinning SCSI drive of 300 GB at 10K RPM can go as high as 25 MB/s
Reference: https://forums.sgi.sh/index.php?threads/scsi2sd-v6-performance-report.110/
Reactions: Jinroh

I think speed is generally the caveat with the solutions that use a microcontroller (or full on CPU, like RaSCSI) to bit-bang SCSI using GPIO pins. While not necessarily technically elegant, they do result in a low cost solution in any case
Reactions: Jinroh

fwiw the bluescsi stock isn't a particularly ideal product. It's cost reduced to the point of kind of hampering performance and causing some weird compatibility issues - especially if it's not the only device on a chain.

A bit issue is there's no actual bus drivers on the board, instead running right off GPIO. This could explain some of the compatibility weirdness where it works on some machines and not others, or works on internal or not external and so on. Additionally, the STM32F103C8T6 can only go up to 25 mA per GPIO pin, and SCSI at its worst can do 24 mA for termination and similar tasks. The SCSI2SD guy is building a derivative product to address this issue by adding bus drivers and some other changes due to be released soon iirc.

The fact that they're almost all using microcontroller modules instead of soldering one to the board isn't ideal either. The SCSI2SD lost the DB25 unpopulated pads as they were acting as an antenna and causing SCSI issues. I can't imagine bus-driverless GPIO pins sticking up work any better than bare pads were.

The other thing is it's not meaningfully cheaper over alternatives like a SCSI2SD. A v5.2 (when they're in stock) is $62 assembled, while an assembled BlueSCSI will run you ~$50.

Now, the BlueSCSI does have some fun advantages with how it handles images. Being able to store disk images on an SD card vs partitioning a whole card is very useful. Especially if you want to emulate a CD drive (there's actually a project for this called Mac SD).
Reactions: Jinroh and Elf

Very good responses. I did not see any spec from the source, so glad to hear some analysis.

I didn't do any benchmarks so I have no hard data to offer, but I tried a BlueSCSI in an Indigo2 and it was perceptibly much slower than a 7200RPM UW SCSI hard drive (IBM ECE31708).

I do love the BlueSCSI and I'm fine with using it in a classic Mac that's going to be slow anyway, but it really holds back the SGI.
Reactions: Elf and Jinroh

Thanks for the info. Great to have some first hand test.

@ankylo5aurus Was there any trick to getting the BlueSCSI working? I created an empty image with dd, and my Indy recognizes it, but when I try to partition it I get the error "sc0,1,0: cmd=0x1a Unexpected info phase 36, state 49. Resetting SCSI bus" repeatedly.

pixel said:
@ankylo5aurus Was there any trick to getting the BlueSCSI working? I created an empty image with dd, and my Indy recognizes it, but when I try to partition it I get the error "sc0,1,0: cmd=0x1a Unexpected info phase 36, state 49. Resetting SCSI bus" repeatedly.
Click to expand...

I recall getting some console spam like that but it worked, and I didn't do anything special. I'm out of town for a while so I can't take a look at it right now, but will try to remember to check when i get back.

pixel said:
@ankylo5aurus Was there any trick to getting the BlueSCSI working? I created an empty image with dd, and my Indy recognizes it, but when I try to partition it I get the error "sc0,1,0: cmd=0x1a Unexpected info phase 36, state 49. Resetting SCSI bus" repeatedly.
Click to expand...

Based on the "diskperf stats" thread you recently started, was there any trick to get past this error? I get a similar error on my Indy using a BlueSCSI.
You must log in or register to reply here.
Share:
Facebook Twitter Reddit Link
Top Bottom