weblacky said:
Most likely you are running into the issue from forcing Single-Ended (SE) mode on a Low Voltage Differential (LVD) bus.

The SCSI architecture for the Fuel should be running at least Ultra160 LVD (if not more). These are Low Voltage Differential signalling buses. Now for many SCSI adapters (that also have interactive firmware, like Adaptec). You could FORCE an LVD bus back into the Parallel SE mode. This is what 50-pin (Narrow) and 68-pin (Wide/Ultra-Wide) are. You CANNOT mix the two, a SCSI chain runs at the slowest bus standard of all devices present on it. So if you put an LVD device and an SE device on the same chain...they both need to run as SE (good luck with that in practice).

However (regardless of SGI), I've seen embedded SCSI controllers for servers that were LVD-only and absolutely threw a fit when you tried ANY SE devices. They hated it, refused to do it, and generally were considered LVD only. I assume the last SGIs were configured this way.

The adapter you got IS SE. Because it has 50 pin, this isn't an issue with active termination of the 68->50 pins...you're attempting to downgrade the actual SCSI signaling standard to an obsolete one (in terms of the Fuel's perspective).

Please note the need for this kind of thing is RARE, the need to change a SCA drive to Ultra160/320 68 pin connector was just was never an expected thing. So I understand your issues, but while SCA drives are cheap, that's not what the Fuel takes (which is odd, considering the other SGIs DO take them). So be extremely careful not to mix SCSI standards. You won't blow up anything, but you're forcing the controller to a whole other signalling protocol...and even thought it should work, I'm not surprised it's throwing a fit. Many Ultra SCSI controllers were not really tested for SE and many either have intermittent problems or just outright refuse to work on an old SE device.

My advise, either buy a normal Ultra160 HDD (or get the right adapter, if you can) and then put in a AHA-2940UW card in the FUEL to run external and internal SE devices off that card. (since that's the correct standard for that adaptec card).

I've seen entire SCSI LVD array enclosures that worked ONLY on LVD and any SE devices caused firmware crashes. It's a thing.
Click to expand...

I'm going to try and reuse the adaptor in an Indigo, got it plugged into a 10K drive, and now the machine glows a glorious Green (hurray) but awaiting a monitor to see what's going on and or a serial cable to get to the next step in resurrecting an IRIS Indigo R4K.

Is it possible to connect a 300gb to the back of an o2. Like the one elf uses? I was going to use some kind of scsi 3 cable to a 68-80 adapter. What cable would I use and what adapter should I get. Im quite confused about what cable works on the back of an o2 i assume female to female scsi 3 of some type about 3ft long would work?

The O2 has a HD68 external SCSI-II connector on back; one could certainly attach an external SCSI enclosure containing one of the 15kRPM 300GB drives.

Elf said:
The O2 has a HD68 external SCSI-II connector on back; one could certainly attach an external SCSI enclosure containing one of the 15kRPM 300GB drives.

Any recommended enclosures or cables or websites where I can buy/ links?

Really this is just something you will have to go on eBay and find. There were many different manufacturers of these enclosures (and cables, terminators, etc.), and they are old enough that you aren't guaranteed to find one model or another. I would make sure you can visually identify the different types of SCSI connectors and understand what you want to connect and how, and then find what you need by looking around.

If you want a full solution already put together, it's possible one of the listed SGI resellers could do that.

There was some discussion today in the SGUG Discord chat about the heat that these drives may put off, and I do think it is a question worth investigating! If you have data points, please add them!

First off is a Challenge S with a stock Nidec power supply:

Code:
Note the uptime of the machine, to specify that it has been running for some time so as to come up to temperature. Air temperature is 73F.

Just after removing the case and adding black electrical tape for emissivity: 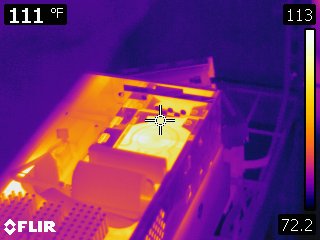 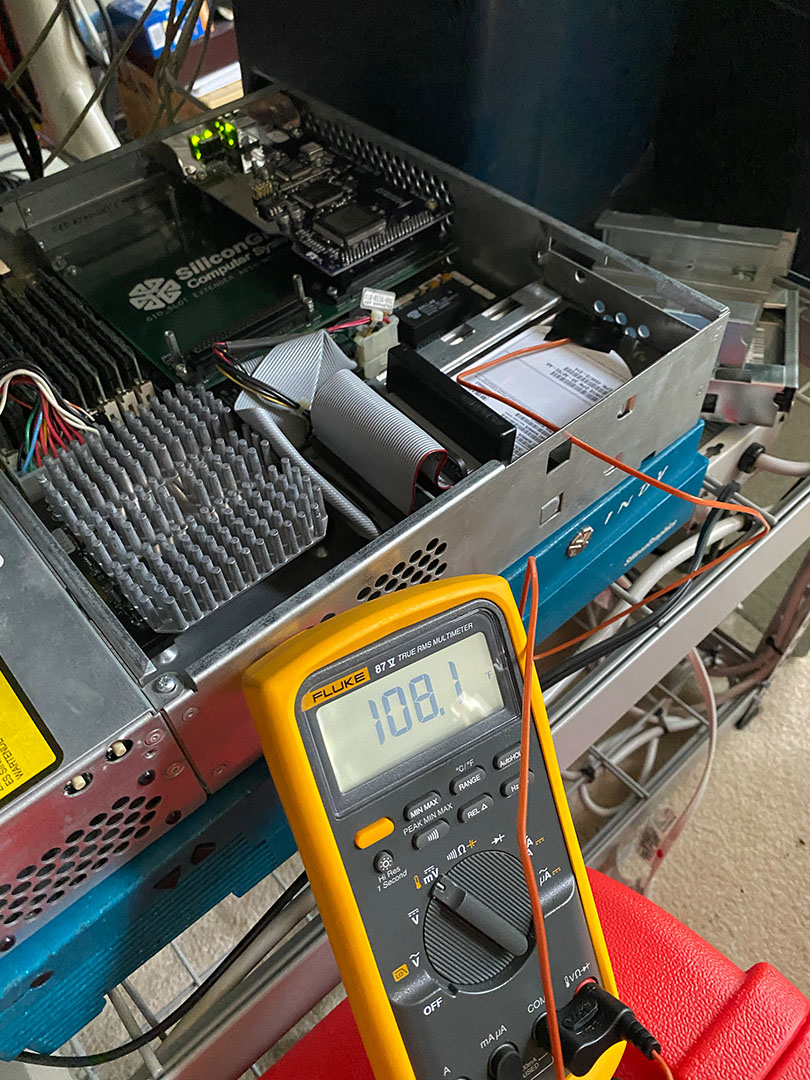 After putting a lid on it, the temperature dropped slightly despite the relatively tame airflow of the single fan in the Nidec supply and the hard drive being perhaps in the most disadvantaged location for cooling: 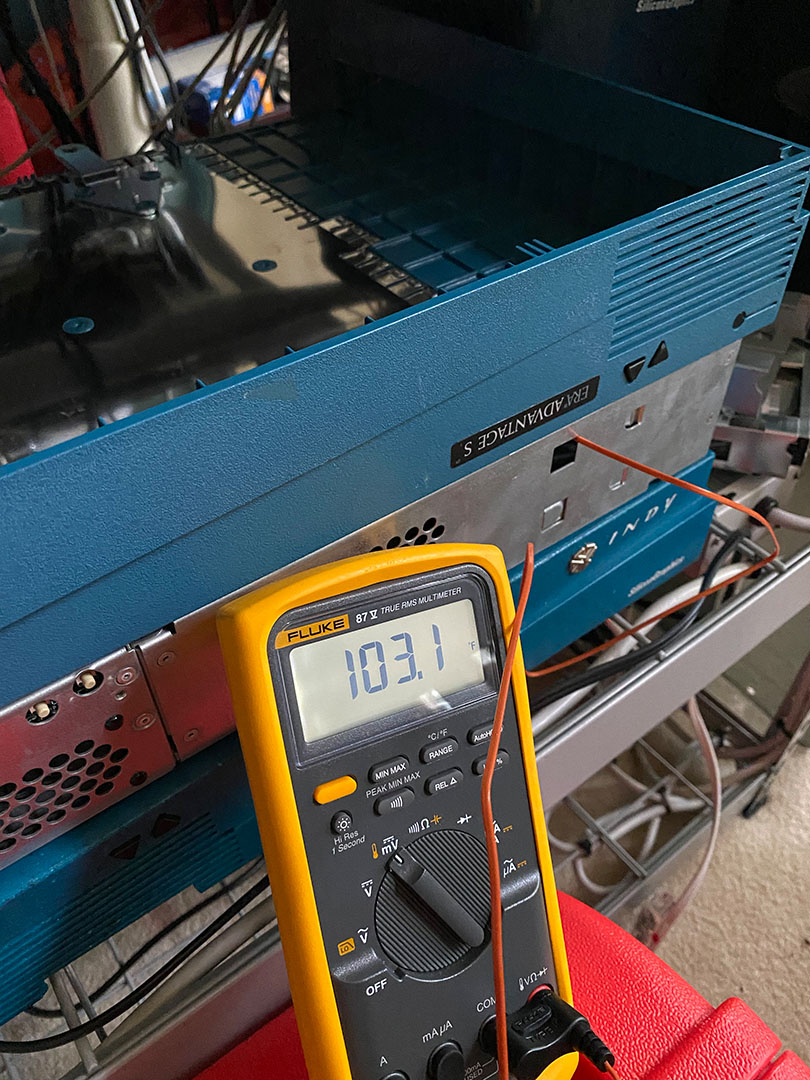 The drive is one of the 15k 300GB HPs as previously mentioned: 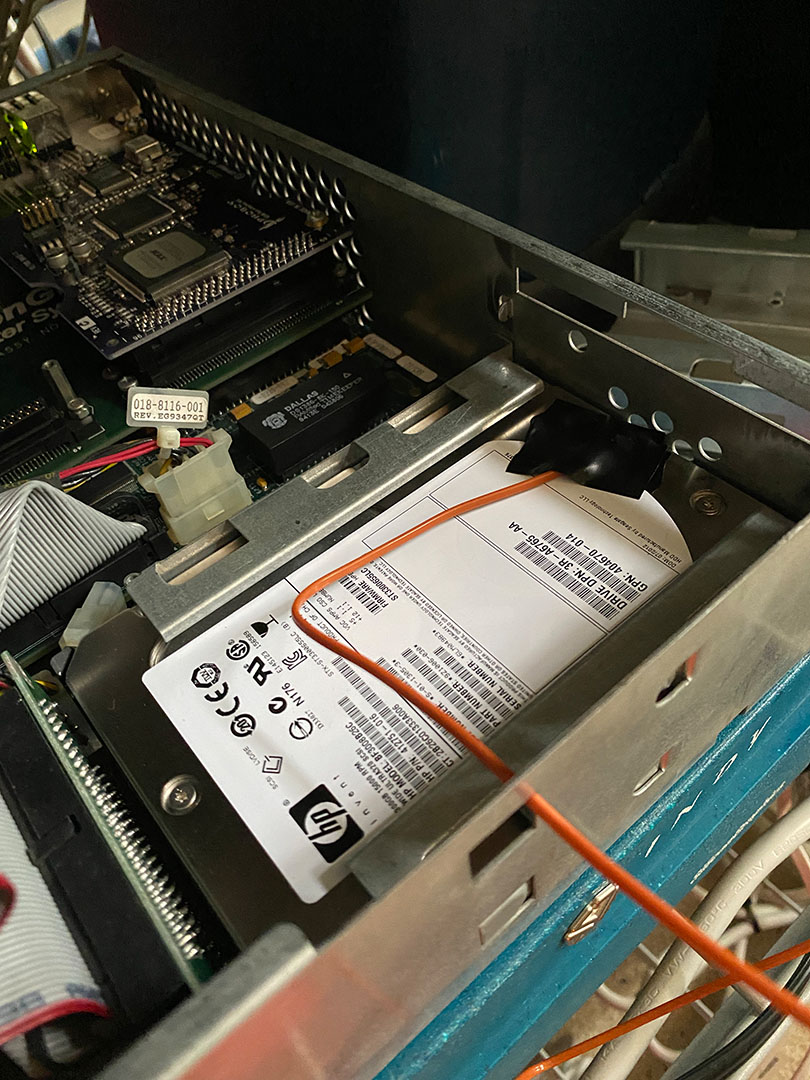 Also worth mentioning as brought up by @LarBob, from the disk manual:

Additionally noted in Discord, it is possible that scsicontrol may be able to yield the internal temperature of the drive, e.g.:

I won't go and fetch it but I remember Google doing a HDD study for a few years on HDD failure rates. While they had their favs and such, the conclusion was...dramatic increase in failure rates for drives continuously OVER 70F and for every 10F additional like a 50% chance of failure, increase.

Granted you need REALLY aggressive cooling to achieve 70F on these old drives...but once you're really too hot to hold in the hand...too hot (really). Now of course if you're just booting these for fun, occasionally, who cares. if you're actually going run them for 1 hour plus...then nope...get an SSD or a modem (slower) drive with high density to turn down the rotation speeds (or sleep aggressively).

I expect most people have an indoor air temperature above 70F so if that is the target then it doesn't matter how much air you are moving over them or how little heat the machine puts out
Last edited: Nov 27, 2021

Which is why I used the term "very aggressive cooling", because most people run 72F temps (I run 65F-68F) in their homes. Regardless, that was the statement and I already headed it off at the pass by qualifying it.

But I'll reiterate, 70F is considered perfect, but that's costly. But once it's uncomfortably hot to hold in your hand, that's bad territory.

Sure; if we are being pedantic, the manufacturer has already specified the acceptable temperature range of the drive for it to fall within their expected failure rate: 41-122F. That lines up with your statement of above 122F being uncomfortably hot to hold in your hand.

Some people were also curious about Indigo2 and I had a little bit of time.

Specifically this Indigo 2, with the same model drive and approximately the same 73F air temperature as with the Indy, having been powered on for about an hour for the temperatures to stabilize: 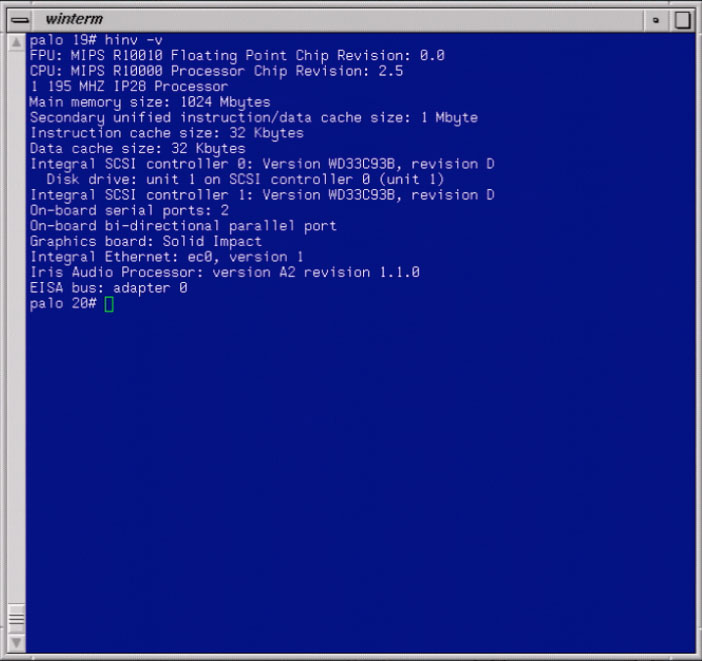 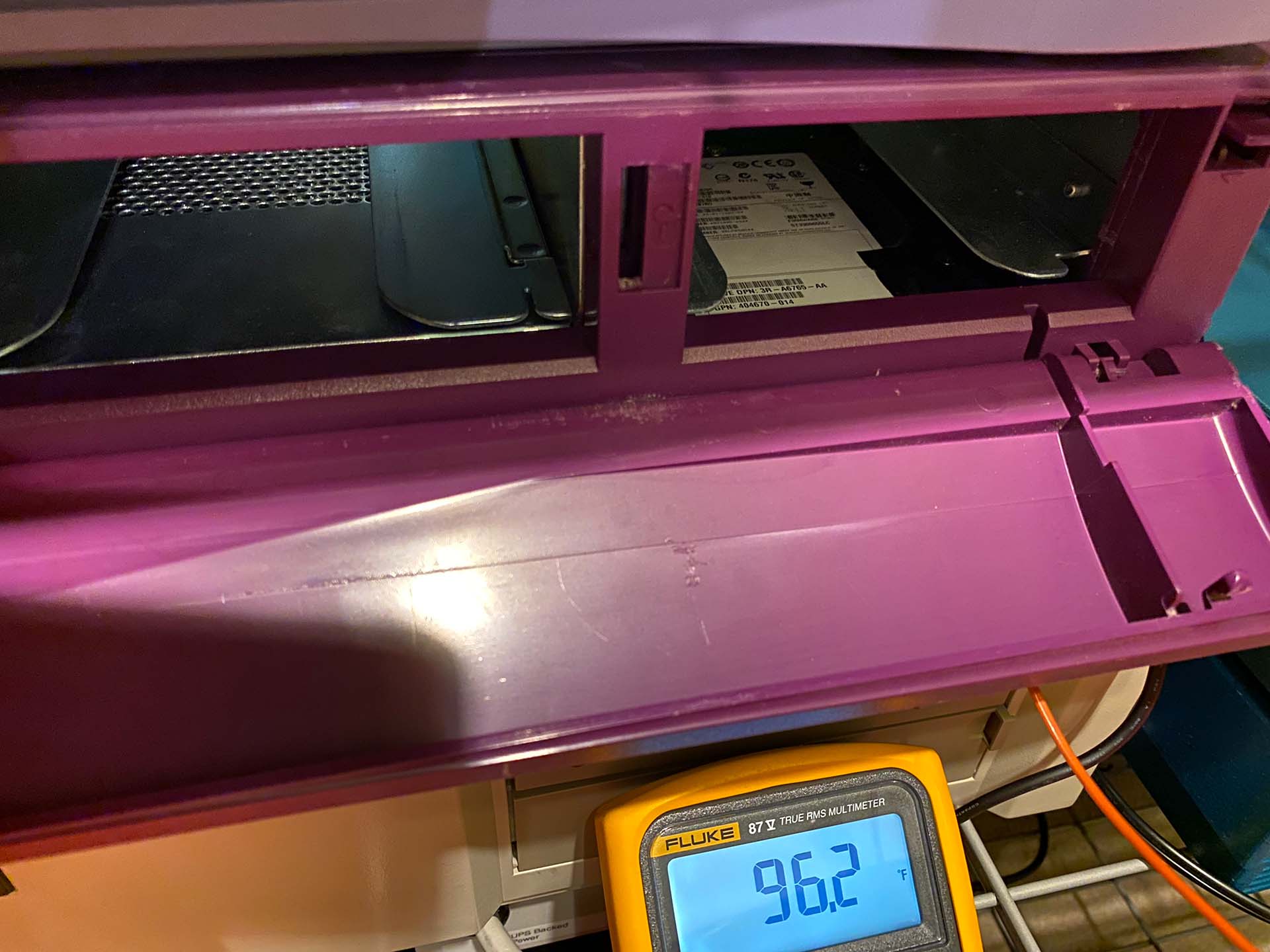 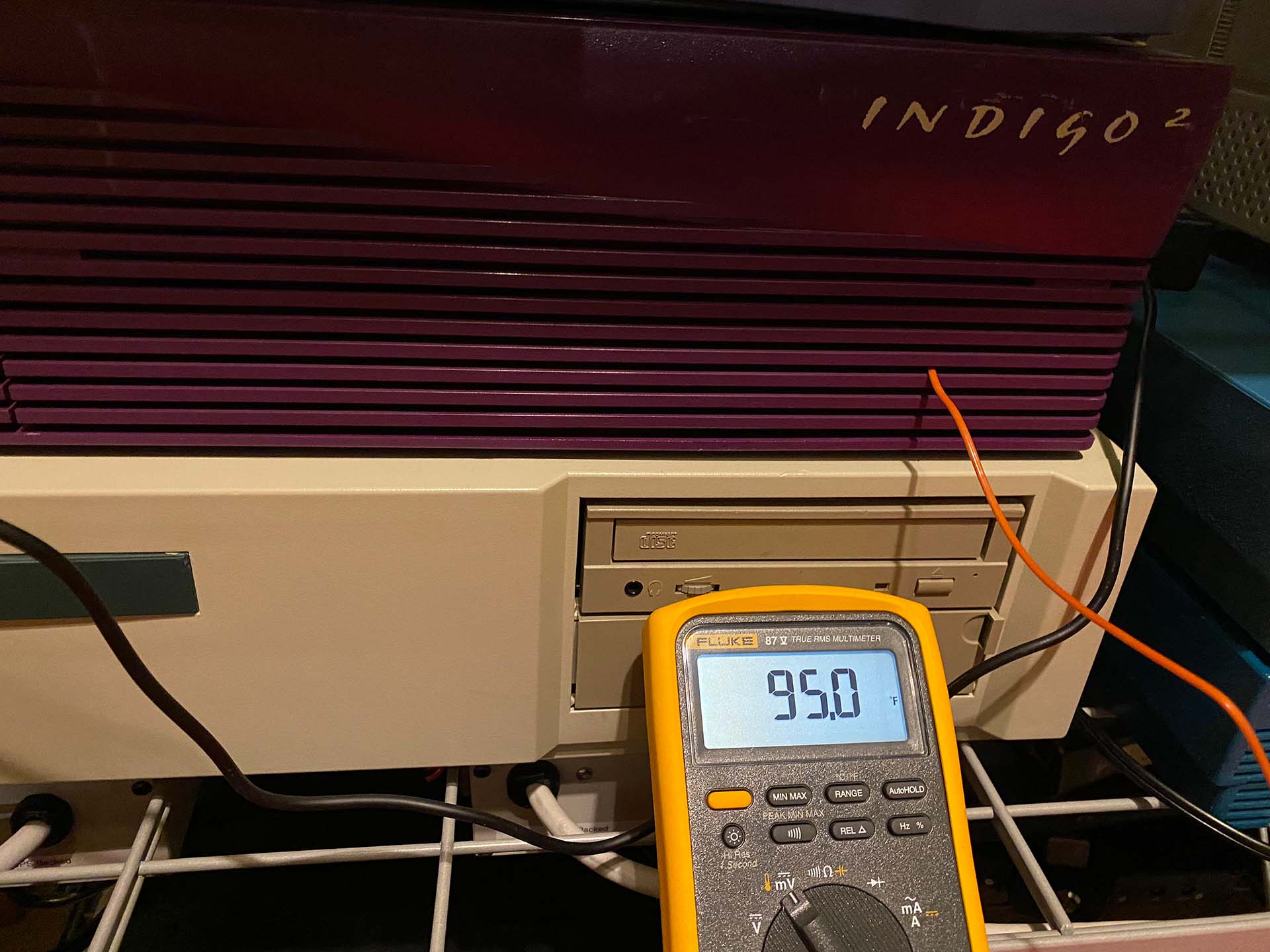 Overall a little bit cooler than the Indy, not too surprising since the machine has more air flow.

weblacky said:
get an SSD or a modem (slower) drive with high density to turn down the rotation speeds (or sleep aggressively).
Click to expand...

That's the core issue - we would all be using SSD's if there was a way to do it for under $2k for the SATA-to-SCSI adapter - but for just SCSI, the 300GB drives are the biggest and fastest we are gonna be able to use. For Indy or slower 5.3 (or below) systems SD2SCSI works fine - but the performance of the SD2SCSI takes a significant hit once we do Indigo2 running 6.5. The 10MB/sec (theoretical) cap of the SD2SCSI makes it not ideal for anything past Indigo2

Yeah, I do hear you, I've been collecting long enough that I have those things back when they were cheap, 11+ years ago. For my needs today on new systems I've picked up since then. I'd take Ian's advice and just get nice, cool running Fujitsu SCSI drives for your SCA80 needs (at least those really do run cool and are cheap on ebay).

Everyone is waiting for the next cheap(er) SCSI emulation thing. Personally I think we'll be waiting a VERY LONG time on SGIs as most people believe SCSI is for 80's PC and runs like 10-15 MiB/s while SGIs, SUNs, and some other UNIX workstations were so expensive back then they never entered the consumer market and the vast majority of SCSI emulation projects today are targeted to very slow, consumer, appliances. SGIs were supercars and you still need a supercar drive (of the right vintage) to let them cruise on the freeway.

The vast majority of my collection is still on mechanical drives. But I reserve the good stuff for the last stations (like Tezro), anything else I'd throw a fujitsu in and leave it. It's only worth an SSD on a Ultra160 or higher bus. A mechanical drive of the early 2000's can keep up with an 80MiB/s or slower bus without hiccup. The problem is that LOW DENSITY 10K-15K drives pour out the hot and cook. So the message was either find a solid state solution you like or get a larger (146GB-300GB) drive (which doesn't need to run so fast) given the density and head movement for the same throughput and use that.

People keep trying to use like 36GB 15K seagate drives...we're just reminding you to stop that on SGI stations...SGI servers...yes, sure they have the noise and airflow to cool those drive (rack mount SGIs are fine). Most SGI stations turned down the fans for user comfort...therefore stop using drives that require cooling by their own manual's instructions.

It's that simple, but since we all own our stuff, you can try whatever you want, we're just warning you as we've been there and seen that 20 years ago.

I know some PC users put fans and heatsinks on their HDD's - but they have room inside their towers. I was thinking about hacking an extra fan into some SGI's - I think it's doable, but I don't know if that extra effort makes sense or if just having a backup drive that gets mirrored every now and then is a better solution.

I end up running SCA drives in external boxes for most of my Sun systems, the Sun UniDisk box is pretty nice for this, though it can still have heat issues with very hot drives. Bonus, you get automatic narrow/wide termination. I haven't bought them in a long time as I have several, but they used to be cheap-ish.
Reactions: Elf
You must log in or register to reply here.
Share:
Facebook Twitter Reddit Link
Top Bottom