On the de-brittling of plastics

Most of the content of this post came from a deluge of messages I hammered out in the #hardware channel on the SGUG discord after deciding to do some digging on why the plastics on O2s are so exceedingly fragile, especially when compared to machines like the Octane. Aside from the case design itself being moronic (most of the casing has absolutely zero structural support bracing it against the inner metal chassis, it's like putting an anvil in a giant eggshell), I also found that the O2 uses a different plastic formulation than the Octane - the O2 is stamped 'ABS-FR' whereas the Octane is all 'ABS', bar the notoriously fragile door mechanism which is all stamped 'PC'. ABS, of course, stands for Acrylonitrile Butadiene Styrene, with PC standing for Poly-Carbonate. ABS-FR (the FR stands for 'flame retardant), it turns out, is a blend of ABS and PVC which (as per polymerplastics.com) "maintains most of the physical and mechanical properties of ABS". Given what other technical data I could find online wrt. hardness, tensile strength, elasticity, etc. it seems that ABS-FR is already more brittle than plain ABS even without accounting for aging, adding yet another force working against all our O2s. It's almost as if SGI wanted them to shatter!

After reading up on this, I decided to read further into plastic brittleness/deterioration and to organize a bunch of loose thoughts and machinations I've had in regards to restoring/preserving these plastic parts into a cohesive outline, which is where the wall of text from discord commences:

(DISCLAIMER: I AM NOT A CHEMIST OR POLYMER EXPERT! All information below is digested from what I could ascertain to be reliable sources, though none of this should be considered expert opinion.)

The mechanism of action for ABS yellowing is commonly understood - the Butadiene component oxidizes in contact with oxygen (duh), which serves to both alter the color and (somewhat) compromises the plastic's strength, however this only occurs in direct contact with Oxygen - anyone peeled a sticker off of a super-yellowed item to reveal a bright immaculate patch beneath has seen this firsthand. The oxidation process is accelerated photo-chemically with exposure to UV (and likely the other ionizing radiations) and potentially also in the presence of heat. Antioxidants can be incorporated into ABS during production in order to prevent or slow this process.

Retr0brighting reverses this reaction by using some chemical with an extra oxygen atom to spare - Hydrogen Peroxide and Ozone being the two most common - to liberate their own excess oxygen atom and those from the Butadiene to produce O2 gas, restoring the ABS's original color and (hypothetically) its original strength. Since the yellowing can only occur in direct contact with oxygen, clear-coating the ABS immediately following a retr0bright would likely prevent the return of yellowing. However, as mentioned prior, these processes are only skin-deep and cannot explain the general embrittlement of ABS.

ABS is generally supplemented with other additives, such as Tetrabromobisphenol A to improve flame retardation (this substance is where the oft-quoted "bromine theory" of yellowing originates - while it may contribute to some acceleration of yellowing, any additive can do this regardless of bromine content. And if the yellowing was from the bromine "leeching out", it'd wash off in water), and plasticizers in order to improve the, uh, plasticity.

Many plastic additives will slowly leech out and evaporate from their hosts over time, with this off-gassing accelerating in the presence of heat - "new car smell" is an example of this. The plastics of computer cases are, as we all know, no strangers to heat, and as heat can off-gassing of plasticizers, this process is likely the single largest culprit wrt. embrittled ABS. Hypothetically, re-introducing plasticizers to the ABS would reverse this process - at least for a time - and restore the original flexibility of the plastic. [Note: Ionizing radiation in general also serves to embrittle ABS and other plastics, likely by breaking polymer chains(?). source]

Despite what some people might say, there are known, proven methods for introducing plasticizers to polymers without remelting them. In typewriter repair circles, a common method for softening hardened rubber platens was to soak them in brake fluid for between fifteen minutes to an hour before washing thoroughly - at which point the rubbers would be noticeably softer and more pliable (poor souls who left their platens soaking for too long would discover them to be converted into goo.) ABS, too, has been shown to readily absorb plasticizers when solid, though I don't yet know exactly which. The main picture used in the Wikipedia article for 'Plasticizer' shows this, as plasticizers from a soft vinyl eraser slowly leeched into, softened, and dissolved a plastic pen cap the eraser was in direct contact with. Diffusion! 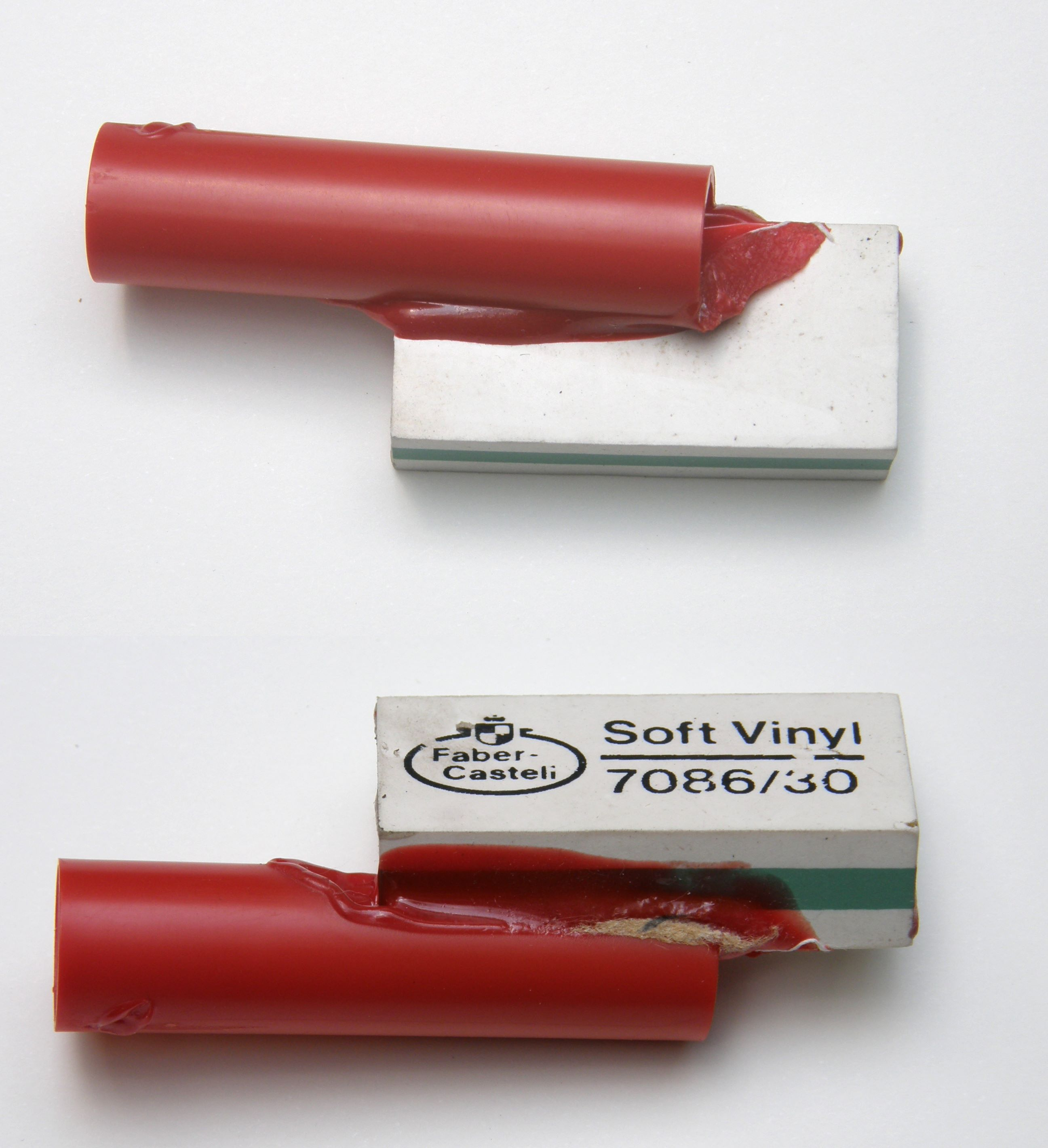 As Jupo noted on discord, this effect is also seen when old plastic electronics which have had their cables wrapped tightly around their cases for years appear to have "melt" marks where the cable was in contact - the extra plasticizers added to the cables to make them flexible slowly diffused into the plastic case, softening it enough that the pressure of the cable deformed the case - I'm sure that you would also find the portion of the cable that was in contact with the case to be less flexible than the rest.

From this, we can surmise that we could soak, coat, or treat ABS plastics with some plasticizing substance in order to de-brittle it. However, this is going to be a delicate process which will need to be worked out analytically - not all ABS formulations act the same and neither do all plasticizers. I would presume that, similar to retr0brighting, the de-brittling could be achieved by either submerging a plastic part in a solution containing the plasticizer or by applying the plasticizer as a creme to the plastic and allowing a certain period of time to pass before removing/rinsing the plastic. The amount, concentration, and time of exposure will be critical, lest we end up with plastics with compromised rigidity - nobody wants a runny O2 or a 'Floptane' (Well, maybe some do) - this will require either a lot of trial and error or the input of an actual chemist who knows what they hell they are doing and can perform accurate modelling.

There are some other quirks of ABS which also contribute to the fragility: as it is an amorphous solid, like glass, it is prone to develop micro-cracks with age and stress which will compromise the structural integrity of the plastic as they accrue, being exacerbated by general brittleness. ABS's status as an amorphous solid may also provide a clue on how to correct these micro-cracks: when glass develops cracks and fissures, it can be 'healed' by (very slowly) being brought up to a temperature in which it softens ever so slightly enough for the cracks to disappear as the glass welds to itself. This could potentially also be done for ABS, though it would require a method of slowly, evenly, and in a controlled manner, bringing the temperature of the plastics up to a point where they can re-weld to themselves to heal micro-cracks but not enough to compromise the entire structure of the plastic, lest it sag.

This may be achieved by submerging the part in question in either a bath of water with some rigid structure supporting it or by very carefully controlling the salinity of the water bath to give the ABS parts a buoyancy equal to their weight in order to prevent sagging, and then slowly raising the temperature of the bath using a Sous vide cooker to ensure even and controlled heating. The temperature at which ABS transitions from solid to rubbery is roughly 220F, only slightly higher than the boiling point of water, so a different fluid may be required. This process may also serve to relieve general stresses in the plastic, or to allow redistribution of remaining plasticizer to allow for more even flexibility (?).

What started all this speculation was a post on a car forum here, where a method for de-brittling Nylon by submerging it in boiling water was discussed by several people, including two who appeared to have some level of real expertise: a metallurgist, and someone else of chemical background. If their speculation on the redistribution of plasticizer contributing to partially restored flexibility is correct, then it would only be a temporary fix until more plasticizer off-gasses from the plastic and leaves the structure unevenly stressed again. The only way to restore the original flexibility of the plastic is to introduce more plasticizers - and hopefully a form which will linger in the plastic for longer than the originals.

This would bring the procedure of plastic restoration to three steps: de-yellowing (and clear-coating to prevent further oxidation), de-brittling with plasticizer, and de-stressing with the hot water bath. I don't know what order all of these should be done in, but for those of us hoping to preserve our machines for future generations, it would be wise to start testing/further research on this very soon - I know personally that any museums hosting vintage electronics (or anything made of plastic) would be eager for such methods.