It's time for more Power Supply Basics! This time of the Silicon Graphics / SGI O2. This one had less to figure out than the Indigo 2 and Indy.

If referencing or duplicating this information, I ask that you maintain a prominent link to this original forum post for further updates, as well as a credit by name.

At least of the time of this writing, you won't get any better power supply information than at the Silicon Graphics User Group!

Here is the power supply pinout from the O2 front plane perspective, looking from the back into the recessed cubby hole for the PSU:

Power is supplied over a 24 pin Molex Mini-Fit BMI connector. This is like the Mini-Fit Jr. commonly found on wire to board solutions, but has guide posts and no clip. A 24 pin Mini-Fit BMI "plug" (machine side) is pictured to the right, with the Mini-Fit Jr. to the left for pin number reference purposes.

The O2 front plane (which connects the motherboard, power supply, and other accessories) has the male pinned connector, while the O2 power supply has the female connector.

+3.3V standby (Aux) power is supplied when the PSU is connected to AC Line power, but has not yet been turned on. In contrast to the Indy and Indigo 2 PSUs, the O2 PSU does not turn itself on by default, and the Run line must be grounded to start.

Pin numbers are as per the mechanical drawing. Wire colors are internal to the power supply, as only the connector is exposed when fully assembled.

Unlike the Indy and Indigo 2 which have most of their capacity on the +5V rail, the O2 is primarily +3.3V driven, with more of its power on the oddly spec'd +3.43V rail. The 3.43V regulation was confirmed. Standby power comes from a separate converter, and is at 3.3V, versus the main power rail.

Power factors were in the 0.6 area; bad as usual! Standby power is about 4 Watts. No precise numbers this time around, although they could be reported if desired. 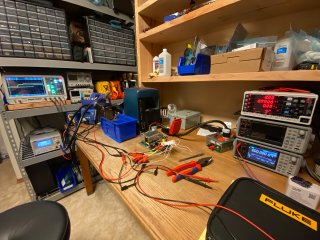 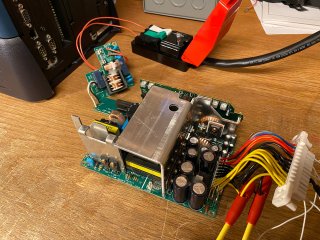 As you can see the O2 PSU underwent the usual test setup. Initially what gave me some trouble was the nature of the two sense lines. Without Pin 1 (red / small) and Pin 13 (grey / small) connected to the +3.43V rail and 0V return respectively, the power supply goes wildly out of regulation. The +3.43V rail will swing above 5V, and the power supply has a tendency to shut down under any load.

This made it difficult to test until I uncovered the nature of the sense lines by testing the O2 front plane. I am still uncertain why there is a feedback connection for the 0V return, but without this second sense line connected the PSU does not operate properly. 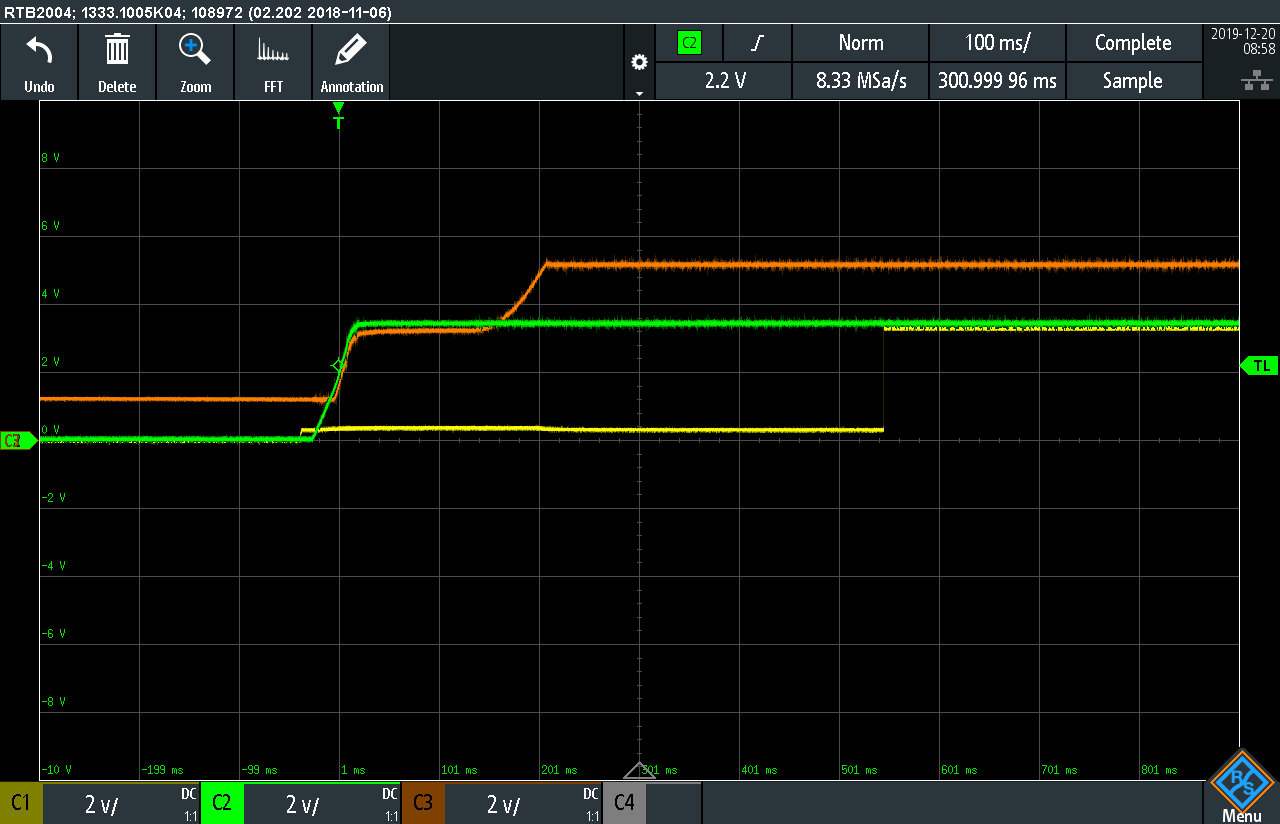 Pin 14 (power good) is asserted at a 3.3V logic level well after the +3.43V and +5.1V rails have stabilized. Notice the odd ramp up of the +5.1V rail, closely following the +3.43V rail until it gets a bit more of a boost about 150ms after +3.43V has stabilized. Strange! Examining the conversion stages would probably make more sense of this.
Last edited: Dec 22, 2019
Reactions: lalijiwo, Jacques and foetz

Also worth noting: while testing with the cover off and fan removed, my particular O2 power supply had capacitors that were starting to make bubbling noises. Given the age of these (and many other SGI power supplies), new capacitors may be in order for continued life.
Reactions: Jacques

Registered just to say thank you for the power supply diagnostics on the various machines! Probably one of the most important research matters to keep these old beasties going.
Reactions: Elf

I appreciate it, thank you!

Elf said:
I appreciate it, thank you!
Click to expand...

Quick question, while my O2 PSU is open for a fan replacement ( putting the original back), I noticed a potentiometer on the daughter board labeled 'Fmin'. Does this regulate the minimum fan voltage? I only ask as my fan spins much slower in the O2 while it's connected to a dedicated 12v supply outside the psu. 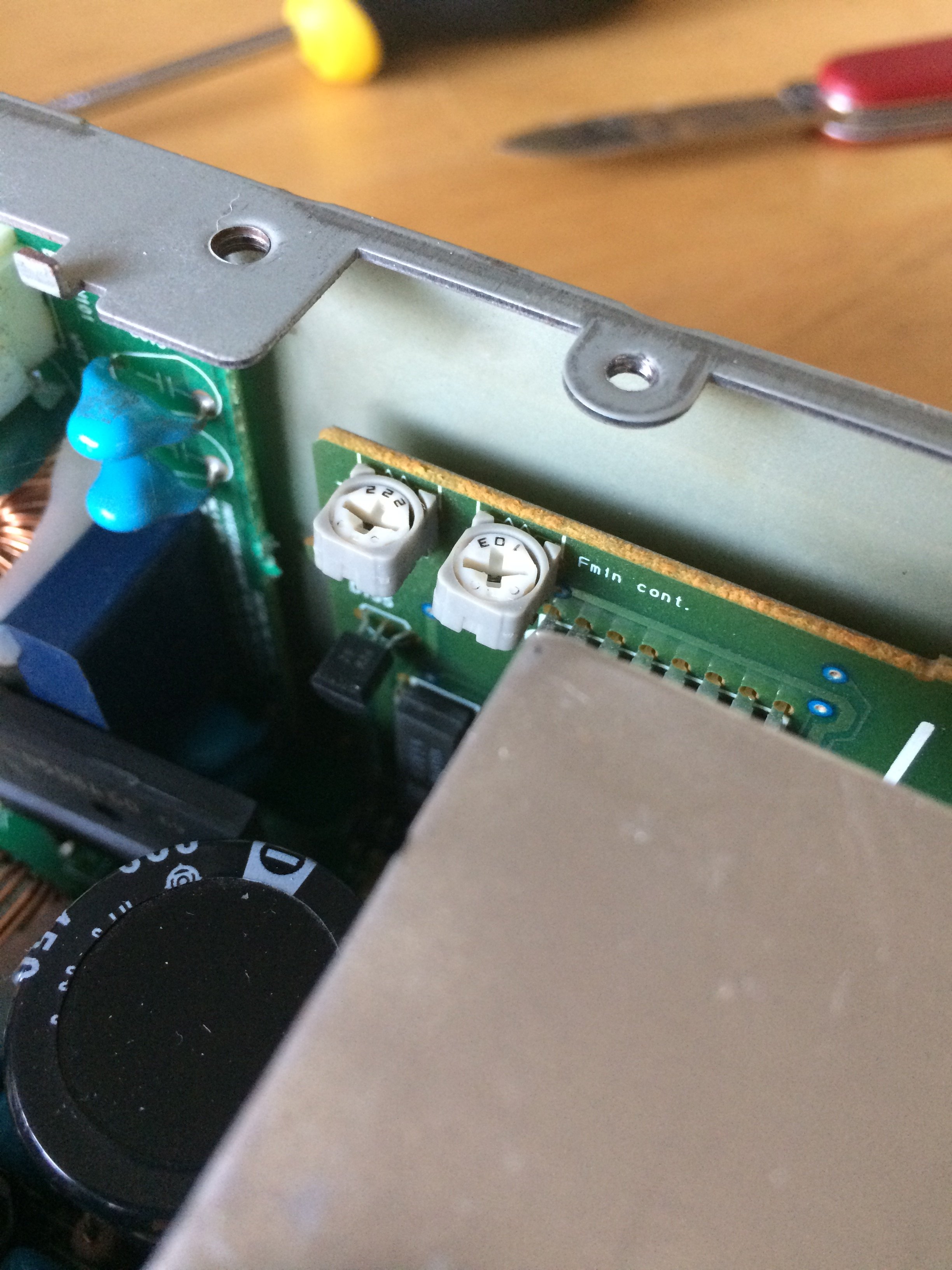 I apologize, I wish I could say! I did not try adjusting that or tracing it out. If you feel adventurous, you might mark its current position and try changing it?

The only other thing that occurs to me that "Fmin" could specify is perhaps switching frequency.

I'm curious if the machine will run if "only" 3.3V is supplied over that admittedly odd 3.43V line. And same with 5V over the 5.1V lines. Maybe at least on more limited systems? Would lead to a nice upgrade to a more modern PSU for these machines, assuming you can find one with suitable amps on the 3.3/5V lines. The Corsair RMx line of PSUs goes up to 25A on the 3.3V. But it seems crazy to replace a 170W PSU with something capable of 750W in the same of a slightly improved power factor...

My guess is that the 3.43 / 5.1V is used to compensate for a bit of voltage drop at higher current draw. The logic itself is almost certainly 3.3 and 5V. It might run if only supplying 3.3/5V at the connector, but you might be starving things a bit when there is a lot of draw on those rails. This could lead to instability, or it might just work!

Watch out on the ATX PSUs; with any relatively recent ones there is usually a maximum wattage between the 3.3 and 5V rails as they share a converter.

There is a post on one of the old Nekochan threads suggesting there *is* a POT for the fan speed in the O2 PSU, I will trace it out today and report.

If I wanted to start the psu out of the machine do I just short the run line with ground? This way I should be able to test the voltage across the fan header.

I didn't get round to tracing the POT, but I do know the fan header has 12V across the pins from power on. I was under the impression the O2 PSU had some way to regulate the voltage subject to temperature increase?

I took the opportunity to install a Cooler Master 80mm fan with 4.23mmH2O static pressure rating, it does very well keeping the innards cool. My original fan is now very noisy. The Cooler Master model is (was) often used on CPU coolers. The Arctic F8 has woeful static pressure, not really enough to draw heat out of a R10K/R12K case.
Reactions: Elf

Jacques said:
If I wanted to start the psu out of the machine do I just short the run line with ground? This way I should be able to test the voltage across the fan header.
Click to expand...

Ah, you will also want to connect the feedback lines (pins 1 and 13) to their respective rails before starting it by grounding pin 2.

Hello, Thanks for the info. was wondering if you repair or would consider repairing O2 supplies. I have two that let the smoke out,LOL.
I do not have the means to do the repair my self. if you do not any suggestions on a possible vendor that would perform the repairs?

Thanks for your consideration

Ouch! I apologize, but I unfortunately wouldn't have the time or even the experience repairing these. My ideas have mostly centered around replacing them, but it's also a really low priority project for me

Others may post some repair shops they have had success with? I have only heard of repairs happening a small handful of times though so it may take a while before you find someone with experience doing so.

You may want to reach out to @weblacky -- I think he's done some of these types of repairs and may be willing to do them as a service?

Yo, I plan to do O2 (I have two of them after all)..but I've not gotten to O2 PSUs yet. Still finishing Indy Nidec and Tezro PSU...then I need to move to Octane!. However I KNOW for a fact that Herb @ http://retrotechnology.com/herbs_stuff/mailto.html has several of them and will likely give you a very good price! Please contact him, I've purchased a few things from him before and plan on purchasing several dead PSUs from him for refurb. He's going to give you the best price around for a tested unit on short notice.

That should get you going for now. Hold on to your broken O2 PSU, I may do a call to buy them. I do have one extra O2 PSU but it's 13 years old, untested, and it's going to be the unit I inspect and rebuild first, so I don't have any O2 PSU to sell at this time. Hopefully in the future, once I've gone through all the station PSUs (or major ones) I'll have rebuilt inventory to sell consistently...it's still too early (apologizes, life happens and this doesn't really make any money as you cannot live off selling SGI PSUs).

Perfect! Thank you guys, I will followup with your recommendation. yes keep me posted on your PSU rebuild services when available.