Thanks! It would be really cool if the IRIS Indigo was indeed running everything!!!
Reactions: Elf

Today I transferred the component set that I built up in Maya 6.5 to Blender on my Mac, for assembly and final rendering. When you export a ".mb" file from Maya to a ".obj" file, which can be imported into Blender, you loose the textures that you assigned to the model, so in this case i'm going to have to setup all of the texture defining nodes for this model in Blender.

This image shows the imported model as well as the arrangement of nodes that I've setup in Blender to denoise the output of the Cycles render engine: 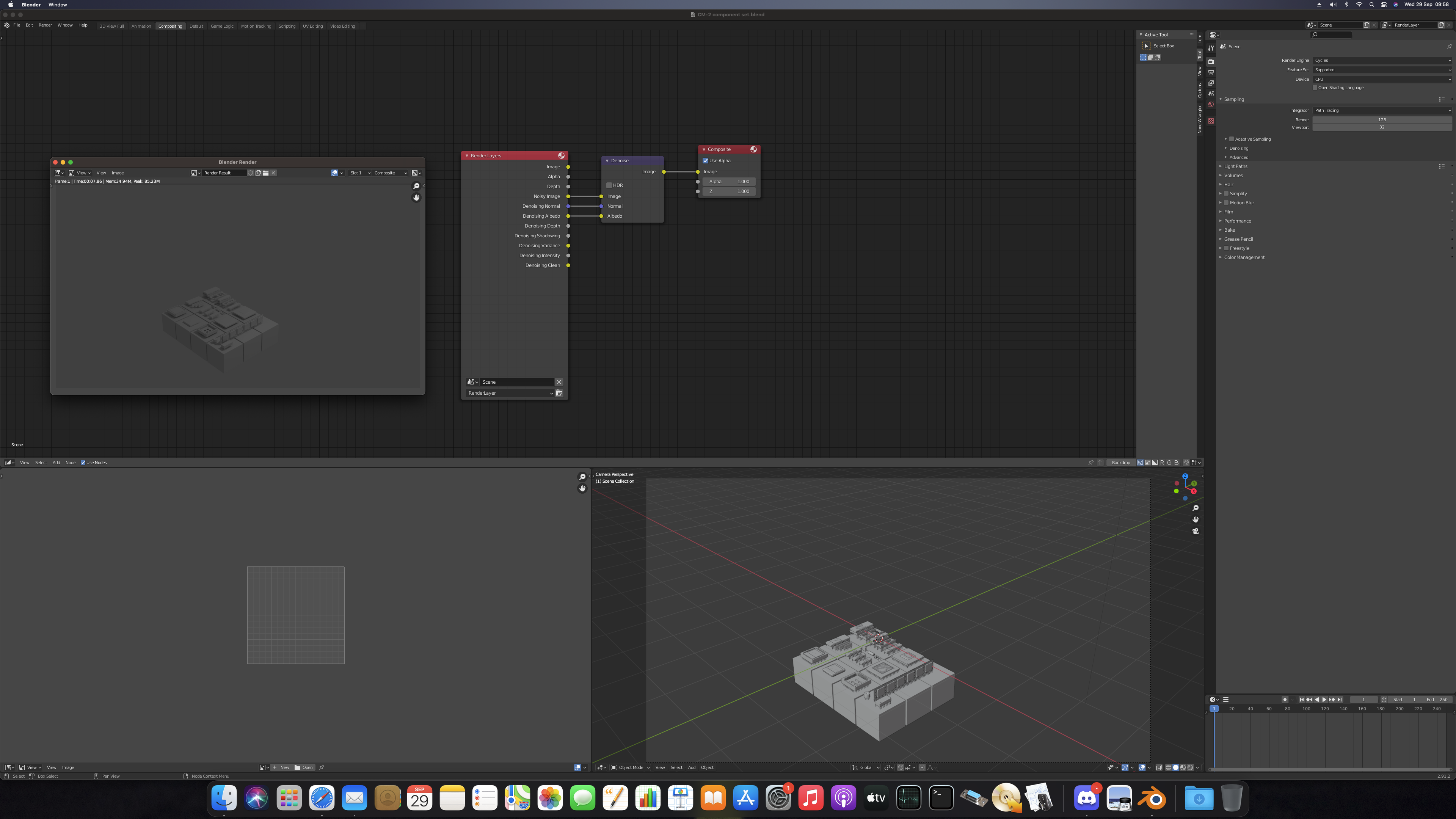 I've got most of the texture nodes sorted out! 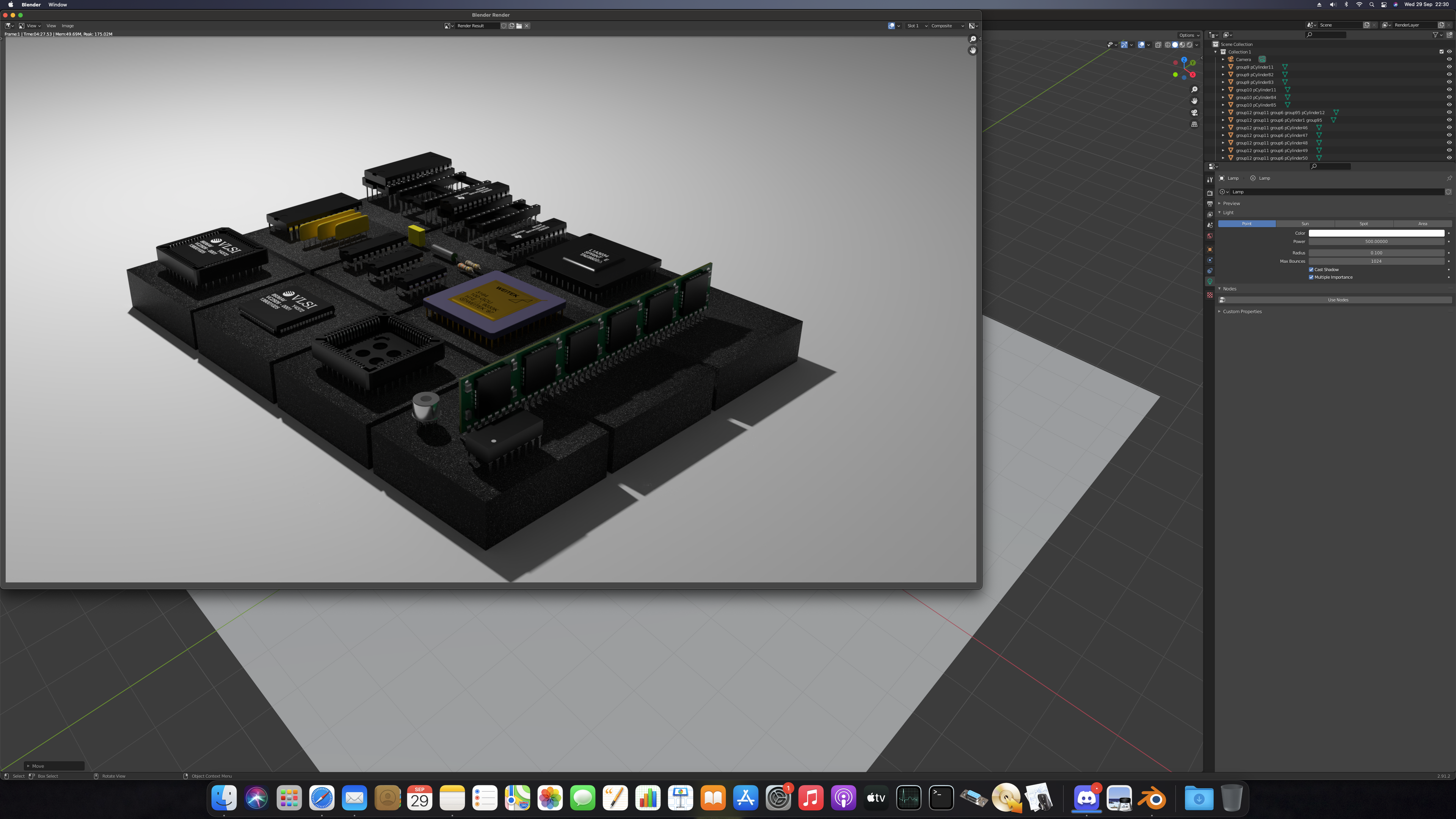 Soon I'll get to building up the compute node!

I think I'm definitely going to need a much more powerful computer!!! (This rendering brought my Mac to its knees, crashing it once the output was saved!) 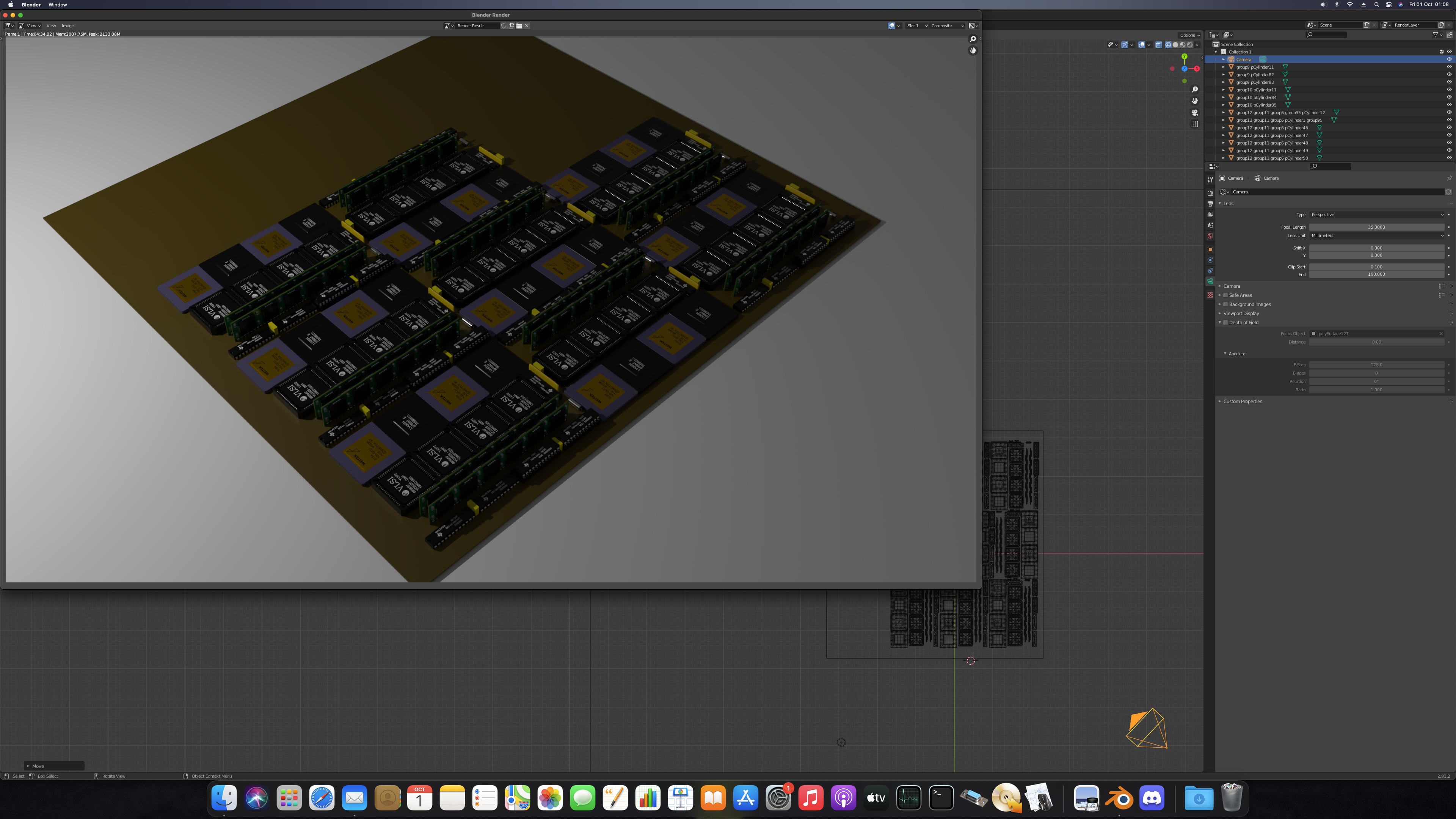 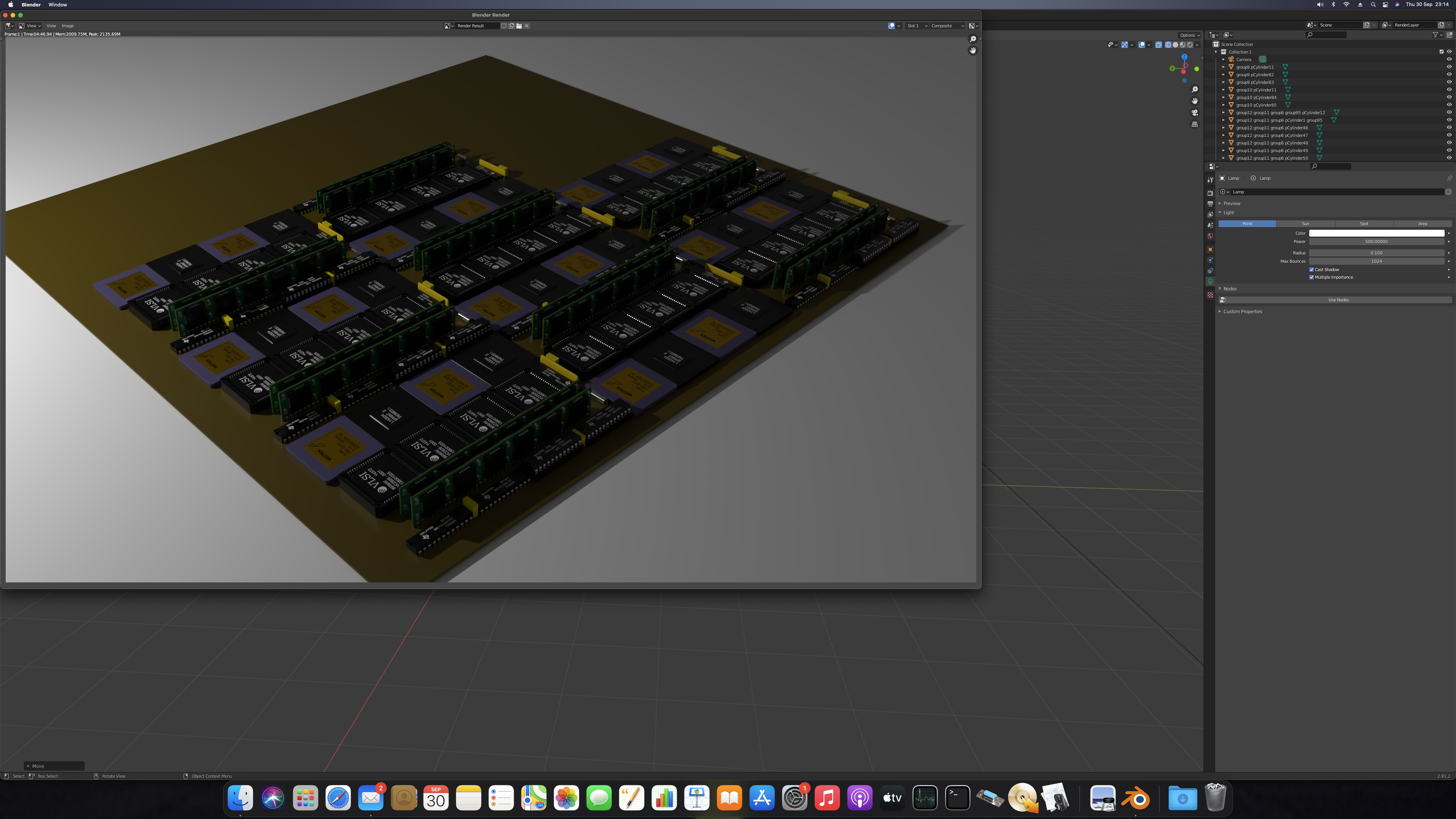 This is the initial phase of the node board building process!

This is the current size of the .blend file! 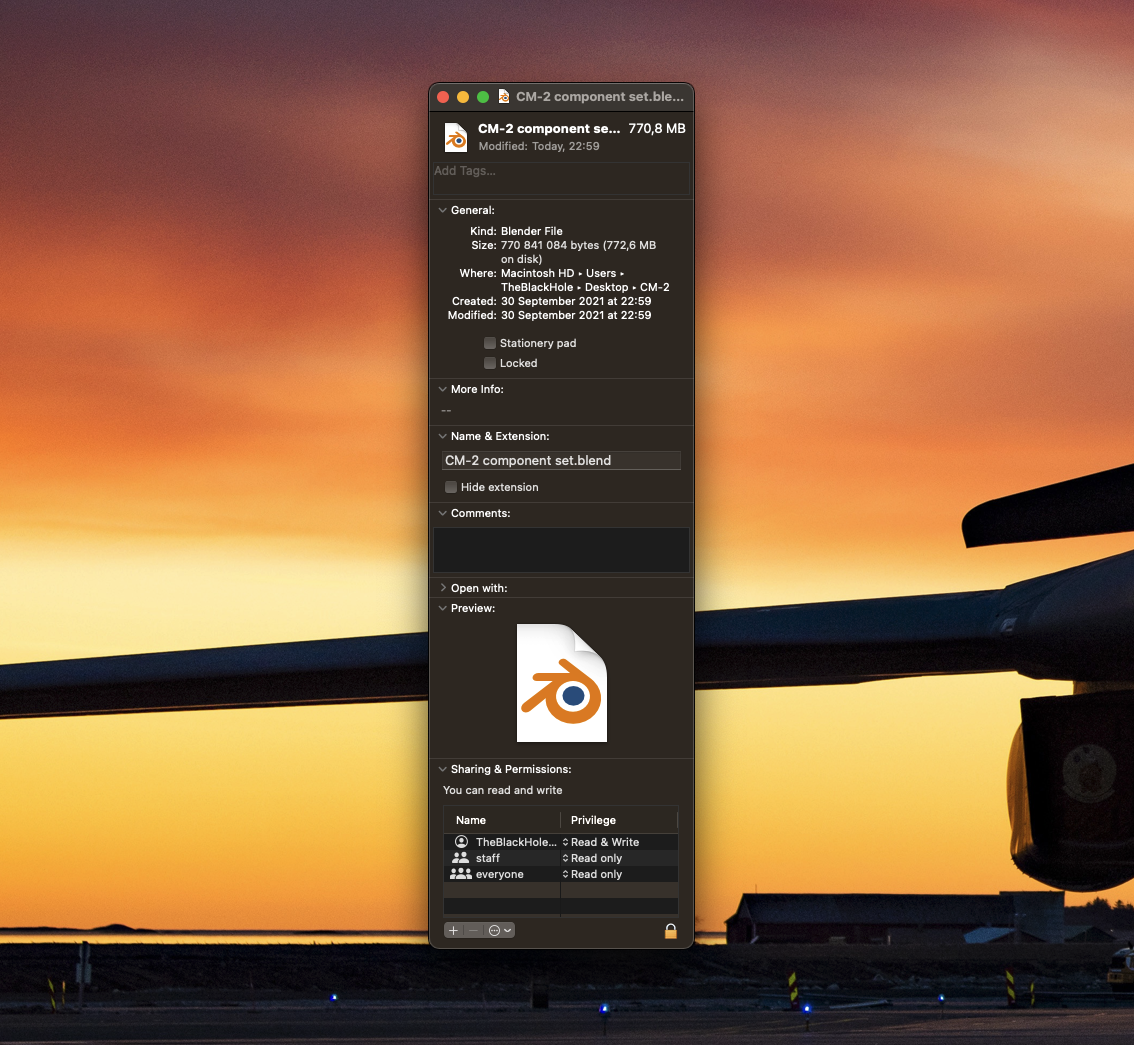 There was a problem with my model, that I was not aware of, being that every vertex in the scene was superimposed THREE TIMES, so today I spent many hours deleting the "overlays" and now the machine is performing perfectly! (Here's the latest progress, I'll definitely be able to build up a complete board now!!! ) 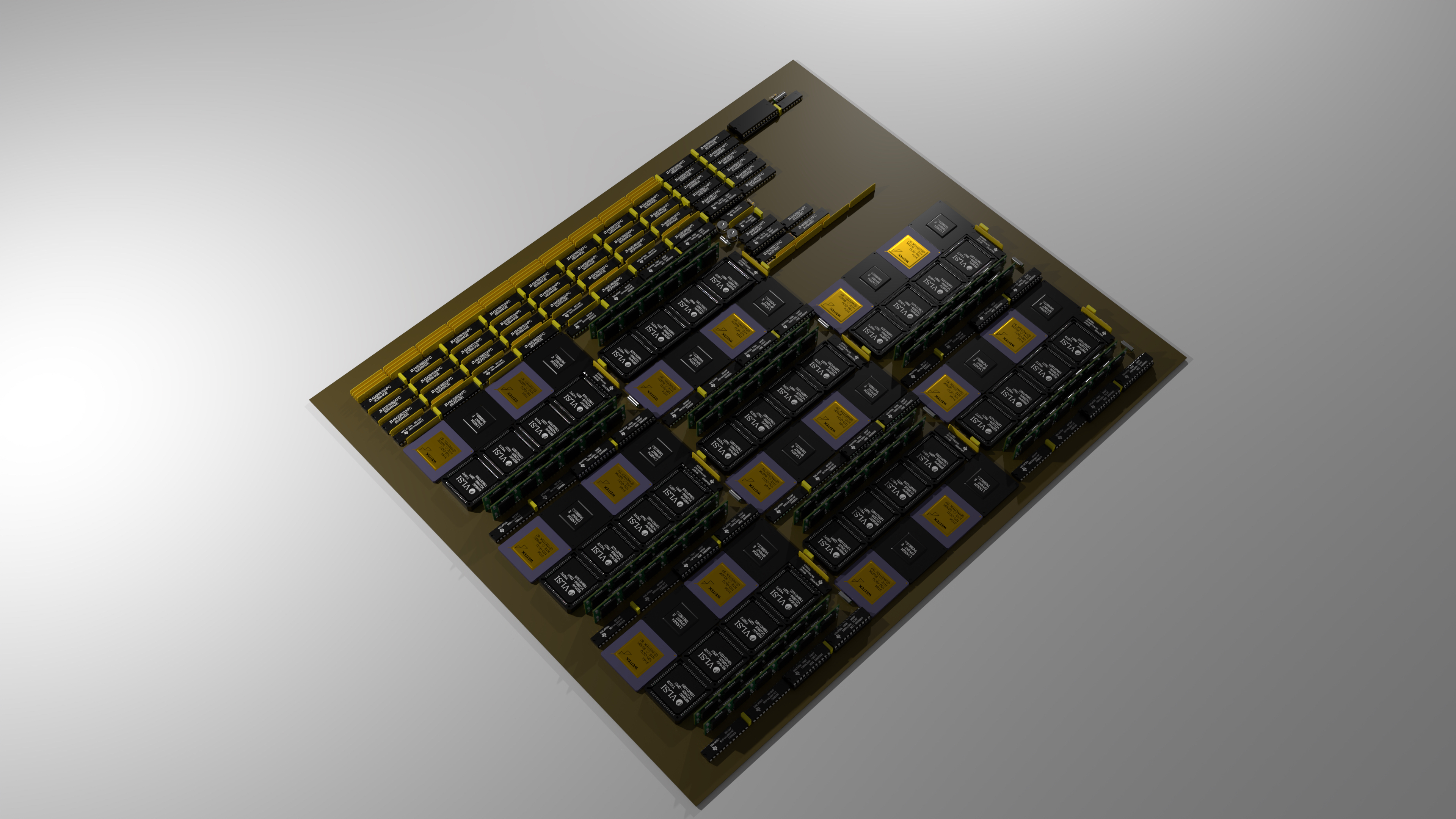 The components are now all at least on the board! Next come the "LED CPU status bar", the "securing gear" and the "bus interface connectors"! Finally I will add the required silkscreening to the board and try to sort out the labelling of the components to the top right of the board to the best of my ability, as I don't possess a high resolution image of that part of the board! 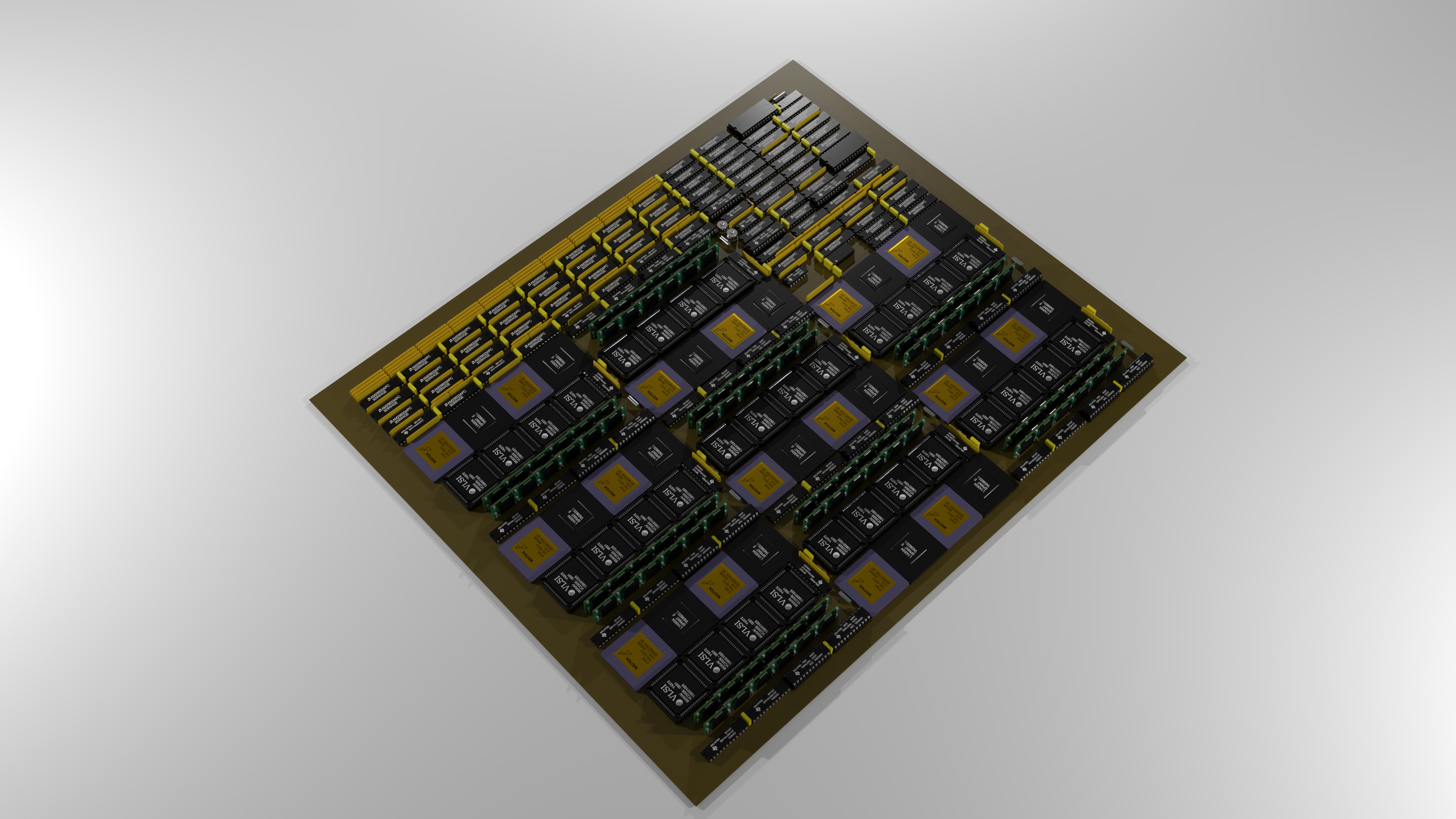 Here's the latest progress on this: (The machine itself is next!)

Here's how it currently appears in my viewport in Blender: 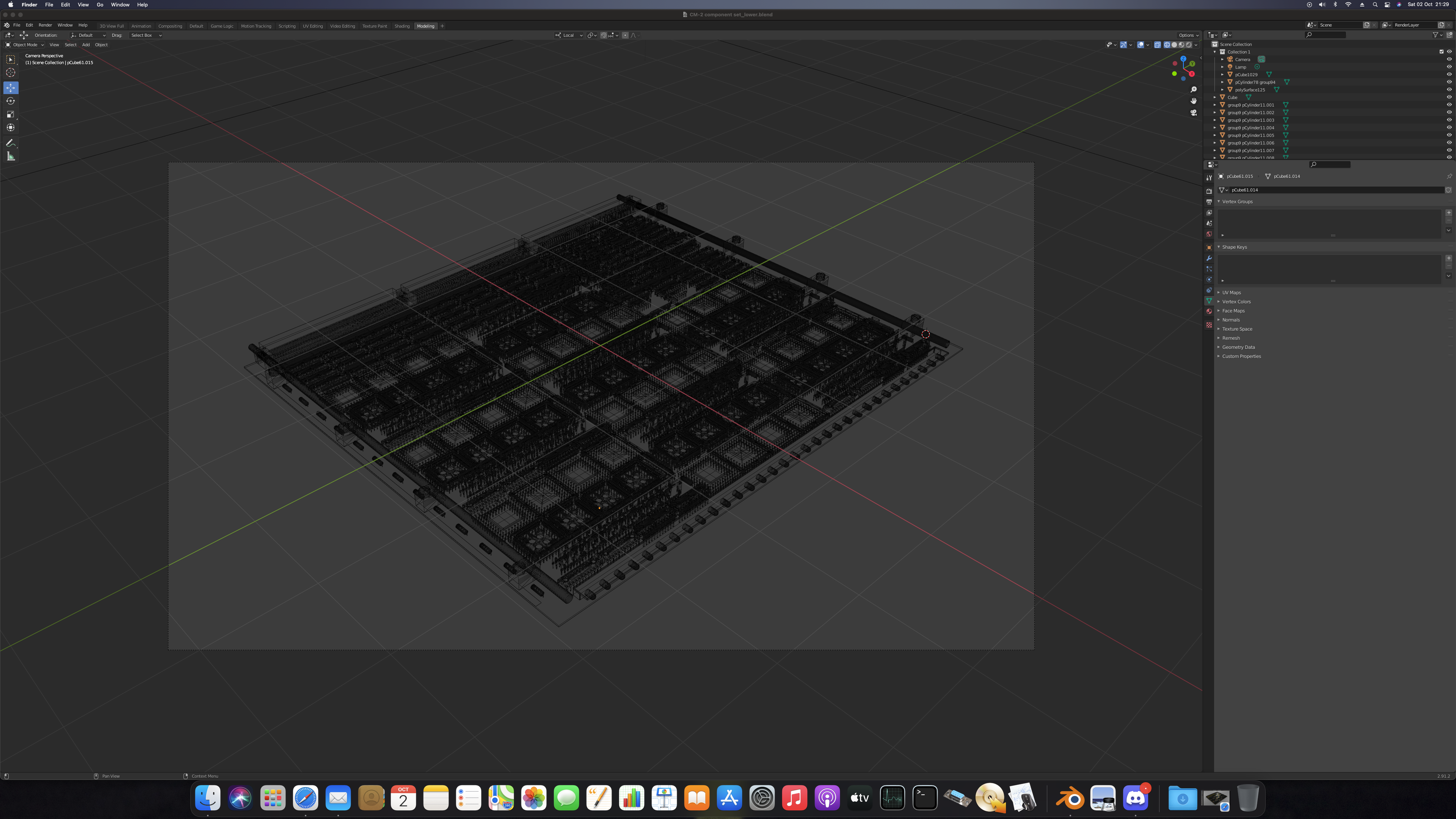 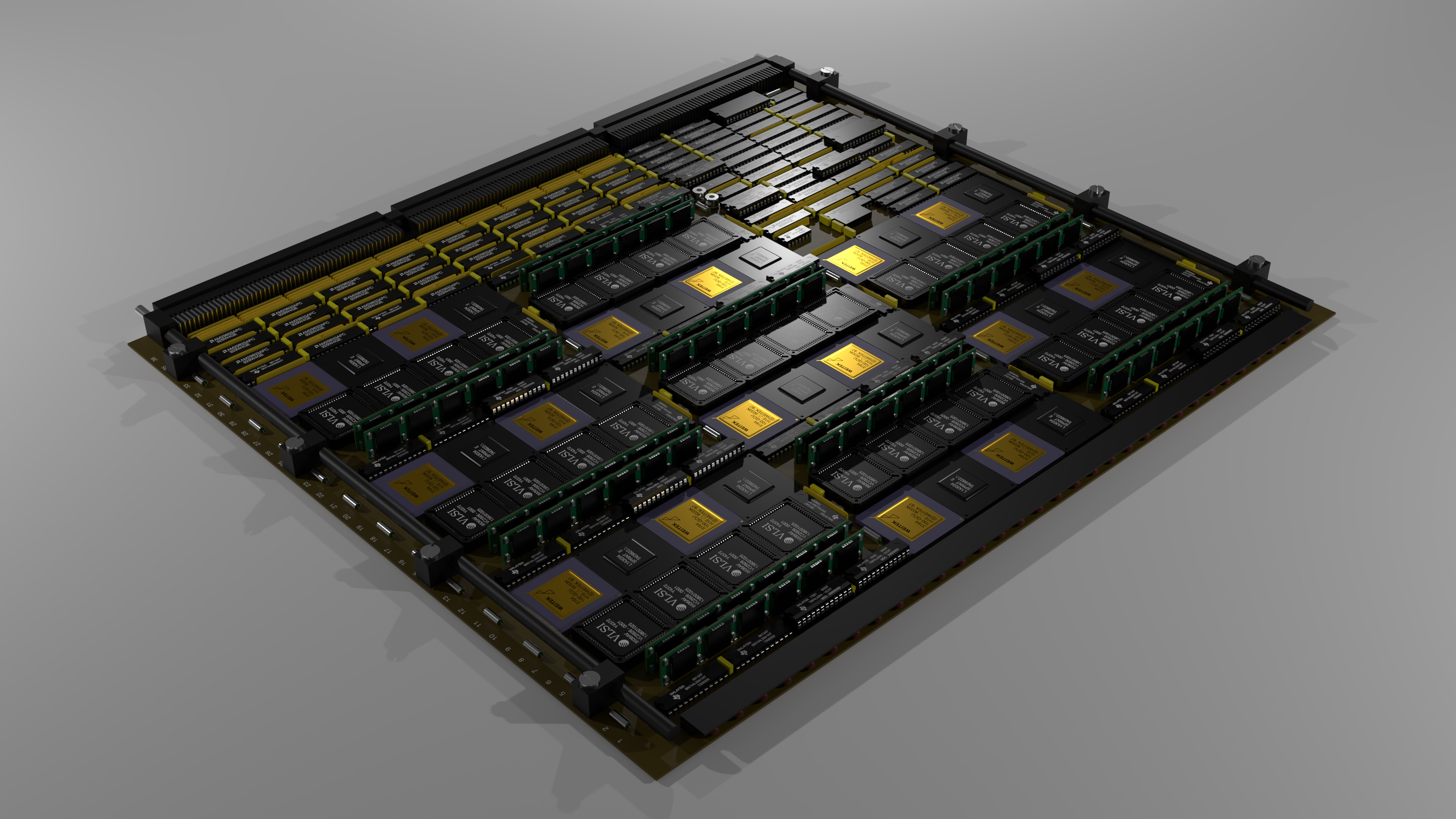 I was requested to do a video covering this build, is here it is:

I managed to do some more work on this today.

Adding the various holes present on the board as well as some more silkscreen. (I still have a long way to go on this module, but it is starting to take shape!) 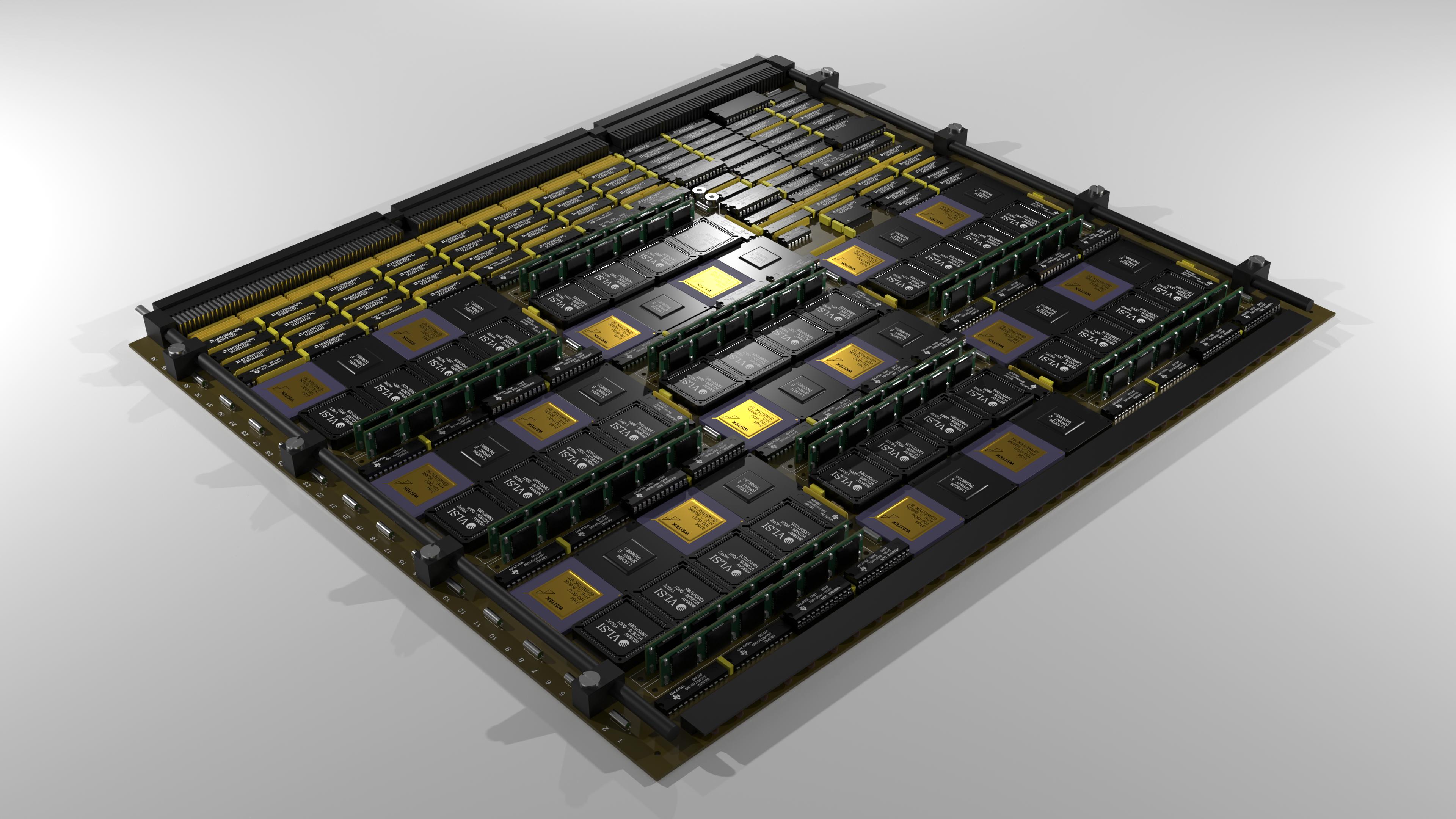 Irinikus said:
I managed to do some more work on this today.

Adding the various holes present on the board as well as some more silkscreen. (I still have a long way to go on this module, but it is starting to take shape!)

Joined the forum just for this thread. I'm not an SGI user; though I have considered getting a few older UNIX workstations up and running from time to time.

I too have a fondness for the CM-2 (and CM-5). As a way to hopefully inspire you to continue your work (if such is needed), I thought I'd share some of my work in recreating the CM-2 in a much different way.

I built a 32-node cluster of Nvidia Jetson Nanos, set it up with some LED panels, and built it out to be reminiscent of a small Connection Machine, something like the CM-2a.

All of the nodes run SBCL Common Lisp. I have ported the *Lisp simulator (https://www.cs.cmu.edu/afs/cs/project/ai-repository/ai/lang/lisp/impl/starlisp/0.html) to run on SBCL. The simulator is a serial-processing facility that let people debug their CM code on a workstation rather than tying up the real machine. I have gone through all of the simulator code and parallelized the loops allowing it to take advantage of multiple cores. I'm now working on instrumenting the code, and measuring where / what operations might benefit from GPU acceleration, and have also begun steps to reimplement all of the *Lisp public functions in a new package CMLisp which makes arrangements to allow the nodes to work together to provide a single large implementation of *Lisp parallelized and distributed across all nodes.

I have pulled a lot of the software off the Thinking Machines tape images out on bitsavers, and have recovered a bunch of *Lisp libraries that were available only on the CM, not in the sim (graphics and scientific libraries are the most important pieces I've recovered so far). I will be GPU accelerating the scientific library and implementing an SDL interface that is compatible with the CM graphics calls.

It's not quite accurate to say this is an emulator, yet, more of a reimplementation of Connection Machine *Lisp to work on a modern cluster.

When finished, I had been thinking of creating a GUI interface, showing a CM, with blinking lights (for users that choose to run *Lisp on a single computer, or don't want LED panels). It would be extraordinary to have complete renderings of the caliber you are producing for such a purpose.

I do plan to get back onto this job when winter comes over here. (It's far more comfortable to work when it's cooler!!!)

I look forward to your designs! Lets keep in touch!

mjg said:
I look forward to your designs! Lets keep in touch!
Click to expand...