I've received an Indy with a small 1GB disk and I am having trouble installing standard 6.5.22 selection due to insufficient space.

The disk had 6.5 on it by the previous owner, so I guess it must be possible to get a clean IRIX running on that small disk, even if there will be not much space left for additional apps.

what can I remove in the installer console to reduce size?

I unfortunately have no idea. I would invest the $50 on ebay and get a 300GB drive and adapter. Booterizer is setup to install everything and starting to remove certain pieces would be a nightmare.
Reactions: flexion

I was on the same boat with my Indy, same hard disk size and same IRIX version as I wanted to have the same version running in all my computers for consistency's sake. It is doable, and while this was done a while ago and I do not recall the specifics, it was a pain as most options on the UI were greyed out and were either missing or not running properly, and there was very little room to spare. Even the option to shutdown the machine was somehow not available and I had to power off by pressing the case button. Again, this was a good while ago and it may have been possible to install the OS in some other manner, but that was my experience anyways.

I second the recommendation above, get a bigger drive or use IRIX 5.3. I went the SCSI2SD v6 road and while a bit more expensive than the traditional way I am most happy with it. It also takes longer to boot but once the OS is loaded it is very responsive.

Edit: Picture of the SCSI2SD drive installed on the top drive caddy inside the Indy. I am hoping I can design a bracket which will allow me to access the SD card from outside and through the floptical slot to try different disk images. It is a bit messy for the time being. 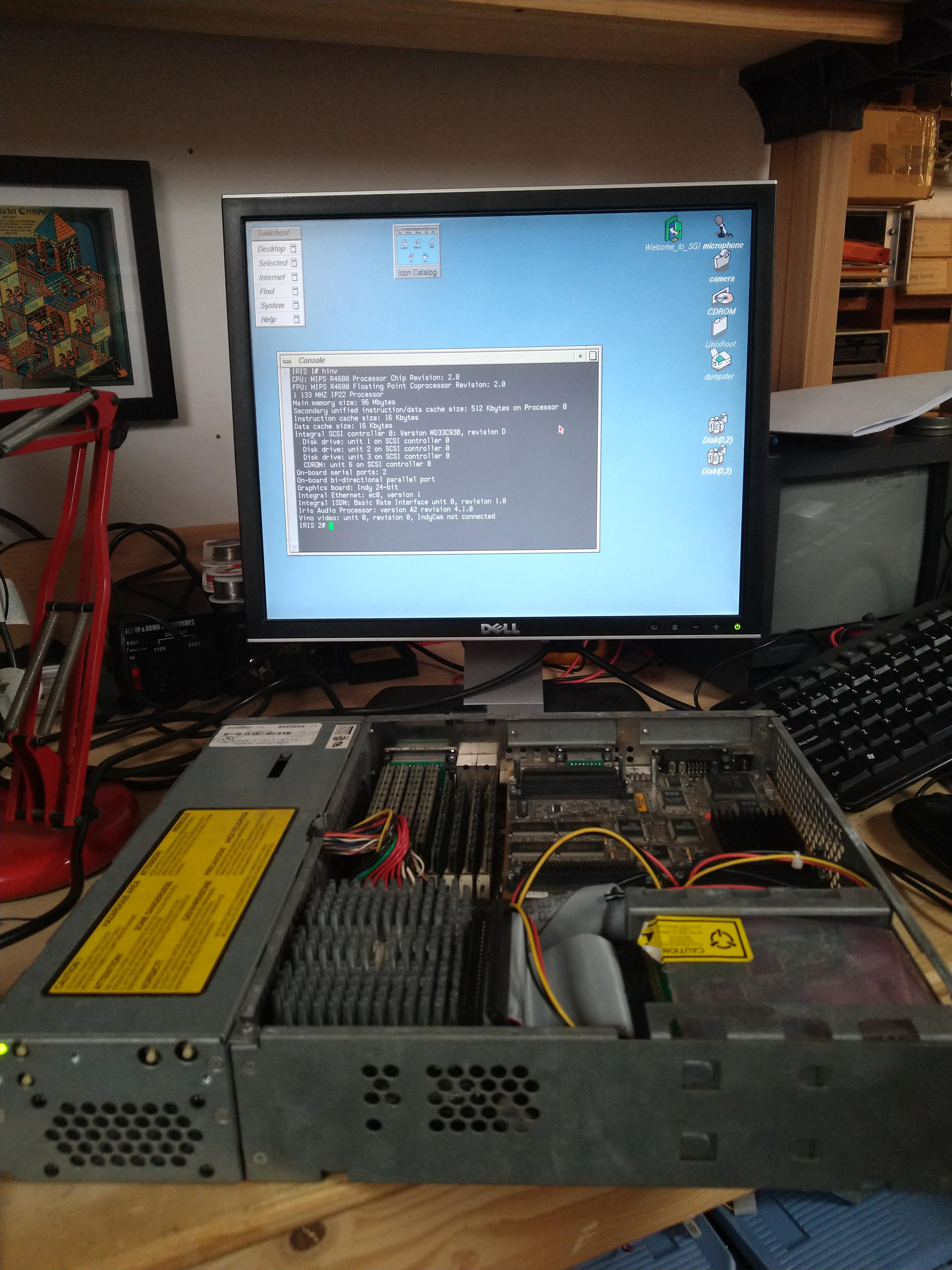 Thanks for the feedback!
I had tried to remove some packages in the installer, but wasn't really able to reduce as much as needed, and after all the resulting dependency warnings were resolved, almost everything was selected for installation again.
I will try to get a bigger disk. SCSI2SD is a bit too expensive for this little machine, I rather go for a real disk and keep the SCSI2SD for my other machines.

Hard to find cheap disks where the seller also ships to Switzerland from abroad.. so I have now ordered two additional SCSI2SD from the U.S.
Reactions: mamorim01

flexion said:
Hard to find cheap disks where the seller also ships to Switzerland from abroad.. so I have now ordered two additional SCSI2SD from the U.S.
Click to expand...

Cool. Somebody posted some info on the performance of the v6 when used on an Indy, I based the decision to use mine on this thread and I have not been disappointed.

The host: a R5K/180 Indy. Note: the Indy and scsi2sd required a terminator on the external scsi port. I don't normally leave one there, but the system would hang and crash without it. The adapter: SCSI2SD v6. SCSI2 turned on. Parity turned on. Set to 10MB/sync. 2GB allocated in the...

There is a 6.5.22 image online available for download in MAME's internal disk format (CHD). If you need something quick to spool up a machine rather than going through the installation process, you can download this file, convert it using mame-tools, and simply dump it on an SD card using dd. In less than five minutes you can have an SD card fitted with either 6.5.22 or 5.3. I *think* it is configured to use the 24bit graphics card option, but it should otherwise work okay with most Indy's configurations.

mamorim01 said:
There is a 6.5.22 image online available for download in MAME's internal disk format (CHD). If you need something quick to spool up a machine rather than going through the installation process,
Click to expand...

oh cool, didn't know that! Thanks for the hint.

I already have a SCSI2SD v6 in the Indigo2 Impact and am quite happy with it. It's just odd that the SD adapter costs more than the Indy

flexion said:
I already have a SCSI2SD v6 in the Indigo2 Impact and am quite happy with it. It's just odd that the SD adapter costs more than the Indy
Click to expand...

It doesn't really need to get in the Indy and die with it. I have a few SCSI2SDs, both v6 and v5, which I rotate between equipment. If need be you can just pull it out, keep the SD with the existing OS, and use the board elsewhere. The v6 keeps the config on the same SD card so it is really versatile for such use cases. The v5, on the other hand, is cheap enough (around 65€ locally) to be left with the machine on a more permanent basis, if you can live with its more reduced speed and bandwith. I guess there are different use cases. What I really find convenient is the possibility of dumping the SD drive image on a Linux box once you have done the initial setup, it is very easy to spool up machines at a later stage and not have to go through a lengthy installation process.
Reactions: Elf

mamorim01 said:
It doesn't really need to get in the Indy and die with it. I have a few SCSI2SDs, both v6 and v5, which I rotate between equipment.
Click to expand...

that sounds good, glad you mentioned that. I was actually a bit scared to destroy the work I invested in setting up the indigo2, as I wasn't sure if config is solely stored on the SD or also on the adapter itself, so I just left it in there, not even attempting to try to use the adapter temporarily in another box.