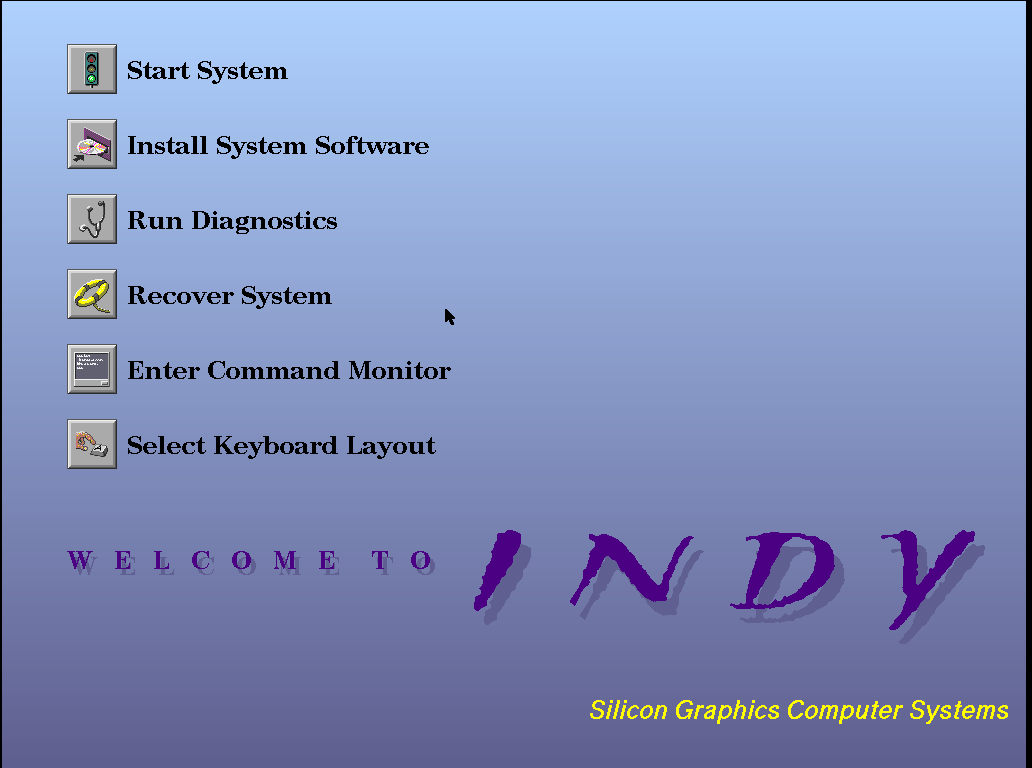 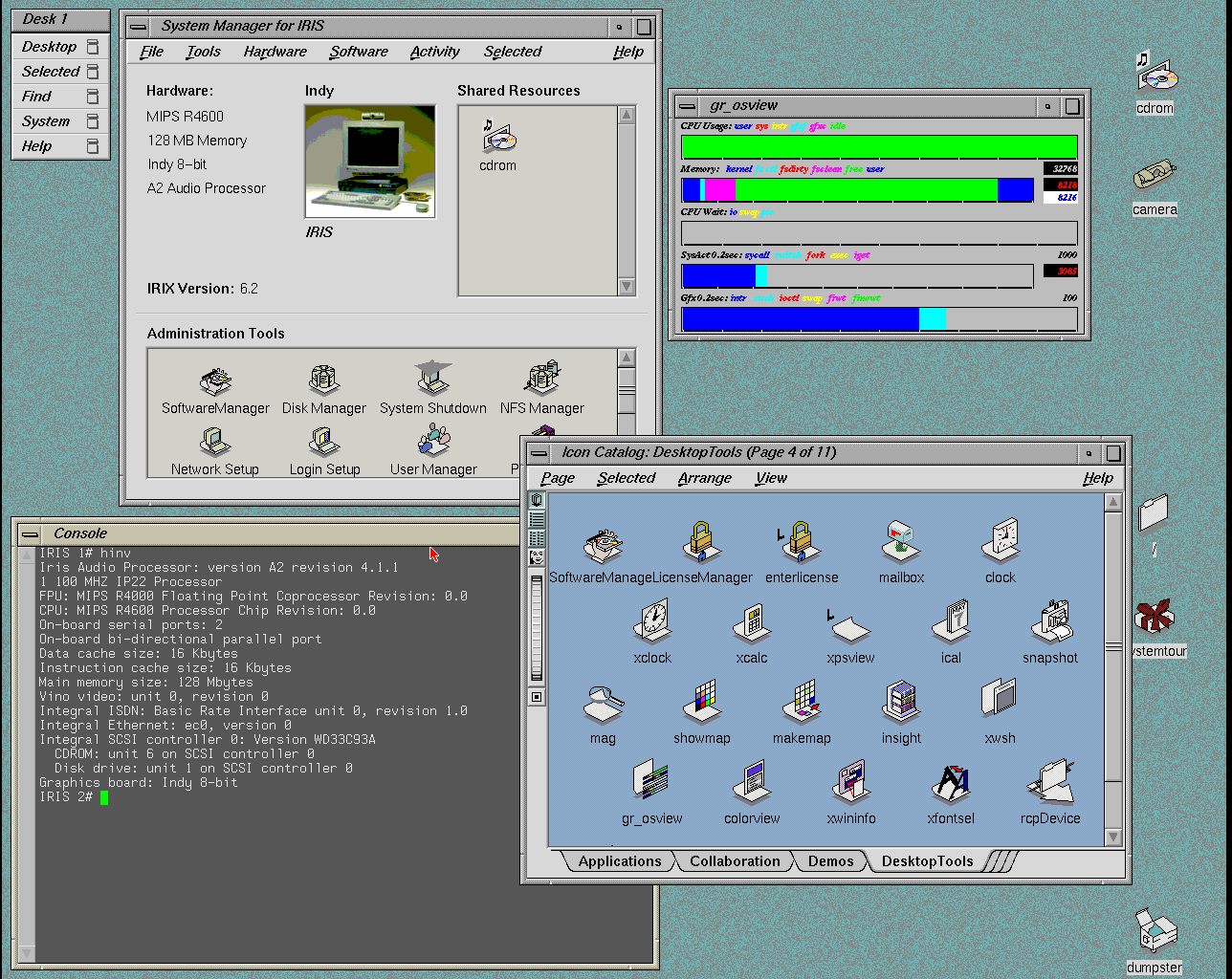 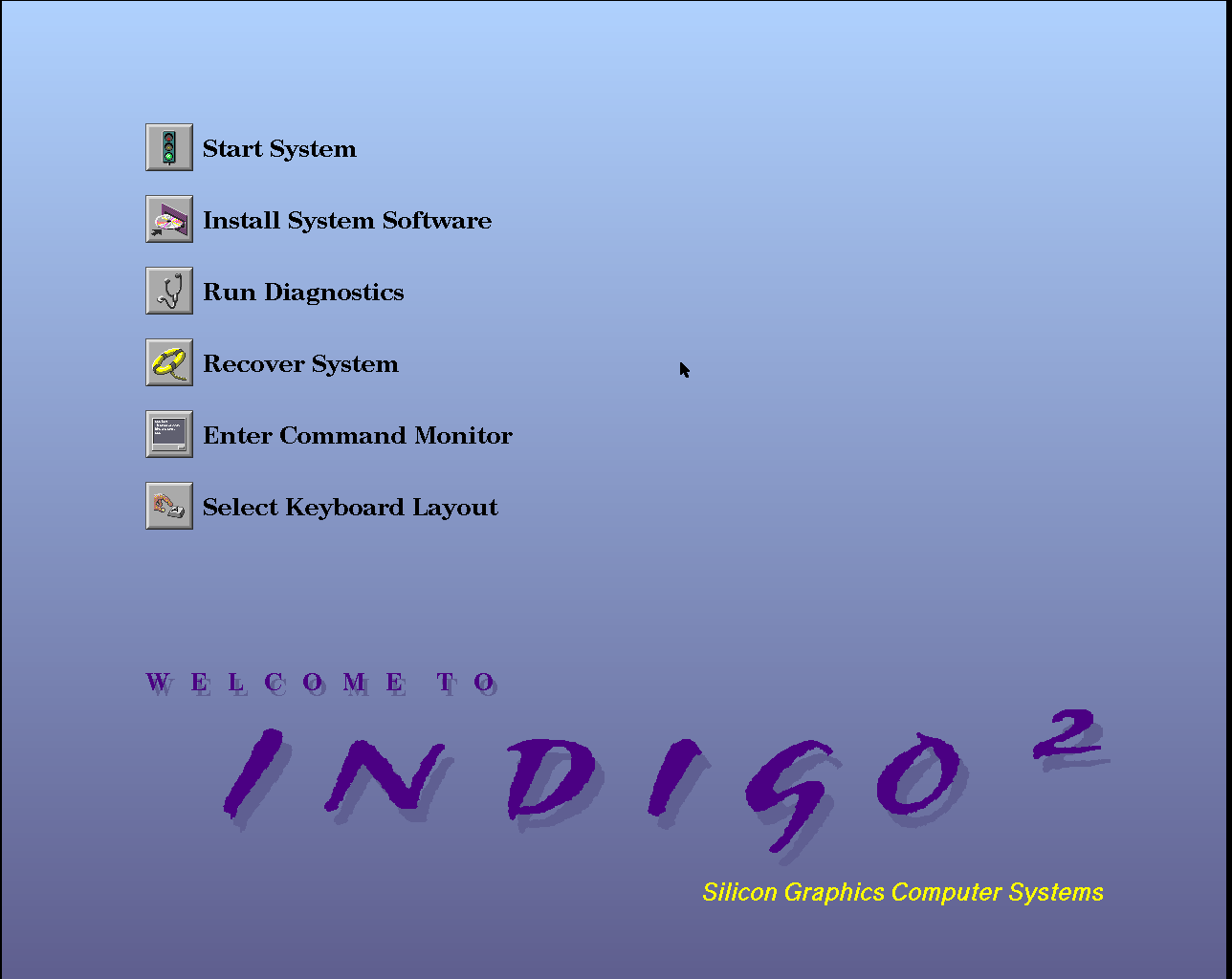 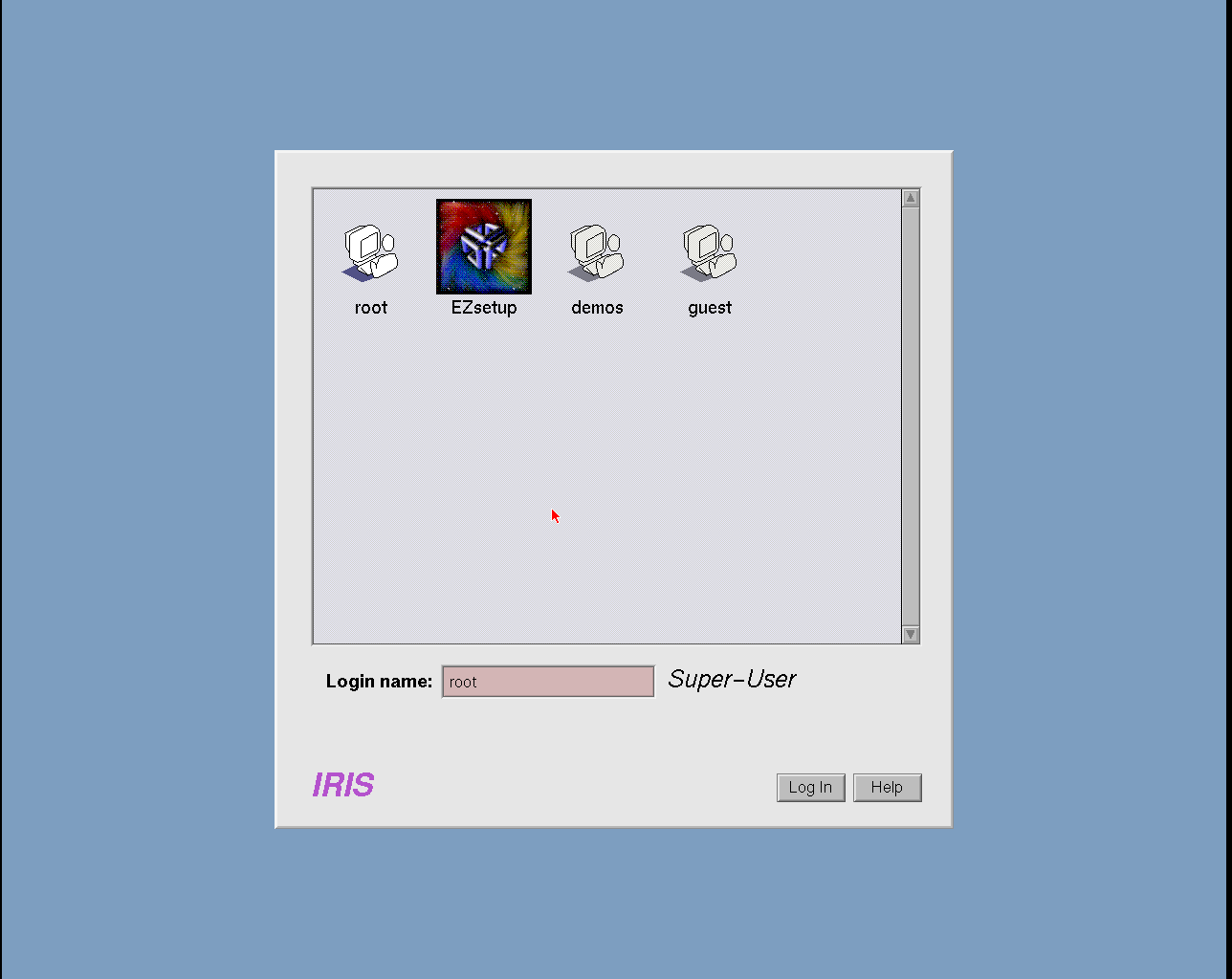 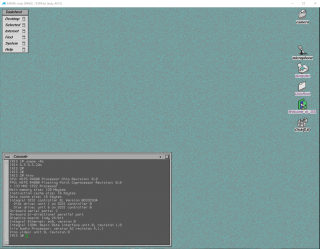 This is the command line being used for this shot (I excluded -cdrom1 option to avoid any possible hangups but the hinv output is the same with or without -cdrom1):

I have allocated a 36GB HDD and it's running 24-bit graphics.

I have done a full install of IRIX 6.5 (including Freeware and SoftWindows95) and then did a full upgrade (not yet included any extras, just IRIX) to 6.5.22.

It was quite tedious because in MAME 210, the mouse was slow and jerky and then, the left-mouse button did not work however, whenever the mouse moved along the X-axis from left-to-right, a left-button-click event would fire and sometimes hold and this would happen randomly. So, if I wanted to click on a button in a window, I would first need to move the mouse right-to-left to position it just to the left of the button that I wanted to press then, I would slowly drag the mouse left-to-right horizontally and it would magically press the button for me as I dragged the cursor across it ... I installed 6.5.22 under those conditions and it's taken a long time, not to mention the thirty-or-so times that MAME would randomly lock up part way through the install (which in itself took just over 4 hours to complete!).

P.S. Big Thanks goes out to all the devs who have made this possible! Thanks heaps!
Last edited: Aug 25, 2019
Reactions: gijoe77, foetz and Elf

Sounds a little rough but it's great to hear that things have gotten this far; holds a lot of promise

I too decided to give this a whirl. I'm using macOS, and installed this via the standard brew formula. Some tips:
Lo and behold, it's rather glacial, but sure is cool! 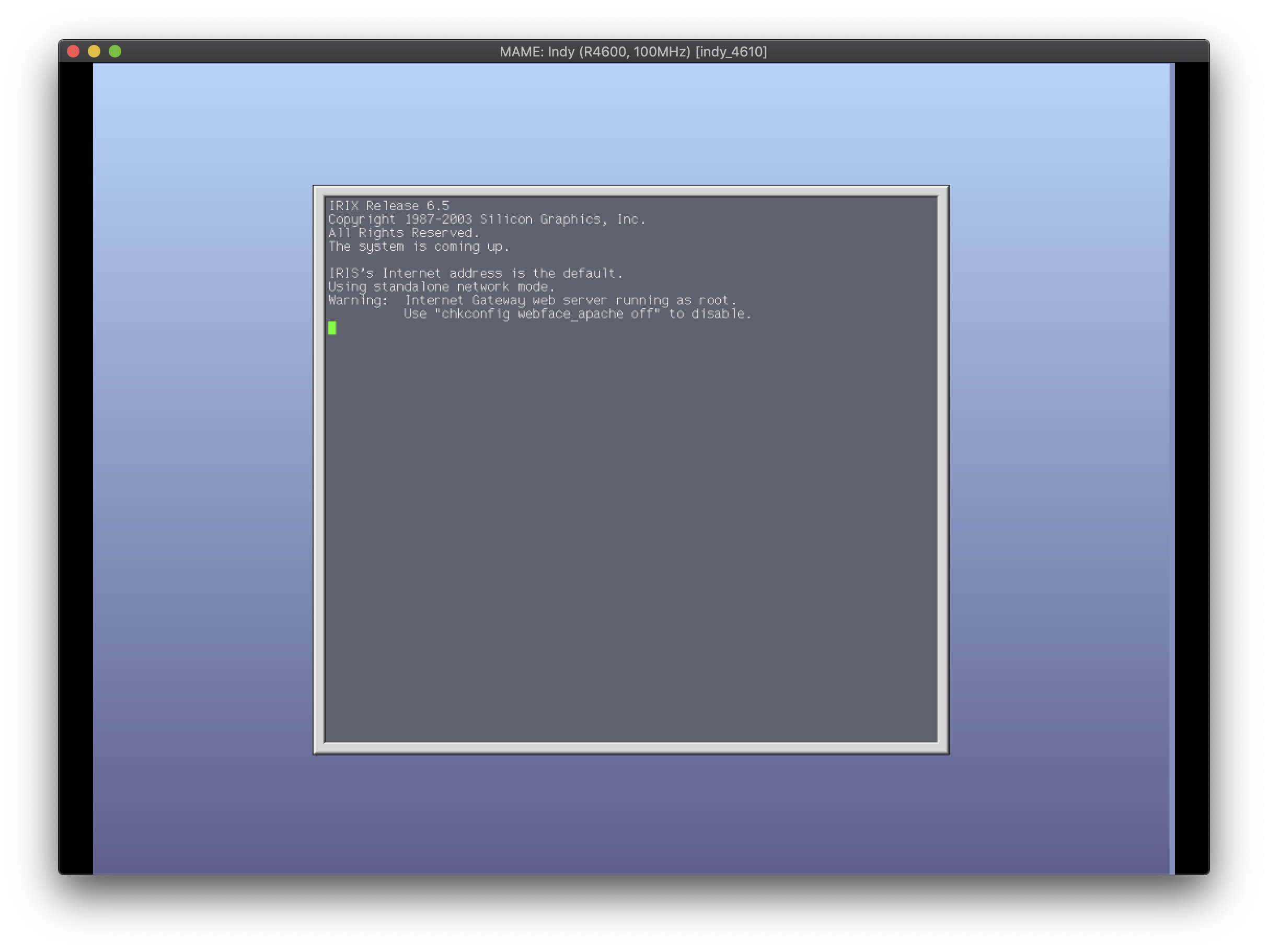 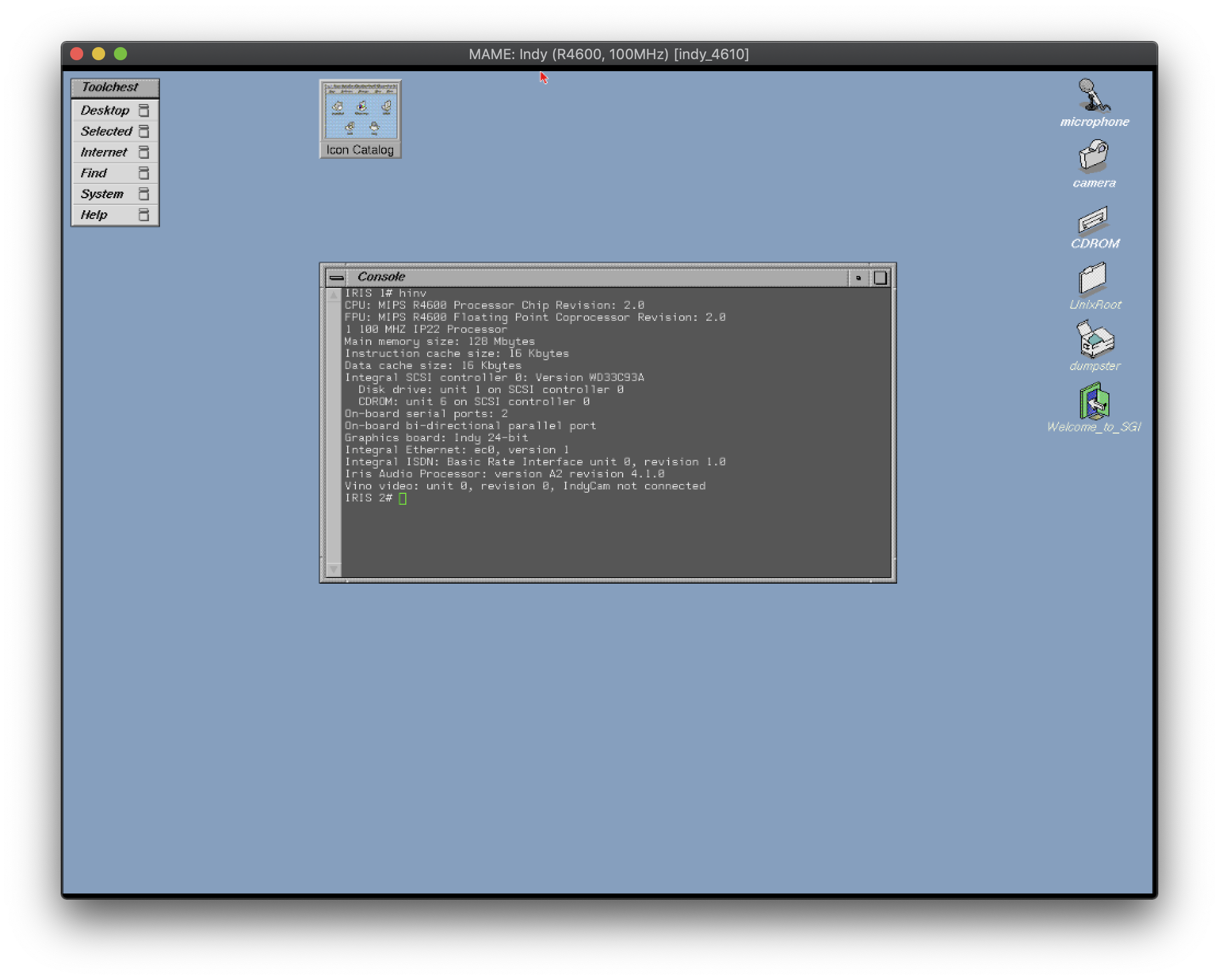 I really want to emulate irix w/ CDE because I am obsessed with it.
I want to dump its various resources (pixmaps, scripts, icons etc)
They are beautiful. Any advice on achieving this..? must I buy a machine for it?

spinnantude said:
I really want to emulate irix w/ CDE because I am obsessed with it.
I want to dump its various resources (pixmaps, scripts, icons etc)
They are beautiful. Any advice on achieving this..? must I buy a machine for it?
Click to expand...

I would always recommend a machine because it would run much faster than MAME, and I suppose it would be much easier.

Can you do it with MAME? I'm sure you could but I don't know how many people can really help you if you run into a strange issue
You must log in or register to reply here.
Share:
Facebook Twitter Reddit Link
Top Bottom